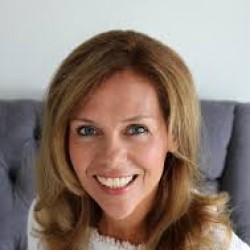 Adele Parks was born in Teesside, North East England. Her first novel, Playing Away, was published in 2000, and since then she's had seventeen international bestsellers, translated into twenty-six languages. She's been an ambassador for The Reading Agency and a judge for the Costa Book Awards, and is a keen supporter of The National Literary Trust. She's lived in Italy, Botswana, and London and is now settled in Guildford, Surrey, with her husband, son, and cat.

Adele Parks is a best selling novelist. In 2000 she published, Playing Away which became the best selling debut of that year. Since then she has written 12 novels in as many years, all of which became Times Top Ten bestsellers; she’s published in 25 different languages.

Adele’s popularity comes from her witty, up-front, tell it as it is style that deals with issues that are relevant to women today: the issues of love, motherhood, friendship, fidelity…

Describe a typical day for you?

The alarm clock goes off at 6.30 am which I think is indecently early because I’m a sleep fiend. I just can’t get enough of it! We all breakfast together then my husband does the morning school run.

This gives me time for a quick swim and shower before I’m at my desk by 8.30. I work pretty solidly, until 1pm. The mornings are when I do my best writing. My husband, Jim, is the Creative Director for Guildford Book Festival so he works from home too. We’re lucky, it means we get to see a lot of each other. At about 1 we start asking each other, “Whose going to make lunch?” He usually breaks first and cooks!

After lunch I’m more likely to do admin than write. I might have an interview or some research to complete; I might have a marketing task, contracts to look at etc. I pick my son up at 4 and then the evenings are dictated by his activities (I think this is the norm for lots of parents!).

Either he has homework or I spend a far bit of time ferrying him between music, drama and sporting activities! Jim and I have a date night at least once a week (usually Wednesday). While our son is at his drama club we go out for a meal, a glass of bubbly (at least in my case – Jim is teetotal) and we have a relaxed catch up.

We always say we’re not going to talk about work, we invariably do! We’re both workaholics. I read every night before I fall to sleep. Book buying is my hobby!

What do you feel are your biggest achievements?

I’ve written and published a book a year since 2000, believe me this isn’t a case of churning them out. Nothing could be further from the truth. In a way the more I write the harder it gets because I’m obsessive about writing a better novel each time. I’m hard on myself so writing 13 novels in 13 years all of which I’m immensely proud of, is a huge achievement. However, I have one son, he’s 12. He’s a strong, honest, polite, funny, feminist kid. He regularly turns to me and declares, “I love my life, I’m so happy.” There is no greater achievement.

What’s in your handbag?

Not much, I’m a beauty free zone. It’s not that I don’t like pampering and make up and such – I love it! But I’m the sort of woman who does all that stuff in the morning and then forgets about it for the rest of the day. I always carry, purse, keys, phone, a novel to read, a notebook and pen. That’s it. I wish I could name some amazing brand of hand cream or profess a passion for a particular shade of lipstick that I can’t leave home without but I’d be lying.

What are your ambitions in life?

Interesting one because when I was a young girl and all the way until my 20s I was fiercely ambitious about getting a novel published. I wanted to design and build my own house and I wanted to fall madly in love and have a huge family. My family is very small but I have achieved everything else. I’m incredibly lucky. I guess my overall ambition is that I’d like to continue writing books that my readers feel are getting better and better.

Where do you see yourself in five years time?

Since we have just built our home I can’t imagine a move within the next five years (or for a long time after that, I tell everyone I’m not leaving here except in a box) but between now and then I hope to still be travelling, writing, enjoying my family and friends. I’m in a good place, both emotionally and physically so I’m happy to be left right where I am!

What advice would you give a budding novelist?

My first big tip for writing a novel is ‘get writing’. So many people say to me that they want to write a novel but in fact never write anything longer than a shopping list. Try to write something every day, even if it’s just for ten minutes and even if you’re not in the mood.

If you’re stuck for something to write about set yourself tasks, such as describing what you can see if you look out of the window, or your earliest memory or how a new dish tastes. It doesn’t matter what you write, or even if you ever use the exercises in your novel, it simply develops discipline. Also, do remember to have fun. It shows. If you don’t enjoy what you’re writing, no reader will enjoy reading it.

Try showing someone your work but don’t take offence at any comments they make. Remember you asked them, they’re doing you a favour reading it and it’s a difficult job. Be humble. Accept both praise and criticism with an equally open mind and act upon them where necessary. Finally, develop a thick skin.

Chances are you will get some knock backs along the way but don’t ever give up hope. If you have a talent and you are persistent it will pay off eventually, I promise. Some of the reasons for rejections are because an agent’s books are full, or your work is too similar to another author or not like the other authors that particular agent represents!

A rejection doesn’t necessarily mean that your work isn’t any good. Be realistic. Remember that there are thousands of new titles published every year. Don’t give up – but don’t expect instant success either.

Whatever It Takes is published by Headline £6.99. The State We’re In will be published 4th July. To find out more about Adele or sign up for her newsletter visit www.adeleparks.com or follow her on Twitter @adeleparks