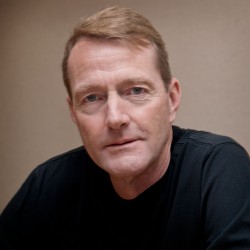 Lee Child was born October 29th, 1954 in Coventry, England, but spent his formative years in the nearby city of Birmingham. By coincidence he won a scholarship to the same high school that JRR Tolkien had attended. He went to law school in Sheffield, England, and after part-time work in the theater he joined Granada Television in Manchester for what turned out to be an eighteen-year career as a presentation director during British TV's "golden age."

During his tenure his company made Brideshead Revisited, The Jewel in the Crown, Prime Suspect, and Cracker. But he was fired in 1995 at the age of 40 as a result of corporate restructuring. Always a voracious reader, he decided to see an opportunity where others might have seen a crisis and bought six dollars' worth of paper and pencils and sat down to write a book, Killing Floor, the first in the Jack Reacher series.

Killing Floor was an immediate success and launched the series which has grown in sales and impact with every new installment. The first Jack Reacher movie, based on the novel One Shot and starring Tom Cruise and Rosamund Pike, was released in December 2012.

Lee has three homes—an apartment in Manhattan, a country house in the south of France, and whatever airplane cabin he happens to be in while traveling between the two. In the US he drives a supercharged Jaguar, which was built in Jaguar's Browns Lane plant, thirty yards from the hospital in which he was born.

Lee spends his spare time reading, listening to music, and watching the Yankees, Aston Villa, or Marseilles soccer. He is married with a grown-up daughter. He is tall and slim, despite an appalling diet and a refusal to exercise

Q. In the novel “Jack Reacher, Never Go Back” the woman occupies an important role. Why?

A. Because women occupy important roles in all the Reacher books - indeed, in all our lives. In this particular case, I wanted to explore the tension inside a relationship that was partly romantic and partly professional. Reacher has to defer to Turner, partly out of politeness, and partly because of her status.

Q. You have also worked on the movie with Tom Cruise?

A. I had no official role in the production, but I visited the set many times, and have a small cameo role on screen.

Q. If you were a character in a novel, what action would you take?

A. If I could get away with it, I would do what Reacher does.

Q. Night School is the only recent novel on Jack Reacher set in years ago, in 1996. How come?

A. It’s a prequel, set twenty years ago, in 1996. Reacher is still in the army. I wanted to explore that period when we knew we were facing a new type of security threat, but weren’t sure exactly what it was. I find it very interesting that government agencies were prepared to admit they were facing something they didn’t yet understand, or know how to deal with. In the story, a single sentence has been overheard: “The American wants a hundred million dollars.” From who, and for what?

Q. You're English, but you went to live in New York. Why?

A. I love cities, and New York is the greatest of all.

Q. When you do not write, how do you spend your day?

A. I’m very boring. I have no hobbies except reading. I am indifferent to food. I never take exercise. I’m always about ten years behind the curve when it comes to technology.

Q. At the beginning of your novels there are always actions, rather than descriptions (“I was arrested in Heno's diner. At twelve o'clock” - Killing floor; “Eventually they put Reacher in a car and drove him to a motel a mile away” - Never Go Back). Why?

A. Because I want to grab the reader at the beginning, with a sense of dynamic action, with the sense of questions to be answered.

Q. What is your favourite movie and why?

A. That’s a difficult question. Possibly “Seven”, which is very brave from the writing point of view.