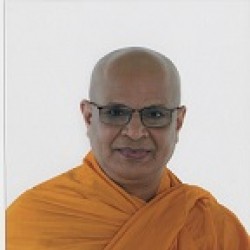 The Venerable Dr Walpola Sri Rahula was a Buddhist monk and scholar. He received a traditional training and education in his native Sri Lanka before studying at the University of Calcutta and the Sorbonne.

He held a chair at Northwestern University, Illinois, and was the Vice-Chancellor of Vidyodaya University, Colombo. He is widely regarded as one of the most qualified and enlightened scholars of the Buddhist tradition, with a deep knowledge of the original texts.