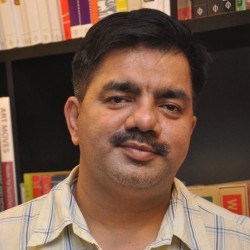 Hussain Zaidi is India’s number-one crime writer. He is the author of several bestselling books, including Dongri to Dubai: Six Decades of the Mumbai Mafia, Mafia Queens of Mumbai, Black Friday and My Name Is Abu Salem.

Aveteran of investigative, crime and terror reporting in the media, he has worked for the Asian Age, Mumbai Mirror, Mid-Day and Indian Express. He is also the associate producer for the HBO movie Terror in Mumbai, based on the 26/11 terror strikes. He lives with his family in Mumbai.

A Conversation With: Author and Journalist S. Hussain Zaidi

S. Hussain Zaidi, a veteran crime reporter and author, has covered the Mumbai mafia for nearly two decades and conducted the last published interview with the crime boss Dawood Ibrahim. Mr. Zaidi’s latest book, “Dongri to Dubai: Six Decades of the Mumbai Mafia,” published by Roli Books, is a historical account of the Mumbai mafia, and Mr. Ibrahim in particular, who is better known in India as the “Don” who runs the criminal organization known as D-company.

Mr. Ibrahim was declared a “global terrorist” by the U.S. Treasury in 2003, but Mr. Zaidi contends in his book that the mafia leader could play a crucial role in repairing relations between India and Pakistan.

Mr. Ibrahim is believed to be in hiding in Pakistan, and the Indian government has accused Pakistan’s Inter-Services Intelligence of protecting him, an allegation that Pakistan denies. L.K. Advani, a senior Bharatiya Janata Party leader, wrote on his blog earlier this month that he told Pakistan’s foreign secretary, Jalil Abbas Jilani, that if Pakistan handed over Mr. Ibrahim to India, “it can overnight change public perception in India about Pakistan.”

Mr. Zaidi penned “Black Friday” in 2002 about the 1993 Mumbai bombings, in which Mr. Ibrahim is suspected of coordinating 13 explosions that killed 250 people. The book was adapted five years later into a film by Anurag Kashyap. Ten chapters from “Dongri to Dubai” are already being adapted into a film, “Shootout at Wadala,” directed by Sanjay Gupta and slated for release early next year.

Mr. Zaidi talked to India Ink in Delhi this week about his days as a crime reporter, writing cinematic books and the “Don” himself.

Q. How did “Dongri to Dubai” happen?

A. As a journalist we all try to score an exclusive; we all want to tell a story that has not been told before.

While working on Black Friday I realized that there is no extensive or exhaustive history on the Mumbai underworld. Nobody, not a journalist or researcher or academician had ever bothered to document the incidents that have happened in Mumbai since independence. Why? The Mumbai mafia is no less notorious than Italian mafia, but because Hollywood has glamorized the Italian mafia, we hear so much about it. Hindi movies keep adapting “Godfather” and other movies based on the Italian mafia.

When I started writing the book, I did not realize that it would turn out to be such an epic journey. Initially I thought I would write just a few biographies of some dons like Haji Mastan, Karim Lala and, of course, a few chapters about Dawood.

First you write the book and then the book writes you. It took me seven years to complete this book which has more than 60 chapters.

A. My life as a crime reporter was very uneventful. When I joined The Indian Express, my boss asked me to cover crime. I was just a rookie reporter back in 1995 and I did not have much of a choice; he did not have a good crime reporter on his rolls at that time. I did not know that I would unwittingly start a new trend.

In those days, unlike today, crime reporters were more like police stenographers. They used to go, sit in the press conference, come back, write their stories, file them, with no corroboration, no cross-checking of the facts, no getting the other side’s version.

Since I was new and very scared that I would do a bad job and get thrown out by my editor, insecurity drove me to do a good job. I started chasing the other side, giving the other version, and I realized that people started appreciating it because nobody was doing it at that time, from Times of India to anyone. The Indian Express started the trend.

A couple of years later [author] Vikram Chandra approached me. He wanted a crime reporter to help him write a book. We met, we started hanging out together, and while I was helping him for his “Sacred Games,” he put me on to [the publisher] David Davidar. And “Black Friday” happened.

Q. Is crime reporting as thrilling and glamorous as it is made out to be?

A. Crime reporting is very boring. Who enjoys talking to bad guys whose every line is full of expletives and who will never start a sentence without them? I come from Lucknow where we speak chaste Urdu. It was a culture shock for me.

These gangsters want to scare people; they want people to be intimidated. I was one mad guy who was not scared. Even when writing a book on Dawood I was not scared. Dawood is not a god for me. He is one “galli ka gunda” [a gangster from the street] who later became a big don.

Q. Do you remember any particular time when you did feel threatened?

A. I once got a call while working at Mid Day where this guy says, “We know you have a 6-year-old son and we know that you love him very much. We are also aware where he goes to school.”

I said, “Yes, he does. He goes to Saraswati Vidyalaya and he is in class one. Should I give you the address?” The man replied, “Mister, lots of accidents happen in this world.”

I told him, “As long as God is alive in this world, I will not meet with such a mishap. The day you become more powerful than God, I will become scared of you.”

The man had nothing to say.

But of course I was scared. I could not sleep for some time after that. I did not send my son to school for two days!

Q. Your friend and colleague Jyotirmoy Dey was shot dead last year and your fellow crime reporters are being investigated in that case.

A. Mr. Dey was my favorite prodigy. I taught him crime reporting. In 1995, when he joined The Indian Express, he said he wanted to do crime reporting and in turn he would teach me how to do weight lifting.

When I saw Mr. Dey’s dead body on June 11, 2011. I have seen a lot of dead bodies. I have seen dozens of dead bodies, but J. Dey? He was 6 foot 3 inches, when I used to look at him, such a strong muscular man; I thought he would never die. It was incredible sight to see him dead.

Who killed him is really a mystery, but I don’t think the mafia is behind his killing.

Q. What has surprised you most in your years of reporting about the underworld?

A. I have met lots of criminals. I always knew that these guys are very uncouth people, who use lots of expletives and that their conversations are not that of a civilized world. What surprised me when I spoke to Dawood was that the man was very polite, well mannered, soft spoken and civil. Not once in his 45-minute conversation with me did he use a single expletive.

It was not the image that I had. I thought Dawood had to be a flamboyant guy, have a cigar tucked in his mouth. But he was nothing like that. he was saying things like, “Main kya aapko Public Enemy Number One lagta hoon? Mere baare main Outlook ne yeh likha hai?” [Do I look like Public Enemy Number One to you? Outlook had carried a piece calling me that.”] He told me he was not involved in the Bombay [now Mumbai] blasts. That is what he was saying, but in a very nice way.

I thought maybe he was trying to put up a facade for a journalist, but being a don of such notorious stature, I don’t think he needs to put up a facade. We have not spoken since this interview I did for Indian Express in 1997.

Q. You have written about the connection between Bollywood and the mafia. Has that caused problems for you?

A. The film industry people are shameless people — anything they do or say is like water off a duck’s back.

Q. Are you currently working on something new?

A. I have two books lined up. One of them might come out by next year. The first, “Headley and I,” I am co-authoring with Rahul Bhatt. [Mr. Bhatt was a fitness trainer for David C. Headley, an American who confessed to helping plot the 2008 terrorist attack in Mumbai.] It will be published by  HarperCollins.

It is the inside story of David Headley from two angles. One is what the National Intelligence Agency learned through its 30-hour-long interrogation and subsequent investigation, and the other perspective is through Rahul Bhatt, who spent thousand hours with David Headley in Mumbai.

This interview has been lightly edited and condensed.