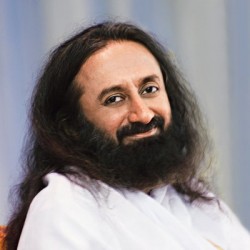 Sri Sri Ravi Shankar is a renowned spiritual leader and global humanitarian whose mission of uniting the world into a violence-free, stress-free global family has inspired millions of people to broaden their share of responsibility and serve society.

Sri Sri has devised practical tools and techniques that help individuals achieve calmness of mind and clarity of thought. Such a state of mind empowers individuals not only to achieve their goals, but it also instills a sense of service and greater connectedness with humanity.

In 1981, Sri Sri established the Art of Living Foundation, an educational organization with a presence in more than 150 countries. The Foundation's self-development programs offer powerful tools to eliminate stress and foster a sense of well-being.

In 1997, Sri Sri founded the International Association for Human Values (IAHV), a humanitarian organization, which advances human values such as compassion, caring and commitment in political, economic and social spheres.

IAHV and the Art of Living Foundation collaborate on humanitarian initiatives, which include conflict resolution, disaster and trauma relief, environmental conservation, prisoner rehabilitation, youth leadership, women's empowerment, campaigns against female foeticide and child labor, and supporting education for all.

Sri Sri Ravi Shankar is an internationally known spiritual teacher whose Art of Living programs and humanitarian efforts have affected millions of lives. I had the opportunity to interview him during his recent visit to Los Angeles. Here are excerpts from that interview. (The photo was taken on a previous occasion.)

Q: The International Day of Yoga is June 21. Where will you be?

Sri Sri: New York. I’ll be speaking at Lincoln Center. I think it’s very much in the DNA of America to do yoga. It can bring health, sharpness of intellect, creativity, emotional stability and a broad vision, which America has always stood for. The U.S. is a very progressive country, very dynamic, very forward thinking.

Q: What would you like people to know about Yoga?

Sri Sri: Yoga is like a vast ocean. You can just go for a breeze, or you can go with an oil rig and drill for oil … Yoga offers many things to different people at many different levels–whatever they aspire for: union with the cosmic consciousness, or physical health, mental clarity, emotional stability, spiritual ecstasy — all this is part of yoga.

Q: Does it concern you that people think of Yoga only as asana [the familiar physical postures]?

Sri Sri: Not really, because at that moment that’s what they understand. But once they start doing asana they start seeing there is something beyond that. If interest for meditation gets kindled, then they are on the right track. But if it stops at exercise … it’s not bad, but they will not reach the goal.

Q: When people think of the classic eight limbs of Yoga…

Sri Sri: I knew you would ask about that. Unfortunately, people think the eight limbs are eight steps, one after another. You know, when a baby is born it’s not that one limb develops after another. All the limbs develop simultaneously. The eight limbs of Yoga are so interconnected, if you pull one all the others will come along with it.

Sri Sri: The limbs are not sequential, they are all together. The practice of the others contributes to the ability to observe the yamas and niyamas. When we teach meditation in prisons, we see that the moment they have a taste of meditation, their whole thought process and behavior pattern changes. They start on the path of non-violence. They become very truthful, and the tendencies to cheat disappear. So the yamas and niyamas start happening in people’s life just when they begin meditation.

Q: How do your Art of Living programs fit into the eight limbs of classical Yoga?

Sri Sri: Yoga would be incomplete if even one limb is absent from it. All the eight limbs coexist. Our program is the same way. We do some asana, and some pranayama-breathing exercises-and meditation that leads to samadhi [the 8th limb; not a practice but a state of consciousness transcending thought].

Q: Dharana and dyana are the sixth and seventh limbs. How do you explain the subtle distinction between the two?

Sri Sri: One leads into the other. Dharana is having the attention on a particular thing, and dyana is how the mind from there dissolves into samadhi.

Q: A lot of people translate dharana as concentration.

Sri Sri: Absolutely not. Concentration is an outcome of meditation. Dharana is attention — not tension; in concentration there is tension [laughs].

Q: Have you run into opposition or resistance in the U.S.?

Sri Sri: In the beginning we had a lot of resistance, and prejudice. But it’s much better now. Yoga is much more accepted. Today, car companies use meditation and yoga postures to sell their products.

Q: How is the acceptance of India’s spiritual traditions in India itself, as the country modernizes?

Sri Sri: The younger generation is taking to it now. One generation previous was a little skeptical. The media also played a role. Now it’s different. People see the practical benefit.

Q: There is a lot of concern in the press about the protection of religious minorities in India.

Sri Sri: I think the fear is unfounded. Minorities have always been in good favor in India. For centuries they have been protected. The people-to-people connection is very good. There is a certain amount of polarization for sure, but not to the extent that minorities should be afraid of anything.

Q: What about the conversion issue?

Sri Sri: I think conversion should be from head to heart, not from one religion to another religion. I feel people should become more spiritual — rise above the religious differences and come together in the spirit of vasudhaiv kutumbikam: The world is one family.