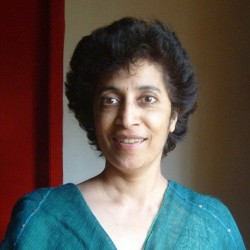 Kavitha Mandana started her writing career in advertising. She began writing and illustrating for children after her daughter was born nineteen years ago. She has written extensively for the Deccan Herald`s children`s supplement and its school edition.

Her books for kids include 'Venireman' and 'Akbar, the mighty emperor' published by Puffin; 'No 9 on the Shade Car' for young adults, from Rupa's Red Turtle and an early reader from Karadi Tales --'A Pair of Twins'.

Her most recent book is for ages 10 and above. It's called 'Trapped', about siblings Anandite and Arjun, growing up with a secret ghost brother.

Her short stories have appeared in many anthologies -- 'Let's Play' and 'Funny Stories' from Puffin; in 'Whispers in the Classroom,

Voices in the Field' from Wisdom Tree; in 'Monsters under my Bed and other stories' from Unison Publications and in a number of text book readers.