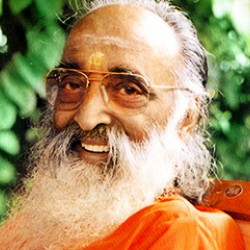 Swami Chinmayananda Saraswati (born Balakrishna Menon; 8 May 1916 – 3 August 1993) was a Hindu spiritual leader and a teacher who inspired the formation of Chinmaya Mission, a worldwide nonprofit organisation, to spread the knowledge of Advaita Vedanta, the non-dual system of thought found in the Upanishads, which epitomise the philosophical teachings of the Vedas.

Chinmayananda is known for teaching Bhagavad Gita, the Upanishads, and other ancient Hindu scriptures. From 1951 onward, he spearheaded a global Hindu spiritual and cultural renaissance that popularised the religion's esoteric scriptural texts, teaching them in English all across India and abroad.

Chinmayananda inspired the formation of Chinmaya Mission program (CVP) in 1953. Founded by his disciples and led by him, it is a spiritual, educational, and charitable nonprofit organization that encompasses more than 300 centres in India and internationally.[citation needed] He authored 95 publications, including commentaries on the major Upanishad and Bhagavad Gita. He was a visiting professor of Indian philosophy at several American and Asian universities and he conducted university lecture tours in many countries.