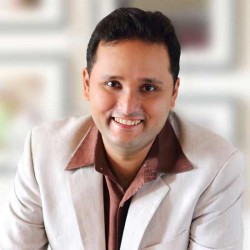 Amish Tripathi was born in Mumbai and grew up near Rourkela, Odisha. He is an alumnus of St. Xavier's College, Mumbai and Indian Institute of Management Calcutta. He worked for 14 years in the financial services industry, in companies such as Standard Chartered, DBS Bank and IDBI Federal Life Insurance, before beginning his writing career.Amish is an IIM (Kolkata)educated, boring banker turned happy author.

The success of his debut book, The Immortals of Meluha (Book 1 of the Shiva Trilogy), encouraged him to give up a fourteen-year-old career in financial services to focus on writing. He is passionate about history, mythology and philosophy, finding beauty and meaning in all world religions.

Amish has most recently written the Shiva Trilogy (The Immortals of Meluha, The Secret of the Nagas & The Oath of the Vayuputras), which have sold over a million copies in the Indian subcontinent since 2010. The books that he plans to write in the future are also in the areas of mythology & history.

Amish lives in Mumbai with his wife, Preeti and son, Neel.

For Amish Tripathi, writing happened by chance. With Shiva’s Trilogy, he’s one of the best selling authors in the country today. In this interview, he shares with us his journey as an author

Banker turned mythological author Amish Tripathi’s Shiva’s Trilogy books are among the best sellers in the country today. But, becoming an author was never a part of his dream. As a child, he was inclined towards sports and academics. It was only around eight or nine years ago that the idea to pen a book came to him. What began as a pure philosophy thesis got converted into a series of adventure stories to convey the same philosophy. While he took about five to six years to complete his first book, Immortals of Meluha, he completed his second book, The Secret of the Nagas, within a year. And he wrote both when he was working. His third book in the Trilogy series, The Oath of the Vayuptras, was launched in the beginning of March and has already sold over four lakh copies. In fact, in association with musician Taufiq Qureshi and singer Sonu Nigam, Tripathi launched an album titled Vayuputras for this book with 10 original songs. He’s popularly known as the literary pop star. Not surprising as the Shiva Trilogy has sold over one and half million copies with gross retail sales of around Rs. 40 crore. The author is releasing the Immortals of Meluha in the U.S, Spain and Indonesia in 2014.  His publisher, Westland Ltd., has paid him an advance of Rs. 5 crore for his next series of books. Interestingly, Tripathi credits Lord Shiva for all the success he has seen.  He talks to The Smart CEO on the various influences in his life and his journey as an author.

What is the reason behind the success of your books?

Initially, when my first book was sent to the publishers, it was rejected by every one of them as I was told that everything was wrong with it. It was on a religious topic, which I was told the youth wouldn’t be interested in, and as my book had a modern and different take on religion, the older generation wouldn’t like it. I was told that this book had very little chance of success. Today, many people tell me that the reason my series has succeeded is that a familiar story has been built in a modern way and that the story is fast paced. Marketing activities may have also played a role in its success. Most importantly, I believe its success is the blessing of Lord Shiva.

What are the major lessons that you have learnt as an author after the first book was published?

When you pen a book, write it very honestly and from your heart. Writing as a profession is not very lucrative. So, if your aim is to make money, then you have to find another profession.  An author needs to be a pragmatic marketing person and must be closely involved with the marketing of his books and help the publisher make money.

There are many versions to a mythological story. How do you do your research and decide on which version to follow?

My good fortune was that I grew up in a very religious family. I learnt the Vedas, Upanishads and Qurans as a part of my childhood. We were encouraged to ask questions about scriptures. I learnt mythology and philosophy in an old fashioned way and hence I don’t have too many queries. However, I ask my family if I need to cross-verify something.

How has your belief in God changed since you became an author?

When I was young, I was very religious. In the early 90s, I did become an atheist for almost 10 to 12 years. In the process of writing my books, I returned to believing in god. But that’s only part of it. My entire character has changed; I am calmer and happier. This is a wonderful place to be.

You did a promotional video on your book and made your first chapter available to your readers. Why?

Many times there are new ideas because of the absence of anything better. I didn’t have anyone from the publishing industry guiding me. I had good marketing advisors – my wife, Preeti and friend, Abhinav – who did not have a publishing background. It was a blessing in disguise because there was no conventional wisdom which was constraining their ideas. They came out with innovative ideas which were never tried in publishing.

How do you deal with a writer’s block?