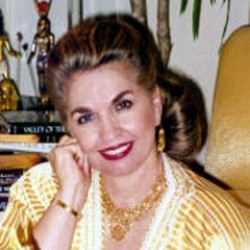 Jean Sasson was born in a small town in Alabama. An avid reader from an early age, she had read all the books in her school library by the time she was 15 years old. She also began her book collection at age 15. When given the chance to travel, Sasson accepted a position at the King Faisal Specialist Hospital and Research Centre in Riyadh, and lived in the Kingdom of Saudi Arabia for 12 years. She traveled extensively, visiting 66 countries over the course of 30 years.

Jean started her writing career in 1991 when she wrote the book, THE RAPE OF KUWAIT. The book was an instant best-seller, reaching #2 on the New York Times bestseller list. When the Kuwaiti Embassy in Washington heard that soldiers sent to free Kuwait did not know why they were there, the Embassy sent 200,000 copies to the region.

Later Sasson wrote PRINCESS: A TRUE STORY OF LIFE BEHIND THE VEIL IN SAUDI ARABIA, which is the story of a princess in the royal house of al-Sa'ud. The book was an international bestseller published in 68 different editions (also staying on the NYTIMES bestseller list for 13 weeks). Later Sasson wrote two sequels (DAUGHTERS AND CIRCLE). Please visit this link to read an interview with the author about her book "Princess": http://reith-jerevinan.blogspot.com/2....

the next year. Jean Sasson's official website is: www.jeansasson.com.

Posted on September 8, 2014by jeansasson

From writing Princess More Tears to Cry I can tell you that Saudi women are changing their world and that Princess Sultana is bringing their victories public.  Women are driving openly and taking their chances with the mean-spirited clerics, who like nothing better than to harass women.  But the big surprise is that the women of Saudi Arabia have a friend who is sitting on a throne, and the person on the throne is the very forceful king of Saudi Arabia.  Thus far, he has freed all the women who were imprisoned for driving and sentenced to floggings by the religious courts.  This is big news in their world and it is making women bolder than ever.  But all is not perfect because there are many powerful men in Saudi Arabia and some of these men do everything in their power to keep women in purdah.  So, even as we celebrate the happy stories, there are sad tales that will bring tears into the eyes of all but the most hardened.

This is the long awaited follow up to Life of Saudi Princess Sultana, so what you can tell us about this book?

I can tell you that Princess Sultana used to be the lone voice of women pushing for freedom, but now we learn that other women are gathering their courage and pushing back. There are many new heroines to celebrate in Saudi Arabia, and you will learn about 10 of those women in this book. Additionally, the many millions of readers who have fallen in love with Princess Sultana and her family will enjoy the heart-warming stories that centre around her three children, her three grandchildren, as well as other members of her family. So there is something for everyone in this, the 4th book in the series about Princess Sultana.

Please tell us about the process of gathering all the personal stories for this book.

This research and interviewing process was so very different from the past three books about the princess. Close your eyes and try to imagine a palace filled with women and children who all want to tell a writer something interesting that is happening in their country, one of the wealthiest nations in the world, yet, one of the most backward when it comes to the treatment of girls and women. It was in such a setting where I was told about the stories Princess Sultana wanted included in Princess, More Tears to Cry. Some of the stories came from the princess’ daughters, while others came from the princess. Honestly, it was a very noisy environment for a writer. I needed a quiet time to process facts, but that was not to be. Finally I found the secret to shutting out all the noise to hear only the person sitting in front of me. I focused my eyes on that person’s face and soon I could only hear that one important voice. But I will admit that I missed the old days when everything was so secretive and the princess and I were slipping around like spies from the cold war to get the information clear for me so that I could return to my home office, and carefully write books from the facts I had been given. While it is more fun now that the secret is out in her own family, it is quite the challenge for this writer!

This is your twelfth book so how much easier is your writing process with each new book you publish?

Each book I have written carries its own struggle. Therefore book number twelve was no easier or no more difficult than the previous eleven.

Please can you tell us about when you first met Princess Sultana.

I met the princess for the first time in 1985 at the Italian Embassy in Saudi Arabia. She was the only female royal I had ever seen at a western function so that fact alone caught my attention.

Everything of life was exciting then, because I was living in one of the most exotic kingdoms in the world. I had met other royal princesses when attending royal weddings, but nearly all the Saudi women I had come to know appeared quite shallow, with their interests centering only on designer gowns, expensive jewels and the latest royal gossip. To meet Sultana was quite the surprise, for she had important things on her mind. Almost instantly she began talking about the undesirable social issues affecting her country that had been plaguing my own mind for the past seven years since I first arrived in the kingdom. She talked. I listened. Our eyes locked and something told me she would be an important person in my future. She told me later that she felt the same. She invited me to visit her in her palace. Our friendship grew slowly, but within a year I was going with her on holidays to France where we truly bonded, mainly because we are both so passionate about the horrible ills affecting so many women of the world.

Why was it important to you to share personal stories of middle Eastern women for your career?

They became my subjects; I became their hope. I was living in the Middle East during a very important time for women in the region. And, don’t forget, in the early days most Saudis were open minded about westerners and wanted to get to know us. Therefore, I had access to many women, while most journalists had none. After all, in those days, most journalists were men, and no man would ever allowed in the circle of women. I believed, and still believe, that it is important for the world to know about the stories of women from the Middle East. In fact, I would have told these stories even if there was no indication they would be bestsellers.

What have been the most surprising things you have found when writing your books?

The commonality of the rich and the poor — all women, east and west, press against an invisible force trying to deny them freedom and subject them to the rules of men.

What is next for you?

I have five books on the drawing board. And so I will continue to write books that awaken others, so that I can pass the passion to create change to a new generation. To my mind, nothing is more important, because unless I am a walking miracle, I won’t live forever, and this is a struggle that is far from won.