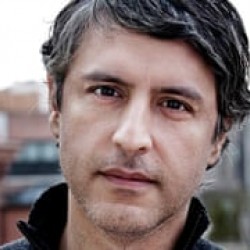 REZA ASLAN is an internationally renowned writer, commentator, professor, producer, and scholar of religions. His books, including his #1 New York Times Bestseller, Zealot: The Life and Times of Jesus of Nazareth, have been translated into dozens of languages around the world. He is also a recipient of the prestigious James Joyce Award.

In addition to his role as a Consulting Producer on the acclaimed HBO series The Leftovers and the upcoming Chuck Lorre comedy United States of Al, Aslan is also the host and Executive Producer of two other original television programs: Rough Draft with Reza Aslan on Topic, and CNN’s documentary series, Believer. He also served as an Executive Producer on the ABC drama, Of Kings and Prophets, and on the Emmy-nominated documentary series The Secret Life of Muslims. His book Zealot has been optioned by Lionsgate and producer David Heyman with a script co-written by Aslan and Oscar- screenwriter, James Schamus.

In 2006, Aslan co-founded BoomGen Studios—the premiere entertainment brand for creative content from and about the Middle East—which has provided an array of targeted services ranging from strategic messaging to grassroots marketing to publicity and social media outreach, to producers, studios, and filmmakers.

Aslan’s first book, International Bestseller No god but God: The Origins, Evolution, and Future of Islam, has been translated into seventeen languages, and was named one of the 100 most important books of the last decade by Blackwell Publishers. He is also the author of Beyond Fundamentalism: Confronting Religious Extremism in a Globalized Age (originally titled How to Win a Cosmic War), as well as editor of two volumes: Tablet and Pen: Literary Landscapes from the Modern Middle East, and Muslims and Jews in America: Commonalties, Contentions, and Complexities.

Aslan is a tenured Professor of Creative Writing at the University of California, Riverside and serves on the board of trustees for the Chicago Theological Seminary and The Yale Humanist Community, which supports atheists, agnostics, and humanists at home and abroad. A member of the American Academy of Religions, the Society of Biblical Literature, and the International Qur’anic Studies Association, Aslan’s previous academic positions include the Wallerstein Distinguished Professor of Religion, Community and Conflict at Drew University in New Jersey (2012-2013), and Visiting Assistant Professor of Religion at the University of Iowa (2000-2003).

Born in Iran, he lives in Los Angeles with his wife, author and entrepreneur, Jessica Jackley, and their three sons.

The Diplomat speaks with scholar and writer Reza Aslan.

The Diplomat‘s Sanjay Kumar spoke to Reza Aslan, whose book Zealot: The Life and Times of Jesus of Nazareth created controversy recently. An Iranian-American scholar of religion at the University of California, Aslan has been in the news ever since his first book No god but God: The Origins, Evolution, and Future of Islam was published in 2005. In that book, he advocates for a liberal interpretation of Islam and challenges the thesis of a “clash of civilizations.” In Zealot, Aslan argues for humanizing Christ. Many conservative Christians have questioned his intent and also doubted his credentials as a Muslim to write on Christianity. Aslan answers some of the questions related to the controversy.

How do you feel that your book, Zealot, has received so much attention?

There is nothing more satisfying for a writer than to know that people are interested in knowing what he is writing. I feel absolutely honored and blessed that I can come to a place like Jaipur and people are excited and want to know about my book and me; that is the greatest feeling in the world.

How you see the role of controversy in popularizing a book?

Over the course of the whole controversy related to your book, do you think that the content of the book was reflected accurately in the debate or not? Or was it just a controversy for the sake of controversy?

I think most people who hate this book have never read it. I get lots of email from the readers, who say that they bought this book with the feeling that they are going to hate it but on the contrary they enjoyed reading it. They say the book is actually a very moderate and respectful look at Jesus. In most of the cases people who react aggressively and violently are those who never bothered to read the book. How many Muslims do you think have actually read Satanic Verses … very few.

You have become a sort of Salman Rushdie figure for a section of conservative Christians.

Yes, kind of. You know, I have received seven or eight death threats from Christians — but again if you are going to write about religion for a living, you have to get used to this kind of threat. It comes with the job.

As the author, how you would explain to a layman the real content and intent behind Zealot?

It is an attempt to separate Christ of faith from the Jesus of history. It is an attempt to dig through the layers of theology and interpretations that surround the figure of Jesus and get to the man himself and to allow the world in which he lived to define who he is. That is what this book is all about.

Attempting this kind of discourse at a time when the world is passing through so much religious turbulence and when interfaith tolerance and trust is not that high was risky – don’t you think the timing was wrong or (as some would say) the intention was suspect?

I think people, particularly young people, are increasingly becoming disaffected with religion. Even if though they still want to have a sense of spiritual outlet, many young people will tell you that they are spiritual but not religious. Books like mine which challenge traditional religious views of either Jesus or Prophet Mohammed have become popular. People I think are thirsty for an alternative take on these incredibly important figures. When you treat them just as human beings—fallible, motivated by human interests and desires—that may offend religious people, but it excites other people who are interested in these people but not in the traditional stories told about them.

Christians complain that as a Muslim you don’t have authority and legitimacy to write about Christianity.

Why do you think that Jesus needs to be humanized? How did this idea come about?

Because when you turn a figure like Jesus into a detached celestial spirit, I think you lose the most important thing about him which is his humanity. If you think Jesus is God then his actions don’t really have much importance in human terms. If you think of him as a human being then all of a sudden it changes everything and he becomes someone worth emulating. I can’t emulate God; I can’t emulate a perfect being. But I can emulate a flawed human being trying to be good.

Then the question arises: how does myth become history and how does history become myth?

I think the most important thing to understand about people like Moses, Jesus, Mohammed and Buddha is that they are not the inventors of religion. Jesus did not create Christianity. Jesus was a Jew. Mohammed didn’t create Islam. The Quran clearly says that this is not the new message, this is the message given to all prophets before you. Buddha didn’t create Buddhism; Buddha was a Hindu. It was the followers of these prophets who created these religions. That’s where the separation first occurred between prophets and religions, between myth and history. To get to the history we have to find way to dig through the myth. That is what I tried to do in my book.

In India also there have been recent attempts to mythologize history and historicize myth by a certain section of Hindu fundamentalists to suit a particular political narrative.

I think what is happening is that ideas that are are identity and collective identity-based should be based solely on secular nationalism, which was the starting point of the 20th century and has started to collapse. All around the world, including in India, we are seeing a new kind of identity, a new kind of national identity based on religious conception. So when you listen to some of the Hindu right-wing BJP (Bhartiya Janata Party) guys, what they are saying is that the concept of a secular and multicultural India is false. To be Indian you have to be Hindu. You hear that in America. Christian nationalists say that America is a Christian nation and it is a country based on Christian beliefs and values and our laws should reflect that. In Israel you hear it all the time: it is not about the secular state of Israel. It’s about the Biblical land of Israel and we want all of it. That idea is very new idea and I think it is global and it is the result of a disappointment with secular nationalism.

How you react to the use of religion, say Islam, for subversive political activities? In popular consciousness, Islam has come to be associated with terrorism.

I called that in my first book Islamic Reformation.What is happening is that the power to interpret Islam over the last hundred years has steadily passed from the hands of Ulemas to the hands of individuals. This is what reformation means. When you individualize religion, what you create is a mess of different ideas and interpretations in conflict with each other. What you are seeing now in the rise of Al Qaeda and all these other groups are non-institutionalized versions of Islam. Bin Laden was an engineer, not an Ulema. Zawahiri was a doctor, not an expert on Islam. What they are doing is that they are challenging the traditional centers and traditional institutions of Islam and seizing for themselves the power of authority – issuing fatwas and and that kind of thing. For me it is important to understand that the phenomenon of conflict and violence in Islam is the result of this movement.

What do you see in the future of religion?