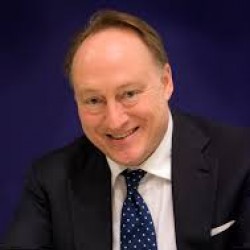 Andrew Roberts is the bestselling author of The Storm of War: A New History of the Second World War, Masters and Commanders: How Four Titans Won the War in the West, 1941-1945, Waterloo: Napoleon’s Last Gamble and Napoleon: A Life, winner of the Los Angeles Times Book Prize for biography and a finalist for the Plutarch Award.

He has won many other prizes, including the Wolfson History Prize and the Brit­ish Army Military Book of the Year, and frequently writes for The Wall Street Journal. He lives in Lon­don and often lectures in New York.

The historian and biographer Andrew Roberts was recently interviewed by the writer of A Blog on Winston Churchill about his monumental new book Churchill: Walking with Destiny. It easily ranks as the best one-volume biography of the British prime minister. I thank Andrew for making available the time to share his thoughts on Churchill.

1) Please describe the new documents and papers that became available since the last major Churchill biography that you used in researching and writing Churchill: Walking with Destiny.

Since the last fully comprehensive biography of him, there have been no fewer than 41 sets of papers that have been deposited at Churchill College, Cambridge of people who worked with Churchill, as well as those of his daughter, Mary Soames. The Queen has allowed me to be the first Churchill biographer to use her father King George VI’s diaries, which are very revealing about Churchill’s private thoughts during the darkest days of the Second World War. The Soviet ambassador Ivan Maisky’s diaries have also now been made available for the first time. I was also lucky to have discovered the verbatim accounts of the War Cabinet during Churchill’s premiership, which I have mined extensively for this book.

2) In addition to his other accomplishments, Churchill won a Nobel Prize in Literature. He had many ideas for writing projects that he never had the time to take on. What book do you wish Churchill had written?

I wished he had written his great life of Napoleon, which he planned to write in the 1930s. It would have been one of the great books of all time, as well as a great insight into Churchill himself.

3) Groundbreaking in your research has been the use of the diaries of King George VI. Please describe the relationship between Churchill and King George.

They needn’t have been friendly as Churchill had supported the King’s elder brother Edward VIII in the Abdication Crisis and the King had supported Chamberlain over Appeasement but they quickly got on very well indeed, even as quickly as the Battle of Britain. In fact the King referred to Churchill as his ‘friend’ and Churchill was the only one of his four Prime Ministers he called by his Christian name. Churchill trusted the King with all the most important secrets of the War.

4) You previously wrote Napoleon: the Great and now Churchill: Walking with Destiny. Please compare the two leaders. Which was the more interesting or complicated personality?

5) Churchill is a towering figure whose life might be even beyond a 982 page book such as Churchill: Walking with Destiny. If you had had more space, what would you have liked to include or go into more detail in the book?

This book could easily have been ten times longer. I had to discard scores of thousands of words to keep it down to 982 pages. If I’d more space I’d have concentrated more on his time in the trenches and as Minister of Munitions in WW1, but theres only a certain amount one can expect of one’s readers.

6) What qualities made Churchill such an effective leader, especially during wartime?

His historian’s view of British history allowed him to see the strategic predicament of 1940-41 in terms of earlier crises, such as the Spanish Armada, Louis XIV’s wars (which had been won by his great ancestor, the Duke of Marlborough), the Napoleonic Wars and the First World War, and enabled him to explain this to the British people how they would prevail. The thousands of speeches he had delivered in the four decades of his public life before 1940 also stood him in excellent stead, and I analyze his oratorical techniques in depth.

7) What do we know about his personality and character, both in the public eye and behind closed doors?

His personality behind closed doors was remarkably close to the one in public; he wore his emotions on his sleeve. Unlike many politicians, there were not two Winston Churchills: the public and the private. The British people sensed this genuineness of character, and, albeit late in his political life, responded to it warmly. His lack of guile meant that he was not good at the kind of political intrigue that his contemporaries excelled, often to his great disadvantage.

8) What would you class as Churchill’s biggest strengths and weaknesses?

His greatest strengths were his moral and physical courage. A few people have one or the other, but only a very few have both. His weaknesses were many: he was no good at economics; he trusted people even after they had let him down more than once; he used his charisma and forceful character to impose bad policies on occasion, and he thought in terms of national and racial stereotypes that often proved to be totally false, as when he thought the Turks in the Great War and Japanese in the Second World War would not make good soldiers. Overall, however, his faults were feathers in the balance besides the iron of his strengths.