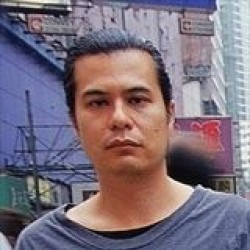 Karl Taro Greenfeld is the author of seven previous books, including the novel Triburbia and the acclaimed memoir Boy Alone. His award-winning writing has appeared in Harper's Magazine, The Atlantic, The Paris Review, Best American Short Stories 2009 and 2013, and The PEN/O. Henry Prize Stories 2012.

Born in Kobe, Japan, he has lived in Paris, Hong Kong, and Tokyo, and currently lives in Pacific Palisades, California, with his wife, Silka, and their daughters, Esmee and Lola.

Most women agree that rearing a child is one of life’s most challenging, yet gratifying jobs. Fortunately, we have created various moms’ groups and social circles for developmental as well as personal advice to get us through the not so easy times. Have you ever wondered what it must be like for dads?  In this day and age, many dads are taking as active a role as moms in carpool drop offs, school parent nights, and extra-curricular activities.

This month’s Jen’s Jewels Karl Taro Greenfeld tackles this very topic in his latest release TRIBURBIA. Centered on the lives of a group of eclectic men in Tribeca, NYC, this book addresses the unique way in which men view parenting and marital issues. With a distinct format and a brutally honest spin on reality as we see it today, this novel is a must read for moms and dads alike.

As part of this interview, Harper, an imprint of Harper Collins, has generously donated five copies for you, my favorite readers, to try to win.  So don’t forget to look for the trivia question at the end. Thanks for making Jen’s Jewels a part of your reading adventure.

Jen: As an author and writer, you have an impressive list of journalistic endeavors. So that my readers may catch a glimpse into the life of the man behind the words, please share with us your educational and professional background.

Karl: I was born in Kobe, Japan, grew up in New York and Los Angeles and have lived in Paris, Tokyo, Hong Kong, Los Angeles and back in New York, where we are now living in Tribeca. I went to Palisades High School in Pacific Palisades and then Sarah Lawrence College in Bronxville, New York and finally graduate school at Columbia, where I got a masters in journalism through the Knight-Bagehot Fellowship. After finishing Sarah Lawrence, I got my first job at a newspaper in Tokyo, working as a reporter at the Asahi Evening News, an English language daily that was associated with the Asahi Shimbun, one of Japan's largest newspapers. I went from there to editing a monthly city magazine and then writing for American and British magazines like Details, Vogue, The Nation, The New York Times Magazine, The Face, Arena, Wired, and that magazine writing led to my first book, Speed Tribes.

I came back to the US, went to Columbia, then got a job at TIME as a writer, after a while they sent me to Hong Kong where I was editor of TIME Asia. I kept writing books, eventually writing three about Asia, and then my memoir Boy Alone, about my autistic younger brother Noah. I was a writer and editor at Sports Illustrated where I launched Sports Illustrated China, and then I went to Conde Nast Portfolio, which folded and now I'm a contributing editor at Bloomberg Businessweek. I began writing fiction about five years ago, while I was still at Sports Illustrated, sending my stories to small magazines and literary journals. I got lucky and published a few stories in The Paris Review, and then some more in other places and now I've finally published a novel, TRIBURBIA.

Jen: Please describe for us your “Aha!” moment when you decided to pursue a career as a writer.

Karl: I've wanted to be a writer ever since the fireman/astronaut phase of aspiration, around age six.

Jen: My readers may recognize your name as the author of BOY ALONE: A Brother’s Memoir, depicting your personal struggles of growing up with an autistic brother. Why did you choose to bring those very personal family experiences to life once again? And, what was the most rewarding part of writing the memoir?

Karl: It was a difficult book to write for several reasons. Firstly, my father had written several books about our family, including A Child Called Noah, and so I had a hard time figuring out which were my memories and which were my own. It was also a very difficult book to structure, because I played a complicated, and some said cruel, trick on readers by only revealing at the end of the book what was real and what was fictional. But I also felt it was important to tell Noah's story, and my own, because there is too little written about low-functioning, adult autistics. Most autism memoirs are about how a miracle happens and there is a breakthrough and the child begins to speak. Well, Noah's story is very different, and I think family members of low-functioning autistics need to know they are not alone.

Jen: Your latest project TRIBURBIA: A Novel is a dark spin on modern day suburbia life told through a group of eclectic fathers living in Tribeca. Honestly, I have never read anything like it. What a fascinating read! Bravo! How did you arrive at the premise?

Karl: I've always written about where I live, and so writing about Tribeca came very naturally to me.

Jen: In terms of nuts and bolts, approximately how long did it take for you to complete the book? And, what was the most challenging part of writing a novel compared to a memoir?

Karl: In many ways, writing a novel is much easier because you don't have to do much reporting or research because there is no burden of accuracy. But it was more challenging because, unlike my non-fiction books, there was not editor waiting for the book and I hadn't received an advance or made any deal with a publisher. Like most first time novelists, I was writing this and hoping it would get published.

Jen: The format of each chapter centers on street addresses in Tribeca. Why did you choose to tell the story in this distinct way? How did you go about choosing the locations? Are they purely fictional?

Karl: They are fictional. I was looking for a linking device and thought the map and addresses would work.

Jen: The six main characters in the book each have unique personal circumstances paired with enviable positions… a sound engineer, a sculptor, a film producer, a chef, a memoirist, and a gangster. Which character was the most difficult to develop and why?

Karl: They all worked in the confines of their stories or this novel. I didn't have to develop them into individual novel-length characters so I don't know how that would have worked.

Jen: Within the storyline, your characters address common parenting issues such as disciplining a child and bullying in school. How does this set of dads approach these major issues differently than say your typical suburban mother/father?

Karl: I think one of the themes of the book is how this very urban enclave is actually totally suburban in character—hence, TRIBURBIA—and so the way these families deal with child-rearing issues is very suburban.

Jen: After the completion of this project, what impact, if any, did writing this book have on your own views of fatherhood and marriage?

Karl: It is more reflective of my views of fatherhood and marriage, though not necessarily my views of the ideal marriage or the kind of father I would LIKE to be. We are all flawed, and only by admitting that and understanding it a little can we maybe make some art out of our own defects and flaws.

Jen: Let’s switch gears now and talk about your promotional plans. First, please take us on a tour of your website highlighting points of interest.

Karl: Karltarogreenfeld.com. My wife designed my website, and it is still a work in progress. It is intended to do two things: promote my books and serve as a set of clippings, so that editors who aren't familiar with my work can get a sense of it.

Jen: Do you participate in social media? And, what is the best way to keep abreast of news and upcoming releases?

Jen: Are you currently at work on your next novel? If so, what may you share with us?

Karl: I'm working on my next novel. It has a big chunk which is sort of like Grapes of Wrath, only set in foreclosure America, and it has another chunk which is about a father struggling with a teenage son and another chunk about the wife of a convicted Ponzi scheme runner and so forth. I don't know if it will work.

Jen: Thank you so much for sharing your time and talents with my readers. Best of luck with your book tour! TRIBURBIA is an extraordinary read. Congratulations!

I hope you have enjoyed my interview with Karl. Please stop by your local library branch or on-line retailer and pick up a copy today! Better yet, how would you like to win one instead?

Okay, be one of the first five readers to e-mail me at jensjewels@gmail.com with the correct answer to the following trivia question and you’ll win!

Name a profession of one of the main characters in the book.

Next time, I will be bringing to you my interview with Susan Elia MacNeal, author of PRINCESS ELIZABETH’S SPY. You won’t want to miss it.