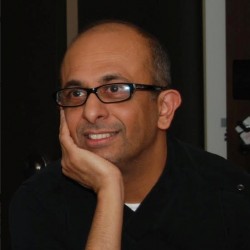 orn and bred in idyllic Bangalore, Jayant lives in scenic Seattle. He holds an MBA from The Indian Institute of Management-Bangalore and has donned different professional hats over the past twenty years -- Corporate Trainer, Management Consultant, Technology Manager, Financial Planner, and Faculty at Business Schools. An avid reader since childhood, Jayant was always enamoured by the power of the written word and the intricacies of the English language.

While he had several stories going on in his head and penned some of them partially on paper, the real impetus to heed his calling and practice his passion came in the form of Vikram Seth s A Suitable Boy, which he happened to read while immigrating to the US. That is how Colours in the Spectrum was born. Thereafter, Jayant completed the Certificate Program in Literary Fiction at the University of Washington. Jayant has compiled and edited two non-fiction publications -- anthologies of true incidents from the life of a gifted humanitarian, ever since.

An inveterate film fan, he has written the script for a full-length feature film and is optimistic of finding serious takers. He has also begun work on his next novel, tentatively titled Family Secrets. In his free time, Jayant volunteers with several professional organizations in the Seattle area. He is a member of the Board of Directors of IIM Americas -- an alumni association of premier B-schools. His wife Vidhya is a Human Resources professional and a dilettante marathon runner.

The Lifestyle Portal is proud to be associated with Washington-based first-time author Jayant Swamy for the launch of his book – ‘Colours in the Spectrum’.

Alumni of The Indian Institute of Management ’92 batch, Jayant shares with our readers about his growing up years in the Garden City of Bangalore, to his move to the US and his ever growing love for reading and writing. With years of trials and patience that has finally paid off, he’s got his first book published and is now working on the second.

A true inspiration for many who’ve been wanting to take up writing a book only to realise what a trying phase it can be. It’s his dedication towards his craft over and sheer perseverance over the years that have finally paid off and we at The Lifestyle Portal are here to share his journey of becoming a writer.

You can pick up a copy of his latest book ‘Colours in the Spectrum’ from Flipkart and Amazon.com.

1) You don many hats that of a – ‘Corporate Trainer, Management Consultant, Technology Manager, Financial Planner, and Faculty at Business Schools’ – tell us a little more about yourself and your transition to being a writer.

While management is my core competence and I continue to do that in a corporate day job, writing is my passion. I had written a long story, back in the 80’s, sent it out to popular magazines in India for publication and experienced my first series of rejection. All through the 90’s, writing was a random affliction I sporadically indulged in, and the few contributions I made to guest columns and ‘Letters to the Editor’ sections were promptly published!

Inspiration to take writing seriously finally struck me when I happened to read Vikram Seth’s magnum opus, A Suitable Boy. Having immigrated to the US around the same time, I made use of ready resources available here – attending free writing workshops at the local libraries and enrolling in the literary certification program at the University Of Washington, Seattle. There was no looking back after that. The random affliction had transformed into a practising passion!

2) You went on to pursue a course in Certificate Program in Literary Fiction at the University of Washington. Please tell us a little more about your experience and journey to being a writer.

While love for the English language, a flair for words and a head that constantly buzzes with stories are necessary but not always sufficient for becoming a published author. The craft requires some honing. Apart from introducing me to the basics of plot arcs and emotional arcs, the program inculcated in me a sense of discipline to write regularly. It also helped me lose my inhibitions and forget any apprehensions – as week after week – we the participants reviewed and analysed each other’s stories. The ‘long’ short stories I developed during this time formed the genesis of an entire novel.

3) What inspired you to write ‘Colours in the Spectrum’? How did it all begin?

Amongst the several stories that buzzed in my head, one was recurrent. It was about five friends who go their separate ways and then reunite to find that nothing is the same anymore. Once I embarked on the path of penmanship, the characters took over and the stories unravelled themselves.

4) What are the challenges that you faced in writing Colours in the Spectrum and how did you overcome them?

Mainly my tendency to procrastinate and, of course, a paucity of time since I was an integral part of the corporate world. Ultimately, my determination to pursue my passion transcended these challenges and Colours in the Spectrum was born. Around the same time, I joined IBM as a Management Consultant. While there was no escaping the road-warrior lifestyle, I was also presented with an opportunity. At the airports, in the hotel rooms, on the flights – is how I completed the first draft of my novel.

My biggest challenge was yet to come. While it took me five years to write the book, get it reviewed by early readers and refine it, it took me another five years to find a publisher. Traditional mail and email, I sent my queries and manuscript extracts, to agents and publishers, in the US and India and even some in the UK. I attended writing conferences and pitched my novel there. Rejection – both silent and stated – was almost a way of life during that time. Patience and perseverance were my only allies, until Leadstart Publishing India offered to publish my book.

Born and bred in Bangalore, I lived there for over three decades and a half, before I moved to the US and settled in Seattle. The book in many ways is an ode to Bangalore – I hold the city very dear to my heart. During the 70’s, life in Bangalore was idyllic and lethargic. When liberalisation happened in the 90’s, Bangalore was one of the first cities to globalise. When I moved to Seattle in the late 90’s I found the transition almost seamless because Bangalore was by then such a happening place. The time zones and the city were not even a choice, by default, they offered the perfect background for the story I was about to tell.

6) There are very interesting characters in your story – Karan, Arjun, Aarti, Indu, Danny and Lila – what made you craft each individual character in such a way?

I am a born teacher. Training is my other passion. I dabble in personal development and soft skills training. The intricacies of human behaviour and the underlying psychology have always fascinated me. I am a firm proponent of Maslow’s theory of self-actualization. Effective story-telling is all about tracing the emotional trajectory of the lead characters as they make their way through conflicts and complications and depicting how they are changed.

7) Is there a hint of personal touch in your book? Any personal influence(s)/ experiences that made you write such a story?

The characters and their stories are pure fiction. A vivid imagination is one of my strong points. I was an avid reader of Enid Blyton in my childhood days and the 70’s portions may have some influence on her writing style. Readers have commented that parts of the book are in the same genre as Sidney Sheldon.

8) Who is your target audience for ‘Colours in the Spectrum’? What kind of readers do you think will be attracted to this kind of story/ genre?

My target audience is somewhat universal – primarily English-speaking adults in India, the UK and US. I have taken care to make the book appealing to Indian as well as western readers. At its very core, Colours in the Spectrum is a story of self-realization, along with the lines of Kite Runner. The universal elements of glamour and action, romance and sex are used to make this soul-searching exciting to the readers. Colours in the Spectrum portrays the urban side of India, giving the western readers a somewhat different perspective than the familiar one of tigers and maharajahs, snake charmers and elephants, poverty and slums.

9) What is the USP of this book? What makes this book so unique?

Dysfunction is normal. Individual choice is powerful. Within the universal framework of love, the book gives readers an alternate perspective on several aspects of life that may not necessarily follow social norms.

10) You’re currently working on your second book ‘Family Secrets’ – could you let us a little peek into what the book is about?

Spanning four generations, Family Secrets is a tale of blood ties and anonymity, deceit and loyalty, ambition and justice. It is the story of two warring half-brothers – the domineering Abhimanyu on whom luck never stops smiling, and the embittered Siddharth, destiny’s own stepchild. It is the story of the powerful matriarch Rani Maa, the lineal descendant of a royal family, who as a young widow entangles herself in a forbidden romance and paves the way to fulfil her dreams. It is the story of Rahul, a teenager in the throes of asserting his sexuality, torn between the love for his adopted father and the magnetic bond he feels for his biological father. Family Secrets is the story of Abhi, born to redeem the injustices meted out by Abhimanyu to his own blood.