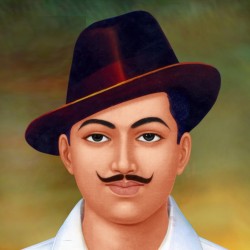 Bhagat Singh was an Indian socialist considered to be one of the most influential revolutionaries of the Indian independence movement.

He is often referred to as "Shaheed Bhagat Singh", the word "Shaheed" meaning "martyr" in a number of South Asian and Middle Eastern languages.

Born into a Sikh family which had earlier been involved in revolutionary activities against the British Raj, as a teenager Singh studied European revolutionary movements and was attracted to anarchist and Marxist ideologies.

AN INTERVIEW WITH BHAGAT SINGH

I know what I am writing is whole fiction as it is the rule of the nature that dead people cannot be brought back to life. But sometimes I wonder what if India’s greatest freedom fighter “Shri Bhagat Singh Ji” would have been alive; what would have been thoughts on some of the burning issues of the nation.

I know there would have been thousands of questions in everyone’s mind but all of them could not be covered so I am sorry if your question is not in the following list. So let’s start this experience.

Question 1. Who inspired you to take up the freedom struggle at such an early age?

Answer: I was born in the family of revolutionaries. My uncle Ajit Singh was a revolutionary. He remained in jail for some years. Then he left for the United States to carry out the revolutionary movement from abroad. I saw my aunt crying in front of my uncle not to leave but he did not pay any attention to her tears and started packing up his stuff.

I asked my uncle if it was important for him to leave to which he replied that our motherland was in the control of the Britishers and it was the duty of every individual Indian to contribute for the Indian struggle and he was just fulfilling his duty and would return as soon as his motherland was free from the rule of the Britishers. This one incident turned the face of my life. The cruelty of the Britishers was at its peak and they did not considered Indians as human beings; but as their slaves. I was just unable to tolerate all this and decided that the Britishers should be thrown out of our homeland either by hook or crook.

So, all these factors inspired me to fight against the Britishers. But the most important incident was that of Jalliawalah Bagh where the British officials decided to fire on unarmed Indians who had just gathered there for the annual Baisakhi Mela.

I considered all the Indians as my family members and when the Britishers decided to open fire on my family members; from that day only I decided that the only way the Britishers could be thrown out of our country is by forcing them to do so through an armed revolution. We decided that we would not kill the innocent people but those guilty needs to be punished. That is what we did by killing the killer of our Guru Shri Lala Lajpat Rai Ji.

Question 2. Some people think that you are atheist so did you believed in God or not?

Answer: I believe in God but still I am atheist. According to the Indian mentality if a person do not go to the religious places of worship regularly or does not read the Holy Scriptures regularly then he is considered as an atheist. So, according to this criterion I am an atheist.

Question 3. What are your views about Mahatma Gandhi?

Answer: Mahatma Gandhi was a greatest freedom fighter the world has ever witnessed. I respect him a lot for his courage, determination and strength by which he tackled the British rule. He was a champion of champions and inspired many including myself to join the freedom struggle.

But some of his methods and tactics I personally did not liked. For example what was the need of calling off the non cooperation movement when it was at its’ full peak. The incident of Chauri- Chaura was not so big so there was no need for calling off the movement which was receiving a great response. From that day onwards I had differences from Gandhi Ji.

Question 4. There is a huge increase in the cases of rape and molestations in our country. According to you how can we stop this problem?

Answer: Well, according to me no government or no police force can stop the rape cases. The government and the police can only be present at the public places but what about those cases in which the incidents take place inside the homes or any other places where the police force cannot be deployed.

It has been found out that more than 80 percent of the rape cases involve those people who know the victim personally. These cases cannot be stopped by the government, whether agreed or not.

The only way by which these cases can be solved is by giving proper moral education to the children at the school level. I am sometimes quite shocked that the children of our country are so much burdened by the pressure of studies at such a small age. Parents spend a huge amount of money on sending their children to various useless classes but don’t spend even half an hour talking to their child.

Parents and teachers play a very important role in shaping the mind of the child but now a days they are just shaping it with the algebraic equations and all other stuff which is of no use for the child. If proper moral education is given to the child then most of the rape cases would not take place

The second problem lies in our judicial process. The judicial process should be fast so that the trial can be completed in a specific time and the guilty is punished. This can act as a deterrent for the rape cases. Another problem is that of the juvenile system.

A juvenile who can rape someone should be treated at par with that of the adult convicts. A boy of sixteen or seventeen is mature enough to know the difference between what is right for him and what is wrong. So please it is my request to please change the juvenile system.

Question 5. What are your views on the statements given by our political leaders regarding Muslims of our country? And if it was in our hand would you have allowed the partition of this country?

Answer: I can easily say that Indian Muslims love their country as much as people of other religions do. The statements given by our political leaders are quite dangerous for our society. These statements are acting as a poison and creating a huge divide between the people.

Ashfaq died for the freedom of this country. He was also a Muslim and wanted to see his country free. I know that some bad elements are always present in the society who tries to flare up the tension. The best thing that the public should do is just to ignore them and don’t pay any heed to them.

If it was in my hand I would never have allowed the partition. It was a result of the dirty policy of the British Government and leaders of both the Congress and the Muslim League were hungry for power. And as they say leaders take the wrong decisions and the sufferer is the common man. And they suffered in the worst possible manner.

Question 6. What is India of your dreams?

Answer: India of my dream would be that one where there is no difference between the rich and the poor. Where no criminal or ones with the tainted record would not be send to the parliament. Where every individual would start thinking of the country first before thinking of himself and his family. Where the farmer and the army people get their due rewards on time. Where no one will sleep empty stomach and every individual will get sufficient food to eat. Where people of all castes and religions stay together in the same locality and our political leaders treat them with equal respect.

Where political leaders would not consider people just as mere vote banks and work for the betterment of the country. Where there will be no corruption and every person will pay the right amount of taxes which is due on him. That will be India of my dreams.

Question 7. This is the last question for the day you haven’t received the Bharat Ratna yet, do you feel bad about it?

Answer: I want to remain in the hearts of the people. I want to inspire the youth of this country to think about your country before thinking about yourself and your family. If I am able to do that to even one of the individuals then that is more than getting five Bharat Ratnas’ for me.

Suddenly my mom wakes me up,”Bete uth jao; college nahin jana apne”. So, it was just a dream but that dream inspired me to write this blog and share this blog with you on the great man’s birthday today. Hope you like it.