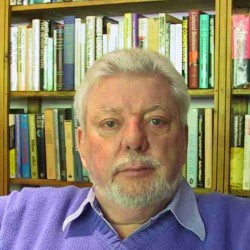 Gordon Thomas is a political and investigative journalist and the author of 53 books, published in more than 30 countries and in dozens of languages. The total sales of his works exceed 45 million copies.

Thomas' most recent bestseller is Gideon's Spies: Mossad's Secret Warriors. Published in 16 languages and 40 countries Gideon's Spies is known throughout the world as the leading resource on Israeli intelligence. An updated edition will be published in 2012 by St. Martin's Press.