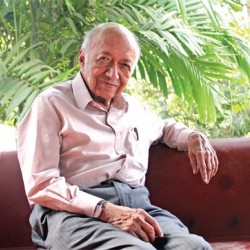 Victor Rangel-Ribeiro, the award-winning author whose debut novel, Tivoli, was named one of the twenty notable first novels to be published in America in 1998, was born in Goa, India, in 1925, then a Portuguese colony.

First published in Bombay, his short stories have since been featured in three top American literary magazines---the North American, Iowa, and Literary Reviews. Other pieces appeared in The Indian-American.

HarperCollins, India, published his short fiction, Loving Ayesha and Other Stories, in 2003, with illustrations by the celebrated Mario Miranda; it promptly made the bestseller lists in that country.

He loves to share his knowledge of writing techniques with aspiring authors and his workshops in Goa and Bombay are invariably oversubscribed.

In June 2002, he was invited by the University of Mauritius and a Mauritian presidential commission to conduct a weeklong writing workshop in that distant island republic.

He has conducted workshops two workshops at the South-Western Writers’ Association Conference in Tucson, Arizona.

In 2003, Sewanee University in Tennessee assigned Tivoli as required reading for a course in international literature, along with works by Salman Rushdie, Arundhati Roy, and Chinua Achebe.

Tivoli has been studied at Yale University, and is currently part of the MA curriculum at Goa University. Until 2011 he was on the International Online Creative Writing Faculty of Fairleigh Dickinson University’s MFA program in Madison, New Jersey.

He speaks Konkani fluently, and reads both the Rome and the Devanagari script. He also speaks Hindustani and various European languages, and can be easily misunderstood in all of them.

Victor Rangel-Ribeiro, born in Goa, India in 1925 when it was still a Portuguese colony, is the author of Tivolem, published by Milkweed Editions in 1999. The novel was awarded the Milkweed National Fiction Prize, and Booklist, the influential journal of the American Library Association, named Tivolem as “one of the twenty notable first novels” of 1997-98.

Based on his childhood memories, Tivolem originally took shape in the form of a series of short stories. Rangel-Ribeiro has a forthcoming collection of short stories Loving Ayesha and Other Tales from Near and Far, scheduled for publication in the spring of 2002. Rangel-Ribeiro came to the United States in 1956 after earning a B.A. from Bombay University, graduating from St.

Xavier’s College with Honors in English Language and Literature, and then working in editorial positions with several newspapers, including the Indian Express, Bombay, The Times of India, and Illustrated Weekly of India. He was also the first Indian to break through the racial barrier and become copy chief at J. Walter Thompson, a position previously held exclusively by Englishmen.

An accomplished writer, Rangel-Ribeiro has published nonfiction books, including two about music, and has also had several short stories appear in literary journals. Over the years, he has covered music concerts and opera for the New York Times and for 10 years, ran a specialized music shop in New York City.

Rangel-Ribeiro, who earned an M.A. at Teachers College at Columbia University, is  a member of the American Mensa Society and is one of the co-founders of the Goon Association in New York, and has also served as Music Director of the Beethoven Society of New York, as well as serving as the coordinator of the largest adult literacy site in New York City.

Rangel-Ribeiro has resided in Queens, N.Y. for the past 44 years with his wife, Lea. They have a son and a daughter, and five grandchildren, and, as Rangel-Ribeiro adds, even that could change. Derek Alger: Since you published your first novel, Tivoli, at the age of 72, I think you serve as an inspiration to a lot of writers. Were you always aware that this novel was inside you, waiting to get out?

Victor Rangel-Ribeiro: I do not believe that this particular novel was waiting to get out, but I did get the feeling back in 1953, that a quite different novel was waiting to get out — it dealt with a traumatic experience I had just gone through, of having a fine newspaper I had helped launch just shut down overnight, throwing hundreds of people, myself included, out of work.

DA: Tivolem evolved out of a short story. VRR: Indeed it did. The story dealt with a village rapscallion who graduates to being a petty thief, and is alternately accepted and toughed up by his fellow villagers. Soon after the story appeared in the Iowa Review I found strange invisible beings were intruding in my life.

DA: Can you elaborate?

VRR: While sitting squeezed in between two people on the New York City subway, for example, I’d find yet another person squeezing in next to me, and this person would whisper in my ear, “Past! You’ve written about the thief in our village, but why haven’t you written about me?” And when I asked, “Who on earth are you?” the voice said, “I’m Dona Esmeralda, the grand dame of the village. Shame on you. How could you not know that?”

DA: What happened next?

VRR: I looked more closely, and the invisible person was indeed Dona Esmeralda Grace de Menezes. How on earth could I not have known that? It was most embarrassing. Next day I was in the shower when another invisible person drew the curtain aside and stepped in. “Who the devil are you?” I cried. “Watch your language!” a mellifluous voice said.

“Pax vobiscum! If you went to church more often, you’d know I’m the vicar of Tivolem. You’ve written about the thief, you should write about me, too, just to restore the balance in favor of virtue.” And as the new characters presented themselves, so the novel grew, and grew.

DA: The two main characters in Tivolem both return from abroad. Were you conscious of this crossing back and forth of the river of culture, so to speak?

VRR: Not in those terms, no. But in Goa people come and go, and it has more to do with the economy than any differences in culture.

DA: The characters in the village of Tivolem gather around a lone shortwave radio for news from Europe and even India. It’s an interesting image; what did it mean for you?

VRR: Though Tivolem is set in the year 1933, the shortwave radio in my native village became especially important in 1939, when we would listen anxiously to news from London about the beginning of World War II.

DA: I’ve heard you say that you can be misunderstood in eight languages.

VRR: India, with its multiplicity of languages, is much like Europe in this respect — just being born there makes you multilingual.

Having been born in Goa, I grew up trilingual: Konkani, Portuguese (because Goa was then a Portuguese colony) and English (because my parents were cultured and belonged to a certain strata of society) were all my mother tongues.

When we migrated to Bombay, I added Hindustani (which is a bazaar version of Hindi), and a smattering of Hindi itself.

DA: And the others?

VRR: In college, since I had no professor to help me continue my Portuguese studies, I took Spanish as a second language; my interest in singing (light, reedy tenor, no range to speak of, but big pretensions) led naturally to Italian; my knowledge of Portuguese, Spanish, and Italian then made French accessible as a written language, at least.

In 1953 I spent nine months in Calcutta trying to get an edition of The Times of India off the ground, and learnt some Bengali, that I have now forgotten. I also taught myself German. As a youth I disliked being idle. In college, particularly, I was very active. I played cricket, soccer, hockey, field hockey, that is, since there is not much ice in Bombay! I ran five miles a day.

I wanted to run in the intercollegiate mile. Most days I also bicycled out fifteen miles each way to see my sweetheart, who lived in a suburb. I was full of pep. One day I wasn’t feeling well and the doctor said I had to stay in bed 14 days. Fourteen days! For a mild fever? I thought the man was crazy. “Why fourteen days?” I asked him.

“You have German Measles,” he said. So I thought I’d put those fourteen days to good use and asked my brother to pick me up a book I’d seen, called Teach Yourself German. I can now read Heinrich Heine and Erich Maria Remarque in the original, but much of Goethe, alas, is beyond me.

DA: Aside from sports and the German Measles, what memories do you have of college?

VRR: I was in college from 1941 to 1945. I have memories of wonderful professors who inspired me, including a Spanish Jesuit, a renowned historian, who was blind with cataracts.

I also have memories of two bittersweet romances with two sisters, both of whom decided to become nuns. Cause and effect? I was quite desolate, until years later I met Lea.

DA: What sort of influence did the Jesuit professor have on you?

VRR: He left me with a lifelong involvement with Indian history. It paid off in a strange way. After the Times of India debacle in Calcutta in 1953, I was back in Bombay, and got an irresistible urge to go to the old college.

I walked into the old Jesuit’s office and he said, “Victor, an angel sent you.” He turned over to me part of the secret archives of the East India Company, from 1796 to 1803, that one of his professors was supposed to have worked on, a stack on his desk eight or nine inches high.

VRR: “The work has to be completed in three months,” he said. “Can you do it?” I was under 30, unemployed, and stupid, so I said yes. And I did it. The volume has since been published by the National Archives, in Delhi. Naturally, my name is nowhere to be seen.

DA: Are you aware of yourself as being of a particular culture, or more of an international man?

VRR: Only my innate modesty prevents me from describing myself in those grandiose terms . . .

DA: Music is an international language.

VRR: So it is, and I should have added it to the mix, since I “speak” music, too. Yehudi Menuhin, on one of his visits to India, told us that in the villages he played unaccompanied Bach (the famous Chaconne, for instance)

for audiences that had gathered in the shade of the largest tree to hear him, and they were always receptive to this unfamiliar music, shaking and bobbing their heads appreciatively whenever he came to a cadence.