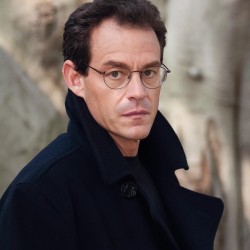 Daniel Silva was born in Michigan in 1960 and raised in California where he received his BA from Fresno State. Silva began his writing career as a journalist for United Press International (UPI), traveling in the Middle East and covering the Iran-Iraq war, terrorism and political conflicts.

From UPI he moved to CNN, where he eventually became executive producer of its Washington-based public policy programming. In 1994 he began work on his first novel, The Unlikely Spy, a surprise best seller that won critical acclaim.

He turned to writing full time in 1997 and all of his books have been New York Times/national best sellers, translated into 25 languages and published across Europe and the world. He lives in Washington, D.C.

An interview with Daniel Silva

Daniel Silva discusses his writing, why he is fascinated with the spy thriller genre, the research he undertook to write The English Assassin, and the inspiration for his lead character Gabriel Alon, who also appears in Silva's latest book The Confessor

How did you become interested in the subject of Switzerland's Nazi collaboration as a topic for a book?

I've always been interested in WWII in general, and I've read a lot of WWII history. The secret history of Switzerland during the war is mind blowing. It's such a fascinating and strange country – there really is this national preoccupation with secrecy at all levels.

And I've always been interested in art…. So the history of Nazi art looting, and of how all these paintings and other works of art made their way into Switzerland, was a natural. It's just something that I've always found engrossing, and at some point it became clear that it would make excellent material for a thriller.

You quote Jean Ziegler's The Swiss, the Gold, and the Dead at the beginning of this book. Was that book, which was about looted gold, not art, of course, in any way an inspiration for this one? Did you read any of the other books about Swiss banks and Nazi gold that came out around the same time?

I decided on this topic – looted art – first, and the Swiss connection came second. Yes, I think it was Nazi art first, Switzerland second.

But Ziegler's book was just such a lyrical and wonderfully scathing exposé, and I found it very illuminating. I thought it was tremendously courageous – he's Swiss himself, you know, and that kind of self examination is so frowned upon there.

I did read all those books that came out, that whole crop of titles; Hitler's Silent Partners is another that comes immediately to mind. But to actually answer your question, no, that book didn't really inspire the story of The English Assassin. It was very helpful and enlightening, though.

What other sorts of research went into writing The English Assassin?

I read a number of books on Nazi art looting, of which there are quite a few. I also read up on the Swiss banking system – just enough, really. This isn't a novel on Swiss banking, but I did have to learn enough about it to set a book in Zurich.

I also read a good deal of general Swiss history, and more WWII history. Then set it all aside and tried to write an interesting story that conveyed some of the ideas I had knocking around in my head.

Beyond the reading, I did quite a lot of site research. Grueling and demanding stuff, travelling all over Europe with my family….

What was the most shocking thing you discovered in your research?

Everyone had talked about the gold laundering; about how the Swiss turned the Nazi gold into hard currency.

But what I found most shocking, I think, and what I wrote about, was this idea that Swiss art dealers, and regular citizens, too – and not just Swiss I should say – capitalized on the extermination of a people in a way that is somehow unfathomable.

That someone's property was seized in Paris or Amsterdam, spirited away out from under them even as they themselves were shipped off to a death camp, and that there were people there to receive it and caress it and hang it on their walls….

You know, you can wrap your hands around the idea that Nazi Germany committed such horrific crimes against the Jews and others. It's this huge and terrible and inescapable fact of human history.

But somehow the idea that there were all these other people there to profit from it, people all over Europe and through all levels of society who weren't in any official way connected to Hitler's planned genocide – that is in a way even more inconceivable to me.

And I'll tell you; it's my belief that there's a lot of art that disappeared during the war that's still in Switzerland.

This is his second appearance of Gabriel Alon, after The Kill Artist – will there be more? What was the genesis of the character?

A bolt of lightning really. I had decided on the topic of the fourth book – targeted killings, as the Israeli's like to say.

One evening my wife and I happened to have dinner with a friend of ours who was an art restorer, and I said hold it: a spy, a killer, an art restorer… one half a destroyer, one half a healer. This is a great character. This guy has real internal conflict.

I created him for The Kill Artist and then just couldn't put him aside. He was a perfect fit for this book, clearly, with art being an essential element of the story. He'll be in the next book, too – I'm not done with Gabriel yet.

This novel has some major preoccupations: history, art, music. You already talked about history; are these other things personal preoccupations of yours as well?

Yes, very much so. It's a great thing to have to explore them so thoroughly for my work. Thankfully I can reach out and touch friends who know a lot more about these things than I do.

A woman named Sadie Dewfall was my music consultant for this book, for instance, and she helped me a lot in understanding the character Anna Rolfe, who is a world class violinist.

I play some music, but I'm not a real musician – to be able to hear what it feels like to make music like that, and also to get some insight into the weird personality quirks that go along with that kind of genius, was such a pleasure, and so indispensable.

I like telling stories, thrillers that don't necessarily have traditional thriller-esque characters. You have the assassin here, of course, and the spy; but you also have an art restorer and an art dealer and a musician – it's fun this way. Fun for me, and hopefully for the reader.

Has the rise in the global visibility of terrorism become material for you? Has any of what's been happening in Afghanistan and the Middle East changed your perspective on your writing or informed it in any way?

Not really, I'd have to say. I had one book on that subject I wanted to write, that dealt tangentially with a Bin Laden-like character, who plots to assassinate the president. It slipped way down on my list as something I'm interested in doing.

Writing about that in a fictitious sense is not really something I want to do. I'm deeply upset by what happened, and it wouldn't be fun for me to write about it, and I don't think it would necessarily be so fun to read about it, either.

The idea behind my books is to escape, and to write now about that sort of thing would not be escapism. I have plenty of ideas; plenty of topics lined up that I want to write about, I think I can leave terrorism alone.

This story has a lot to do with redemption and retribution. Would you say these are important themes in your writing in general? What else might be?

Not so much in my writing in general, but very much so in this book. This one could almost be titled the Day of Atonement or something like that. Redemption, retribution, forgiveness – these things make up the spine of the novel, and everything in the story revolves around that.

I tried to make sure that all scenes play to these themes in some way. Something happened to Gabriel in the previous book that he has never been able to stop blaming himself for. At the end of this book, he's able to forgive himself.

So yes, these themes were something I thought about a lot during the writing of this book. On a personal level on a larger scale as well, with Switzerland as a whole. Some of the most damning stuff about Switzerland's war record has just come out recently –

that they let their railroad lines be used to export the Italian Jews, for instance. I think you can't start healing a wrong until you admit and accept a wrong. That was in part what this was all about.

You have a great facility for keeping a story moving. Was there any writer in particular that you feel you've learned the most from, as far as plotting and pacing go?

No not really. I think I'm influenced by a wide range of writers, but pacing is something I picked up more from working as a journalist.

I don't try to write in a fast pace, overheating ever scene, or to write tiny little sentences or use other devices to make the reader read faster. I'm not terribly verbose, and I write fairly carefully; but mainly I think it's that I have a strong internal clock about when something has gone on too long.

I'm not a writer that thinks every chapter has to be three pages long, though. Hitting the right pace is easy when you know the story you want to tell.

Did you like spy novels as a kid? Did you always want to be this kind of writer?

Probably I did, yeah. I did love thrillers and espionage. I grew up in a very small town in California, and as I look back on it now I can see that it was a pretty nice, enchanted kind of place to grow up.

But it was deeply boring to me. Thrillers were pure escapism for me as a kid. And they're still escapism for me now, though now I get to write them as well as read them. Lucky me!

Some of my favorite writers growing up were guys like Eric Ambler, Jack Higgins, and John le Care. The locales, the characters they had – it's really what I liked to read then and it's the kind of stuff I like to write now.