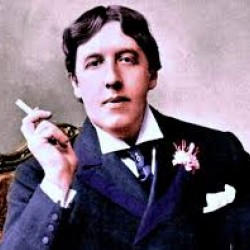 Oscar Fingal O'Flahertie Wills Wilde was an Irish playwright, poet, and author of numerous short stories, and one novel. Known for his biting wit, and a plentitude of aphorisms, he became one of the most successful playwrights of the late Victorian era in London, and one of the greatest celebrities of his day. Several of his plays continue to be widely performed, especially The Importance of Being Earnest.

As the result of a widely covered series of trials, Wilde suffered a dramatic downfall and was imprisoned for two years hard labour after being convicted of "gross indecency" with other men. After Wilde was released from prison he set sail for Dieppe by the night ferry. He never returned to Ireland or Britain, and died in poverty.

Special Dispatch to The Harvard Herald.

Immediately upon learning of the arrival of the lord of aesthetes, we had an appropriate costume made for our reporter by Mr. Frank Millet, and sent him to New York. Upon arriving at Mr. Wilde's hotel the reporter sent up his card, and an answer was brought that the poet desired some minutes to meditate upon the propriety of receiving an earthy visitor.

While waiting in the hotel parlor he was greatly discouraged by hearing a young lady say to a friend, "Ah, I'm so disappointed; he isn't a bit like Bunthorne."

After the reporter had waited about an hour, the valet returned and said that the poet was occupied with inspirations from the outer utterness, and could see no one. The reporter, without losing heart, again sent up his card, this time taking the precaution to write in one corner, "Of the inner brotherhood."

This had the desired effect, and he was soon ushered into the apartments of the lover of the beautiful. As he entered he was greeted by a "Ha! ha!" a strange sound that seemed like the smile of a tombstone. Seated before the fireplace he saw a tall, lean man of about twenty-six years. He wore a large Grosvenor of an ultramarine color, with a love of a sunflower embroidered on it; his morning coat was of purple corduroy, with the collar and cuffs adorned with pansies. In his hand he held a lily which ever and anon he would smell of, at which times a look of almost angelic serenity would o'er spread his countenance. At his side there stood a small table, with a dainty cup of tea and some cigarettes. Before seating himself our reporter wished to free his mind of a long existing burden, and innocently enough said, "Mr. Wilde -"

"I beg your indulgence, but please call me Oscar, 'tis not so earthy, but far more ecstatic."

"Well, Oscar, will you ease my aching soul and define aesthet -"

Before our reporter could finish, the "Idyllic" calmly rose, and with a voice calm enough to draw tears to the eye of a needle, said, "Lad, I did not thing that you came here to injure my sensitive feelings."

The reporter insisted that he had no such purpose, but as this was his first interview, and as all the other newspapers had asked the same question, he thought it was only the correct thing. This pacified the poet, and he said that AEstheticism is the cultivation of the AEsthetic, adding, "I trust this is clear."

Oh, perfectly, replied the reporter, as clear as the bursar's last report of Memorial.

At this remark Mr. Wilde's face assumed a look of weirdness, an expression of yearning after the infinite.

"By the way, Oscar, what do you think of America's institutions of learning as compared with those of other countries?"

"Ha! Ha! too fleshly, not sufficiently early English; but yet methinks it has been told that young men of Harvard are hopeful subjects, who may be etherealized and yet saved."

"Ah, yes," languidly responded the reporter, gradually falling into the spirit of the surrounding; "they too feel an indefinable longing for the indifferent, which the ephemeral mundanes would say is caused by indigestibility of the Memorial Carte de Jour.

"Ha! ha! yes, I grasp your conception, but then 'tis said that their aestheticism is purely pastoral."

"Yes, perhaps it is too Holme-ly."

Oscar must have heard of the great field, for at this remark his eyes gleamed with the fire of trembling delirium; his hair would certainly have stood on end, but the length refused this outrage to its gravity.

"Is it true, Oscar, that you helped to write 'Patience'?"

"Lad, 'tis but the story of my own life; as you see I am strangely beautiful, and 'tis pity for womankind alone that tempts me to wear this disfiguring garb."

"About your play" - but at this point the valet announced the presence in the parlor of some maidens who were just dying to see Oscar, and so, with many thanks for Oscar's kindness in talking to such a "mean, and commonplace thing," he took his leave.