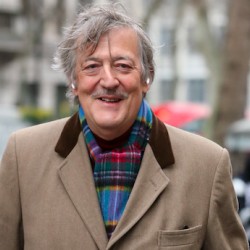 As one half of the Fry and Laurie double act with his comedy partner, Hugh Laurie, he has appeared in A Bit of Fry and Laurie and Jeeves and Wooster.

He is also famous for his roles in Blackadder and Wilde, and as the host of QI. In addition to writing for stage,

screen, television and radio he has contributed columns and articles for numerous newspapers and magazines, and has also written four successful novels and a series of memoirs. See also Mrs. Stephen Fry as a pseudonym of the author.