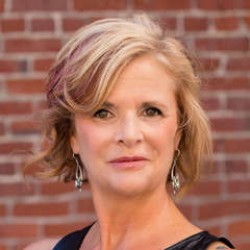 In addition to writing fantasy and paranormal romance, P. C. Cast is an experienced speaker and teacher.

Moon Chosen, the first book in her solo Tales of a New World Series, spent five months on the New York Times bestseller list. Kristin Cast has won awards for her poetry and journalism.

I’m an award winning, bestselling author of fantasy, paranormal romance, and young adult books.  I’ve also served a couple tours active duty in the USAF, as well as taught at the high school level for more than a decade.

I’m almost done with college!  I’m a communications major at the University of Tulsa, and I’ve been writing the young adult House of Night series with my mom since I was nineteen.

P.C & Kristin on The House of Night (tell us a bit about the series)

The House of Night is a vampire series that follows a group of teenagers as they are Marked by the vampire goddess, Nyx, and enter the world of fledglings where they will live at the House of Night until they complete the Change to adult vamp, or die!

By the end of the last book (Untamed) Zoey, the teenaged fledgling vampire protagonist seemed to have her hands full when powerful enemies are revealed – not to mention a whole host of relationship problems.  Can you give us a hint about what readers can expect to see Zoey face in Hunted?

P.C.: At the end of UNTAMED we see the fabric of Zoey’s world changing.  An ancient evil has been freed, Neverwet’s motives have been exposed, and there is a new kind of vampire introduced – and almost killed!  So Zoey has a lot to deal with from the opening pages of HUNTED.

K.C.: Mom always tells way more than I will about the next book, so all I’m saying is, “It’s worth the wait!”

How many books are planned for the series?

The series is really very open ended.  We have at least 9 books planned, with more to come as we follow Stevie Rae and the red vampires.  There is also a lovely illustrated companion book we have in the works right now, too!

With their mixture of teen drama, humor, horror and romance, books in the House of Night series make for addictive reading – and have reached beyond just their intended teenaged audience.  Did their wide popularity surprise you, or did you always believe they would be a big hit?

P.C.: I’ve been a little surprised!  I mean, I loved the Hone from the inception of the idea, but I just did with it what I’ve always done – I wrote the books I’d most want to read.  It’s shocking (and wonderful!) to see so many others loving them, too.

K.C.: Mom’s always surprised.  I’m not.  They’re awesome and I thought from the beginning people would love them!

Writing in a team – how does that work exactly?

P.C.: We’re working on book six right now, so we’ve got our system down.  We brainstorm, and then I write the first draft, leaving blanks for Kristin to fill in and even actually asking her questions within the manuscript.

Then I send all of that to Kristin and she goes through it, responding to my questions, filling in blanks, and asking me questions/making comments.

She sends it back to me, and I go through it again before I send it to our fabulous editor.  It sounds complicated, but it’s actually very freeing to know Kristin’s going to go through it after me and keep Zoey from sounding like “a forty-something year old disgruntled school teacher.” (Kristin’s words)

K.C.: Basically Mom does a bunch of work and then I get to go in and tell her she messed something up – it’s the only time in my life I get to tell her she’s wrong.  It’s fun!

What happens if you have strong differing views on a character or plotline?

Has writing together changed your mother/daughter relationship in anyway?

P.C.: People ask us this all the time and we always think it’s a funny question.  Kristin and I have been close for as long as she’s been alive, so working together just feels like a natural extension of an already strong relationship.

Our relationship has changed as she’s gone from child to young adult to adult (she just turned twenty-two) – we’re more friends now than a child/adult dynamic, but that’s as a result of her growing up rather than the two of us writing together.

K.C.: As Mom said, we’ve always been close, and I really don’t remember a time when she wasn’t writing, so it just seemed normal to write with her.

P.C  - with your previous solo works (the Goddess and Luna fantasy romance series) you obviously have a strong interest in fantasy and romance – what attracted you to writing for this genre?

P.C.: I like the endless possibilities of fantasy genre in general, so I’ve always been drawn to the paranormal.  I’m happiest when I’m writing a book I would honestly like to read, and when my lovely agent, Meredith Bernstein, said she had an idea for a series she’d like me to write set at a vampire finishing school I was reading an amazing YA series by Amelia Atwater-Rhodes (her HAWKSONG books), so I immediately thought of YA.

P.C – do you have plans to write more paranormal romance under your own name in the future?

P.C.: Of course!  GODDESS OF CAMELOT is my next Goddess Summoning Book, and it will be released in 2010 by Berkley.  I’m involved in the launch of a new Nocturne series for Harlequin called TIME RAIDERS.  The books are all written by ex-military authors, with a paranormal military theme. I have ideas for several other series, too…so many possibilities!

Kristin – would you like to write a novel on your own one day?

K.C.: I would!  I have a story written by myself in the YA vampire anthology, IMMORTAL, LOVE STORIES WITH BITE, published by Benelli Books exclusively for Borders.  I’d like to explore the world I created in that story, but I may have to finish college first…

With the House of Night series being optioned for film you must have spent time thinking about who you would like to see play the central characters….  Who would make up your dream cast for a movie version of your books?  Since this is a wish fulfilment question you can pick any actors alive or dead!

P.C.: Whenever I write Erik’s parts I see Tom Welling (Smallville’s Superman).  I heart me some Superman!

Which authors/books have had the most influence on your writing style?

P.C.:  I don’t think of other authors as influencing my style, but I am inspired by the creativity of other artists, such as: Anne McCaffrey, Robin McKinley, Ray Bradbury, Tanith Lee, Harper Lee…the list goes on and on.

K.C.: I love Richard Preston and Bram Stoker’s DRACULA has been my favorite novel for years.