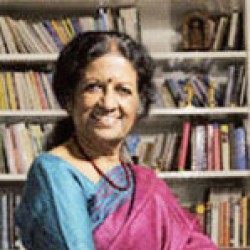 VAASANTHI is a leading writer, journalist and columnist in Tamil and English. She has published 30 novels, 6 collections of short stories, 4 volumes of journalistic articles and 4 travelogues in Tamil in the last 40 years. She was the Editor of the Tamil edition of India Today for 10 years. Her articles have appeared in leading Indian newspapers and magazines.

Her works have been translated in Malayalam, Hindi, Telugu, Kannada, English, Norwegian, Czech and Dutch. Two of her novels have been made into Malayalam films. She is the recipient of several awards in Tamil Nadu including the Best Short Story Writer award, Best Novel award for Ammani and Gnana Bharathi award. She has received the UP Sahitya Sansthan award and Punjab Sahitya Akademi award for her novels translated in Hindi and English respectively.

Now a freelance writer and journalist, she lives in Delhi.