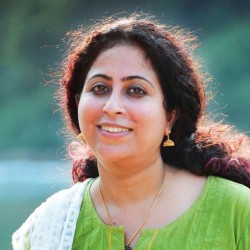 Anita Nair is the bestselling and critically acclaimed author of the novels The Better Man, Ladies Coupé, Mistress, Lessons in Forgetting, Idris:

Keeper of the Light and Alphabet Soup for Lovers. She has also authored a crime series featuring Inspector Gowda.

Anita Nair has also written two plays and the screenplay for the movie adaptation of her novel Lessons in Forgetting which was part of the Indian Panorama at IFFI 2012 and won the National Film Award in 2013.

Among other awards, she was also given the Central Sahitya Akademie award and the Crossword Prize. Her books have been translated into over thirty one languages around the world. She is also the founder of the creative writing and mentorship program Anita’s Attic.

ACCORDING to Anita Nair she hardly ever finds herself caught up in a situation, rather an impediment, called writer's block which decelerates a writer's thinking process. Perhaps that is the reason why she steadily spins captivating stories one after another in her mind, which are subsequently published in book form.

This is how it has been for Nair for quite a long time. Her career, spanning over 15 years, has witnessed either a novel, a collection of poems or short stories on a regular basis. And the latest treat for her fans is the novel, Lessons in Forgetting.

Born in Kerala, a state which boasts 100 per cent literacy, Nair spent her early years in Chennai. Her deep acquaintance and association with South India is depicted in her stories which are set in the region and richly flavored with the local elements. Nair's latest novel too is set mainly in Bangalore, where she now lives with her husband and son.

Her romance with writing blossomed in the 1990s when she worked at an advertising agency, weaving magic with words and ideas as a copywriter. She soon realised that her true calling was as an author and she emerged as one in 1997 with her first publication, a collection of short stories titled Satyr of the Subway.

'Writing is the one thing which gives me complete joy, total satisfaction; I am at peace and feel complete when I am writing,' she says, talking about the talent she always knew she had. Uptill now she has authored four novels besides other works.

Sounding firm and focused she talks in a soothing tone, undisturbed by the cacophony of noises in the mall where we sit, and describes how a writer needs to know the art of reinvention of stories that are present all around. 'Each story is retold in a certain way. One should be able to write or tell a story in a fashion in which it has never been told before.'

Besides, she believes writers need to absorb the world around them to bring it forth more beautifully. 'One should be able to gauge the world around; be grounded in everyday contemporary life. When you tune an instrument it has to be perfectly pitched, otherwise it sounds horrible.'

'I read extensively; it is difficult to name a few.' But still she thinks hard and names John Updike. She is acquainted with the writings of her counterparts from Pakistan and mentions Bansi Sudha and Mohsin Hamid along with a few others whom she has read.

She considers fiction to be her forte; however, she tries to spice up her imagination by some times shifting to non-fiction, children literature or humor. Although she is quick to admit that 'it is not easy to write humor.'

Counted among the prominent writers in the Indian literary circle, she has the honor of having her novels published in different languages. Her novel Ladies Coup was rated as one of the five best novels in India in 2001.

Another novel, Mistress, was a finalist in 2007 for the PEN/Beyond Margins Award in the US and, in the same year, was nominated as a finalist for the Liberatores (award) in Germany.

It is therefore surprising to learn she has been writing, remarkably well too, without having actually won a single award. 'I write because it gives me complete joy, I don't write with the motivation of winning prizes,' she asserts.

However, she adds, 'yes, if I win something it would be some kind of validation.'Ask where she sees herself in the next 20 years and she replies with a sparkle in her eyes, 'I will still be writing.'