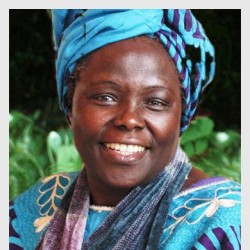 In 1984, she was awarded the Right Livelihood Award, and in 2004, she became the first African woman to receive the Nobel Peace Prize for “her contribution to sustainable development, democracy and peace.” Maathai was an elected member of Parliament and served as Assistant Minister for Environment and Natural Resources in the government of President Mwai Kibaki between January 2003 and November 2005.In June 2009, Maathai was named as one of PeaceByPeace.com's first peace heroes.Until her death, Maathai served on the Eminent Advisory Board of the Association of European Parliamentarians with Africa (AWEPA).Maathai died on 25 September 2011 in Nairobi while receiving ovarian cancer treatment. She was 71.Selected publications

Gender considerations have been at the heart of the work of the Green Belt Movement. Could you tell us a little about how gender fits within the GBM’s approach?

In the GBM, which is largely in Africa and more intensively in Kenya, we know that women produce and buy most of the food for their families and communities, which are very dependent on the land, soil, rivers, and forests for their livelihoods. When we started, we went to the women because they are the people who deal with these primary natural resources. For us it was almost a natural thing to reach out to the women and ask them to participate in the restoration and protection of those resources.

But what we saw over the course of the years was that it became necessary to work not only with the women but also with the broader community, with the men and the youth, because in the end dealing with the environment means dealing with the community. Within the Green Belt Movement, our focus continues to be protection, restoration and conservation, using women as the driving force—and they are really very good at it because that is what their livelihoods are about.

Are there instances when the gender cause can be pushed too far, pushed against certain cultural norms of societies to the point beyond a comfortable balance?

Well I think it is very important to move within the boundaries we can accommodate within our cultures, within our religions. While trying to minimize the aspects that hold women back, we also don’t want to put women on a platform where they will feel uncomfortable to compete. It is difficult for women to move ahead without alienating themselves from the society to which they want to belong. They still want to get married, to have families, to be perceived well by their communities. This is the case for women around the world I think. I haven’t come across a woman yet who thinks “Yes, I have arrived” in that sense. There are still a lot of challenges.

Gender advocacy has traditionally been left up to women. How can we get more men to take up the cause?

Well actually there are already a lot of men who support the cause of women at the parliamentary and local levels. In Kenya, for example, we just passed a new constitution that is extremely supportive of women and this was advocated for by many men, not only women. There are fewer and fewer men who would consciously oppose policies that support women.

Partly it is our own traditions, our poverty and attitudes, even our religion, that continue to hold women back. It is here that men play a much bigger role, because they are often the protectors and enforcers of traditions and religions. So we need to work on men, but we also need to work on ourselves, to change attitudes, continue to believe in ourselves and support each other, in order to make the kind of progress that is still needed.