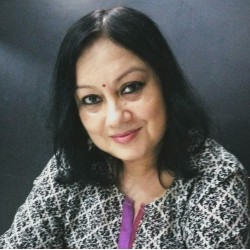 Mitra Phukan is an Indian author who writes in English. She is also a translator and columnist.[1]Her published literary works include four children's books, a biography, two novels, "The Collector's Wife" and

"A Monsoon of Music" (Penguin-Zubin) several volumes of translations of other novels and a collection of fifty of her columns, "Guwahati Gaze" Her most recent works are a collection of her own short stories

"A Full Night's Thievery" (Speaking Tiger 2016) and a collection of short stories in translation, "Aghion Bai and Other Stories" (2019) She writes extensively on Indian Music as a reviewer and essayist.

Her works have been translated into many languages, and several of them are taught in colleges and Universities.

As a translator herself, she has translated into English the works of some of the best known Assamese writers of fiction, including

"Blossoms in the Graveyard", a translation of Janeth Awardee Birendra Kumar Bhattacharjee's "Kobo Aru Pool" Her column "All Things Considered" in the Assam Tribune is widely read. She has been extensively anthologized, also.

Among the awards she has received so far have been the UNICEF-CBT Award for children's fiction, the Katha Award for Translation, the Telegraph-Vineet Gupta Memorial Award for short fiction, etc.

Two new books by author MITRA PHUKAN have been released, a fortnight apart from each other! The first is a collection of her short stories, “A Full Night’s Thievery.” The other is her translation of Janeth Awardee Birendra Kumar Bhattacharyya’s book, “Kobo Aru Pool,”

which she has named “Blossoms in the Graveyard.” Mitra Phukan talks to the Managing Editor of “The Thumb Print – A Magazine from the East,”  Teresa Rehman, on her two books that look set for the literary long haul.

Two of your books have been released, two weeks apart from each other, back to back! Congratulations. Can you tell us more?

Thank you, Teresa, I am so excited! It wasn’t planned that they would come out at the same time. But I have been toiling over both the books this past year, with mails flying between the publishers, editors, and me. I am so delighted that they have come out now, from two highly regarded publishers.

At times, a mail meant for one would go to the other from me! And both sets of publishers and editors have really been so very professional and helpful too. As you can see, both covers are eye catching …their work, their sensitivity to the content, and their understanding of my vision has impressed me greatly.

‘A Full Night’s thievery’ sounds like an exciting collection of stories. Can you tell us what to expect in this book?

This is a collection of thirteen of my short stories. I have written them over the years, as and when inspiration struck. Several have appeared in highly regarded journals in India and abroad, as well as in e journals. A couple of them have won awards.

Several have been translated into many languages, Indian and European. I am very happy that one has been translated into my mother tongue, Assamese, also. The others are new. However, I have re worked even the older stories intensively, layering them, and adding the insights that come to any writer, any person, with the passage of time. In that sense, all the stories in this collection are new.

The themes of the stories are varied. I am quoting the blurb here. ”In this collection, Mitra Phukan sounds the rhythms of contemporary Assamese society, deftly weaving universal themes of love, loss, and ageing with some of the issues facing the region: militancy, witchcraft, and traditional ways of life. Her stories acutely depict people’s struggles to relate to each other across vast social gulfs and within the intricacies of family and love. Intimate, allusive and wryly observed, “A Full Night’s Thievery” is a finely drawn portrait of humanity.”

I love creating characters, and setting them within the context of the themes I have in mind. I totally enjoyed writing these stories, spread out over many years. For me, the characters who populate this book are as real as those I meet in the street. But of course they have all come from my imagination.

I have tried to keep the language and style as simple as possible. The title comes from one of the stories, which is about Moon Sur, the village thief of Rupia, in Western Assam in the late forties of the last century! I loved writing this, as indeed I loved working on all of them. The moods vary, from the humorous to the poignant.

The translation of Janeth Awardee Birendra Kumar Bhattacharyya’s book, “Kobor Aru Phool”, which has been named “Blossoms in the Graveyard” is another monumental work. Please tell us about your experience as a translator?

Translation is my way of “paying my dues” to my mother tongue. In this case, when the Birendra Kumar Bhattacharyya Trust approached me to translate this slim book, I readily agreed. I have always been a huge admirer of this author, both as a writer and a person. His humanism imbues his work, as it imbued his life.

I am a very slow translator. It took me more than a year to complete this manuscript, of course with pauses during which I worked on my original writings and columns, too. It is such a moving story, I often found myself weeping as I translated it.

I don’t know whether I have done justice to the work. As a translator, I have always tried to subjugate my own style of writing to the author’s. I have tried, as best as I was able, to do that in this book, too.

“Blossoms in the Graveyard” is set in the backdrop of recent history. It’s set in Bangladesh during the war of liberation. Do you think it will help in better understanding of ties between the two countries?

I do hope so, Teresa. There is a deep humanism that suffuses the work, and I hope this spirit will work to bring about an understanding that might go towards resolving long standing problems and issues.

The heroine of “Blossoms in the graveyard” is a Muslim girl called Mehri. Please tell us how did you go about understanding the nuances of a Muslim women’s life while translating this book?

Mehri is such a beautifully drawn character, delicate yet with the strength that comes from being of the soil. Her character develops during the course of the story, as she goes through all kinds of horrific experiences, but also some beautiful ones. Mehri is also a metaphor for the struggle of Bangladesh itself towards freedom.

Religion plays a huge part in this book. It is a very nuanced vision. Time and again, the author emphasizes the fact that Pakistani Muslims were raping and killing Bangladeshi Muslims. It was Bangla nationalism, not religion, that was at the core of the struggle. And there are several Hindu characters, too, who are finely drawn, who serve to show the secular character of the struggle. This should surely resonate with us today.

Because of the many references to Islam, I consulted several knowledgeable, practicing, devout Muslims. Dr Swab era Islam was my go-to person for the references. Música Islam also helped me considerably in this. There were many references and quotations from the Holy Quran that I needed help with.

Actually, this is a book written in several languages! Assamese, Bangla, with smatterings of Urdu and English! There are some beautiful Bangla songs that were challenging to translate. Rabindra Sangeets, Baul Geets, Folk songs …and many others!

Do you think these two books will help in changing the usual narrative from this region?

I certainly hope so, Teresa! The short stories are definitely of the kinds that have never been written before, in English or Assamese.  The theme of music recurs often in them, and I don’t think too many in this region are working on this theme at this point of time. As for the translation, when the author herself is none other than such a literary stalwart, it is highly likely that the usual narrative from this region will definitely be modified.