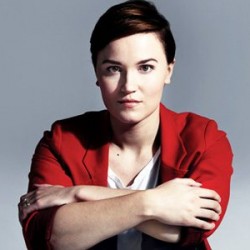 Veronica Roth is the #1 New York Times bestselling author of Carve the Mark and the Divergent Series (Divergent, Insurgent, Allegiant, and Four: A Divergent Collection). Her short stories and essays have appeared in Summer Days and Summer Nights, Shards and Ashes, and the upcoming Three Sides of a Heart. The Divergent Series was developed into three major motion pictures.

Veronica grew up outside of Chicago and graduated from Northwestern University. She now lives in Chicago proper with her husband and dog and writes full-time.

We talk to the bestselling author about her Divergent series and brand new short story collection, The End and Other Beginnings.

Veronica Roth is no stranger to the YA world, having penned the very successful Divergent series, which was adapted into a series of movies starring Shailene Woodley. The New York Times bestselling author went on to build a new world with the Carve The Mark duology (since trilogies are so passé), and now she’s back with her new short story collection The End and Other Beginnings. Cultured Vultures got the opportunity to speak with the prolific author about love triangles in YA, her science fiction influences, and her thoughts on whether we are alone in the universe.

Let’s start with a hard question: Four and Tris, Peeta and Katniss, or Winston and Julia (George Orwell’s 1984)?

It’s impossible for me to answer this without bias. Tris and Four, of course! They lived in my brain for five years. Also I’m not sure Winston and Julia can ever really get over that whole rat mask thing.

One of the markers of YA fiction seems to be the establishing of a love triangle. Did you contemplate adding one for Divergent?

Cards on the table: I love a love triangle. They’re so rarely about THIS love interest or THAT one—they’re about which path the main character wants to walk, and which version of themselves they want to embrace. That said, no, I didn’t consider writing one into Divergent. It was almost like the inverse of what I just said—Tris and Four didn’t need a third party to reveal them to themselves—they were discovering that on their own, and that’s where the tension and growth in their relationship came from. That’s what I was interested in: not a conflict that was external to the relationship, but one that came from inside of it.

Was it difficult to craft Four’s perspective in Allegiant, after spending the first two books in Tris’ perspective?

The biggest difficulty was trying to build a voice that sounded distinct from Tris’s, which wasn’t something I had a lot of experience with at the time. Looking back, I’m not sure he does sound that different, but there are some subtle distinctions. He’s more descriptive and poetic than she is, which I loved—not something you’d expect from a tough Dauntless guy.

As far as the actual going into his head part goes, though, no—that part wasn’t hard at all. I always felt like I was in his head anyway.

You mentioned before that when you begin writing about the factions in Divergent, you were imagining a Utopia, and as we know, this panned out differently. Is there any story in the collection that ended up being something you didn’t originally conceive?

I do a lot less discovering as I go when I write short stories. That has to do with the way the ideas come to me: they take a lot longer to find a shape, oddly enough, but when they do, it’s all in one big gulp, whereas writing a novel is more of a series of smaller bites. That said, I was really shocked by how detailed the world-building in The Transformationist became. It’s set in the Carve the Mark universe, but on a planet I didn’t explore at all in that series. I didn’t really intend to show that much of it in the story, because I didn’t think I had the space, but I felt like I knew that place, through Otho, the main character. The story is about, among other things, reconnecting to a home you have complicated feelings about, so the way Otho experiences his return just invites that kind of world-building.

Did crafting a short story collection change your writing process in any way?

Not really! I’ve always written short stories, and I probably always will. What’s different about THE END is that they’re conveniently located in one place. And beautifully illustrated.

The End and Other Beginnings is filled with sci-fi elements. Do you have any go-to sci-fi novels, or works that inspired your collection?

On my own, I read a lot of science fiction, so I’m always taking in new inspiration, particularly in the form of short stories. This year I read all the short fiction that was nominated for the Hugo awards, and it was stellar, particularly Daryl Gregory’s Nine Last Days on Planet Earth, Sarah Gailey’s STET, and the Murderbot Diaries by Martha Wells. My first foray into sci fi short stories was Philip K. Dick, though—just a font of ideas. I find a lot of inspiration outside of science fiction, too—I love Alice Munro’s short stories, and Olive Kitteridge by Elizabeth Strout, and just discovered Mouthful of Birds by Samanta Schweblin. Whatever I’m writing, I try to find the human parts of it first, and let the science fiction parts unfold as a part of that person’s world. So really, it doesn’t matter what genre I’m reading in—what matters is how well an author has showed me what being human is.

The premise of this collection reminds me of Black Mirror. Have you watched the series, and if so, what are your favourite episodes?

I’ve watched some of it, though not all! One of my favorite episodes is Fifteen Million Merits. I have to go through that show very slowly, though, because I find most of the episodes so disturbing. After I watch one I have to look up videos of puppies and kittens on Youtube.

As an author, one is bound to get a spectrum of reviews on one’s book. How do you deal with the criticism, if any?

For the most part, I try not to read them, positive or negative. I said this once to someone and they got angry at me, thinking I didn’t want to grow as a writer. But I learned a long time ago that you don’t necessarily grow as a writer by reading reviews. Maybe some writers do, and more power to them. But personally, I grow through the act of writing, by getting honest critique from editors and critique partners, and by reading widely. And really, reviews are going to come into my life whether I want them to or not, so I don’t need to seek them out. I also don’t get that upset when I’m tagged in them. Only I am responsible for what I read online. If I don’t want to see something, I don’t look at it.

“The Spinners” deals with Alien life. Do you believe we are not alone in the Universe?

In “Hearkeners”, music is viewed as a hopeful thing that offers some joy in a world marked by war. What are some songs on your playlist that bring you joy?

Right now? Juice by Lizzo. Cruel Summer by Taylor Swift. Hold You Now by Vampire Weekend. Santa Monica by Everclear. And Mesopotamia by The B-52’s.

Would you choose to hear life songs or death songs?

Probably death songs! The reason is a bit silly: I’m awkward and uncomfortable around babies. And people would want you to attend births if you were a Hearkener who heard life songs! I would be better at dealing with grieving people. I’ve done that before, and while it’s hard, and sad, I think I would feel a distinct sense of purpose in those situations, giving people something that would be a small comfort.

In the story “Inertia”, Claire does performance art by showing her class her brain. What would you produce for an art class?

Probably a photograph. I’m a mediocre photographer at best, but I do enjoy taking pictures.

Do you have a favourite superheroine?

I was obsessed with Rogue as a child. I’m still mad about what they did to her in X-Men: The Last Stand.

While I was reading the collection, I could imagine it being a TV series. Is that something that’s potentially in the cards?

What made you decide to add illustrations to your work?

It wasn’t something I even considered as a possibility, honestly—my editor asked me how I would feel about it being illustrated, and my response was a series of exclamation points. The illustrations in this book are amazing. I’m so lucky Ashley Mackenzie agreed to do them, and every updated sketch or piece of art was a joy to see.

Out of all the stories, which of the worlds would you consider expanding on?

Oh man. I think the one that felt the biggest to me, with the most room for expansion, was The Transformationist. (Or Armored Ones, but I already wrote that series!) There is so much space to grow in the Carve the Mark universe, so maybe one day I’ll be able to return to it. I could also see The Spinners being bigger, too. I love those sisters, and their alternate Earth is so much fun. This is all speculation, though—no concrete plans or commitments!

Since the title of the collection is such, choose your favourite ending and beginning from any work of literature (doesn’t have to be the same book).

I can’t choose an actual favorite, but I’ll give you the first ones that come to mind. For a beginning, Hitchhiker’s Guide to the Galaxy by Douglas Adams. (“Orbiting [this sun] at a distance of roughly ninety-eight million miles is an utterly insignificant little blue-green planet whose ape-descended life forms are so amazingly primitive that they still think digital watches are a pretty neat idea.”)