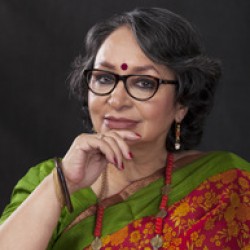 Author, poet and translator, Deepa Agarwal grew up in the pristine Kumauni region set in foothills of the Himalayas.

She writes for both children and adults and has over fifty published books to her credit, including Puffin Classics: Chandrakant and Listen, O King! Five-and-Twenty-Tales of Vikram and the Vital.

A frequent contributor to magazines and journals in India and abroad, she has edited, compiled and contributed to several anthologies.

Among other awards, she received the NCERT National Award for Children's Literature in 1993 for her picture book Ashok's New Friends, while her historical fiction Caravan to Tibet was on the 2008 IBBY (International Board on Books for Young People) Honor List.

Her works have been translated into several Indian and foreign languages. For more information, you can visit her website: www.deepaagarwal.com.

We interviewed a very much experienced author who is focused only on one niche. Yes, we interviewed Deepa Agarwal, who writes about children fiction. Deepa Agarwal was born in Almora, Uttarakhand and is an M.A. in English from the University of Allahabad.

She taught English in S.P.M. College, New Delhi for some years. Currently she writes fiction and poetry for both children and adults and translates from Hindi into English. At present she is compiling a collection of outstanding Indian non-fiction for children and working on a fantasy novel.

Deepa has around fifty books published in English and Hindi. Her poetry and short fiction has been published in journals like Indian Literature, Indian Horizons and Manushi among others and featured in anthologies.

Both her short story collection If the Earth Should Move…and her poetry collection Do Not Weep Lonely Mirror have received critical acclaim as has her translation of Chandrakanta, Devakinandan Khatri’s famous Hindi classic.

Her historical fiction Caravan to Tibet was selected for the IBBY (International Board on Books for Young People) Honour List 2008 as the best book from India and translated into Korean. Five of her titles have been listed in the White Raven Catalogue of notable books brought out by the IYL Munich.She has also received fellowships to research children’s literature from the Austrian government and the Ministry of Culture, Government of India.

I have always been an avid reader and I firmly believe that all the great books I read inspired me to become a writer. I had a flair for writing since my school days and often won prizes in writing competitions.

When I was in college I did write a few short stories but never made a serious attempt to get them published. It was much later in life, after my three daughters had started going to school that I thought of taking up writing as a profession.

What did you like to read when you were a girl?

There wasn’t a large variety of children’s books available when I was a child and I had graduated to books meant for adults by the age of 11-12. My parents were passionate about reading and bought a lot of books for me, both fiction and information. I read magazines like Chandamama and Parag along with classic works in English like Alice in Wonderland, Heidi, Little Women,What Katy Did, the abridged versions of classics like War and Peace and many others.

When I joined boarding school at the age of seven, I discovered the numerous works of Enid Blyton, Angela Brazil–a writer who has been forgotten now, the Chalet School series by Elinor Brint-Dyer and the Abbey School series by Elsie Oxenham. I read a lot of classics and Charles Dickens was one of my favourite authors. But very soon I had moved on to Agatha Christie’s detective fiction, P.G. Wodehouse and Alistair Maclean, A.J. Cronin and other popular writers of the time.

I would not like to generalize because each book poses a different challenge. Sometimes you begin with a great idea but it’s hard to get the plot moving. At others your characters will not shape up or you find that their motivation is not strong enough to hold the narrative together. Perhaps the greatest challenge is staying with a book when it’s not going the way you want it to. Getting a book accepted by a publisher can also be very challenging.

That again depends on the kind of book it is. A historical fiction or a biography would require more research than say, a real life story that revolves around a situation and characters familiar to me. Some books like my adventure novel Caravan to Tibet took years of research. I read many books, watched films on Tibet and talked to people knowledgeable about the region and its customs.

What motivated you to write the book “Chanakya the Master of Statecraft”?

Chanakya the Master of Statecraft was actually commissioned by the publisher Puffin/Penguin.

I had done another title in the Puffin Lives series–Rani Lakshmibai and they suggested Chanakya after that.

Can you tell us more about the book “Chanakya the Master of Statecraft”?

Chanakya is one of the most important figures in Indian history. He was Chandragupta Maurya’s mentor and played a crucial role in establishing the Mauryan empire, the first great empire in the Indian sub-continent.

He also compiled the Arthashastra, one of the most significant works on statecraft. Chanakya is an intriguing personality, only it was very hard to locate information about him that could be considered 100 per cent accurate.

Many people believe that history is a collection of dates you can get from books. However, historical information from ancient times, before events and dates were recorded exactly is often vague and contradictory. There are different theories about Chanakya’s origins, his date of birth and the other events in his life.

Most of the information I got was from legends narrated in Buddhist and Jain writings, the works of Greek and Roman historians who wrote about Alexander’s invasion of India and the account of the Greek ambassador Megasthenes’s visit to Chandragupta’s court.

I exercised my own judgement and have told Chanakya’s story in a style that I thought children would enjoy reading, using the various legends about him and adding what historical facts were available.

I have also shown how much of the material for theArthashastra was derived from his own experiences of governance. Chanakya was a brilliant mind, one of the greatest thinkers our country has produced but while I was working on the book I could not help wondering if he was the right role model for children.

Biographies for children are meant to be inspirational and Chanakya was totally driven by his feelings of revenge against Dhana Nanda. This king of Magadh (modern Bihar) had openly insulted him in court and Chanakya swore to dethrone him, which he did eventually. What is fascinating is that he was so focused that he adopted a young boy–Chandragupta, and trained him to accomplish his purpose thus changing the course of history. He was a very shrewd politician and did not hesitate to use whatever means possible, however violent, to accomplish his ends.

Chanakya’s life makes a fascinating story and I would have liked to make it even more dramatic but since it is part of a series I had to follow the pattern laid down.

How did you came up with the idea of writing books for children?

It happened by chance. I used to be a teacher but gave up my job. Later I took up free-lance writing and began to contribute articles to magazines and newspapers. Once when I was glancing through a book my daughter was reading, it struck me that I could try my hand at fiction for children too. It took a few tries but eventually I managed to get published. And somehow, after a few years, I began to concentrate almost entirely on this genre of writing.

Who are your favourite authors?

I have so many favourite authors that it would hard to list them all so I’m mentioning only those who come to mind right now. Among the classic writers I admire Tolstoy, Jane Austen and Dickens. Roald Dahl and Cornelia Funke are among my favourite children’s writers. I am also a fan of Amitav Ghosh, Anees Salim, John Irving and Alice Munro.

How much time do you dedicate for writing on a daily basis?

Ideally I would like to write for at least five hours every day but it’s not always possible. I try to make it two at least.

First I would say, read as much as you can. Remember,words are a writer’s tools and reading is the best way to acquire ease in the use of language, discover the logic of fiction and pick up techniques of craft.

Workshops and all the information you get on the Internet can be useful but you cannot be a writer of any worth unless you are a reader. Writing demands a lot of you and like in any other profession, you have to put in a lot of hard work to achieve any kind of success.

Also, don’t give up if you believe in the book you are writing and don’t take up this profession if you’re simply looking for instant fame and hoping to make big money. It just doesn’t happen that way.