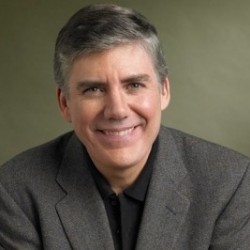 Rick Riordan is the #1 New York Times bestselling author of over twenty novels for young readers, including the Percy Jackson series, the Kane Chronicles, the Magnus Chase series and the Trials of Apollo. He is also the author of the multi-award-winning Tres Navarre mystery series for adults.

For fifteen years, Rick taught English and history at public and private middle schools in the San Francisco Bay Area and in Texas. While teaching in San Antonio, Saint Mary’s Hall honored him with the school’s first Master Teacher Award.

While teaching full time, Riordan began writing mystery novels for grownups. His Tres Navarre series went on to win the top three national awards in the mystery genre – the Edgar, the Anthony and the Shamus. Riordan turned to children’s fiction when he started The Lightning Thief as a bedtime story for his oldest son.

Today, eighty-six million copies of his books are in print in the United States, and rights have been sold into more than 37 countries.

Rick Riordan now writes full-time. He lives in Boston with his wife and two sons.

When did you start writing?

I wrote a lot of short stories when I was young, and even sent a few in (to get rejected). I was never serious about writing at university. I focused most of my creative energy on music, and was lead singer in a folk rock band, if you can believe it.

After college, I became a teacher, and was quite happy with the idea of doing that the rest of my life. However, I read a lot of mystery books in my spare time, and eventually decided, on a lark, that I would try writing a hard-boiled private eye novel. My first was published in 1997. I wrote grown-up mystery novels for about seven years before I started the Percy Jackson series for young readers.

Where do your ideas come from?

My son Haley was studying the Greek myths in second grade when he asked me to tell him some bedtime stories about the gods and heroes. I had taught Greek myths for many years at the middle school level, so I was glad to comply. When I ran out of myths, he was disappointed and asked me if I could make up something new with the same characters. I thought about it for a few minutes. Then I remembered a creative writing project I used to do with my sixth graders—I would let them create their own demigod hero, the son or daughter of any god they wanted, and have them describe a Greek-style quest for that hero. Off the top of my head, I made up Percy Jackson and told Haley all about his quest to recover Zeus’ lightning bolt in modern day America. It took about three nights to tell the whole story, and when I was done, Haley told me I should write it out as a book.

I had a lot to do already, but I somehow found the time to write the first Percy Jackson book over the next year. I just really enjoyed writing it. The story was such fun, and so different from my adult fiction, that I found myself spending a lot of time on it. Now, I’m sure glad I did!

Can you give three tips for becoming a successful writer?

1. Read a lot! This is where you’ll get your inspiration, your “fuel” for your writer’s engine.

2. Write a little bit every day. Writing is like a sport. The more you practice, the better you get.

3. Don’t get discouraged! Rejection is part of writing, but if you stick with it, you will succeed.

Favourite place in the world

The San Francisco Bay Area, because it’s so beautiful and such a fun place to live!

If you hadn’t been an author, what would you have been?

A teacher! I taught school for many years, and loved it. If writing didn’t keep me so busy, I would definitely be back in the classroom.

Interview reproduced with thanks to Puffin Books.