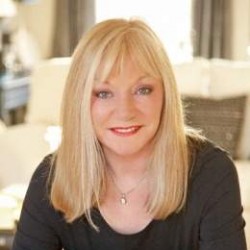 Penelope "Penny" Jones was born on November 24, 1946 at about seven pounds in a nursing home in Preston, Lancashire, England. She was the first child of Anthony Winn Jones, an engineer, who died at 85, and his wife Margaret Louise Groves Jones. She has a brother, Anthony, and a sister, Prudence "Pru".

She had been a keen reader from the childhood - her mother used to leave her in the children's section of their local library whilst she changed her father's library books. She was a storyteller long before she began to write romantic fiction. At the age of eight, she was creating serialized bedtime stories, featuring make-believe adventures, for her younger sister Prue, who was always the heroine. At eleven, she fell in love with Mills & Boon, and with their heroes. In those days the books could only be obtained via private lending libraries, and she quickly became a devoted fan; she was thrilled to bits when the books went on full sale in shops and she could have them for keeps.

Penny left grammar school in Rochdale with O-Levels in English Language, English Literature and Geography. She first discovered Mills & Boon books, via a girl she worked with. She married Steve Halsall, an accountant and a "lovely man", who smoked and drank too heavily, and suffered oral cancer with bravery and dignity. Her husband bought her the small electric typewriter on which she typed her first novels, at a time when he could ill afford it. He died at the beginning of 21st century.

She earned a living as a writer since the 1970s when, as a shorthand typist, she entered a competition run by the Romantic Novelists' Association. Although she didn't win, Penny found an agent who was looking for a new Georgette Heyer. She published four regency novels as Caroline Courtney, before changing her nom de plume to Melinda Wright for three air-hostess romps and then she wrote two thrillers as Lydia Hitchcock. Soon after that, Mills and Boon accepted her first novel for them, Falcon's Prey as Penny Jordan. However, for her more historical romance novels, she adopted her mother's maiden-name to become Annie Groves. Almost 70 of her 167 Mills and Boon novels have been sold worldwide.

Penny Halsall lived in a neo-Georgian house in Nantwich, Cheshire, with her Alsatian Sheba and cat Posh. She worked from home, in her kitchen, surrounded by her pets, and welcomed interruptions from her friends and family.

Penny Jordan's love of stories began with the tales told by her grandmother. Now she writes 5,000 words a day as an author of Mills and Boon bodice-rippers which have sold 70 million copies around the world. Peter richardson found out more

It's just another day for writer Penny Jordan. A breakfast of muesli and eggs precedes a playful romp with pet alsatian Sheba, before she settles down to the task of penning another 5,000 words for an ever-eager publisher.

Such are the demands of being the author of around 200 romantic novels, the popularity of which has resulted in worldwide sales of over 80 million.

And it all began in Penwortham...

Her time in the heart of Lancashire wasn't long. Preston born in 1946, the first of engineer Tony Winn Jones' three children, she was whisked off to the wilds of Todmorden aged nine, when her father took another job.

But, as a Cop Lane Primary schoolgirl with a mother who recognised the importance of books and a grandmother who loved to tell stories, the seeds were being sown for a career which would only get off the ground in her 30s.

At her home in Cheshire, Penny, now 61 and living alone after the death in 2000 of husband Steve, remains fond of her roots.

Her family surname "Winn Jones" is neither hyphenated nor the product of any desire to climb the social ladder.

It's because her grandmother Elsie, the proud descendant of a family of Preston butchers, refused to give it up when she married Mr Jones, a Merchant Navy purser from Liverpool: "She was before her time," says Penny. It's quite common for girls to keep their maiden name when they marry these days, but it was revolutionary back then."

It was grandma Elsie who would sit with Penny by the fire, telling embellished family tales, such as the time she made a pastry case for a pie, only for dad to come along and fill it with worms: "It's funny how that sort of stuff stays with you," she laughs.

She quickly became a keen reader, once the words began to make sense: "I was seven before I could read properly," she remembers, "but there was no stopping me after that."

Her thirst for the written word would be quenched during visits to Penwortham Library where mum Jackie, now living near Glossop, would leave her in the children's section whilst she changed her father's books.

At eight, Penny was making up her own bedtime stories for younger sister Pru, while continuing the process of growing up as the 1960s dawned on Broadoak Lane: "It was quite a rural place then. We kept hens and grew our own veg and I remember playing at a nearby house with a see-saw in the garden," she says.

"It was the home of a test pilot and he had two little girls. His name was Squires, as I recall, and he was famous for surviving when his plane came down in the Channel.

"I was sad to leave, especially when we got to Todmorden. It was a wet day and everywhere was so grey..."

After grammar school and secretarial college Penny got a job with the Midland Bank as a typist.

She met husband Steve Halsall at a jazz club. She'd been trying her hand at writing for a few years, but never dreamed she would be published.

Says Penny: "My husband really supported me. The turning point came when he bought me this small electric typewriter. It was 36 - a lot of money back in the Seventies. He could barely afford it but he knew I was keen.

"He'd be watching the TV and I'd be typing away. He said he always knew when I was writing about sex because I would suddenly start going faster. I got so embarrassed in those days..."

She entered a competition run by the Romantic Novelists' Association. Although she didn't win, she found an agent who was looking for the new Georgette Heyer.

She had four regency novels published as Caroline Courtney, before changing her nom de plume to Melinda Wright for three air-hostess romps.

Mills and Boon accepted her first novel for them - Falcon's Prey - under the name Penny Jordan, when she was 33.

"I got called down to London and bought this peach-coloured suit for the occasion," says Penny, "but I must have looked a bit of a crumpled mess when I got there because I was walking towards their offices and a motorist pulled over and asked me if I was looking for business!"

Almost 70 million of her 167 Mills and Boon novels have been sold worldwide. That she uses "Jordan" instead of Halsall, her married name, is the result of a suggestion from her editor: "I liked the sound of it," she says. "I like Halsall too. It's just that there's scope for getting it wrong, like Hassle or Hashall or something..."

Her latest venture is a three-part trilogy which spans the decades from the 1930s to the present day. The first book, Silk, is reviewed opposite.

Suffice to say it was out on June 30 and is already selling well.

So there we have it...the story of a child from Penwortham whose nose for a library book and the love of a tall tale from her grandma spawned a prolific writing career: "I'm as amazed as anyone," she says.