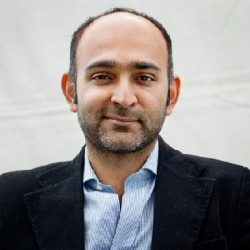 Although he was born and raised in Lahore, Pakistan, award-winning novelist Mohsin Hamid spent part of his childhood in California while his father attended grad school at Stanford.

Returning to the U.S. to complete his own education, Hamid graduated from Princeton University and Harvard Law School.

He worked for a while as a management consultant in New York, then moved to London, where he continues to work and write.

Hamid made his literary debut in 2000 with Moth Smoke, a noir-inflected story about a young banker living on the fringes of Lahore society who plummets into an underworld of drugs and crime when he is fired from his job.

Providing a rare glimpse into the complexities of the Pakistani class system, the book was called ""a brisk, absorbing novel"" (The New York Times Book Review), ""a hip page-turner""

(The Los Angeles Times), and ""a first novel of remarkable wit, poise, profundity, and strangeness"" (Esquire).

Moth Smoke received a Betty Trask Award and was named a New York Times Notable Book of the Year.

In 2007, Hamid added luster to his reputation with The Reluctant Fundamentalist. Written as a single, sustained monolog, this "elegant and chilling little novel"

(The New York Times) is an electrifying psychological thriller that puts a dazzling new spin on culture, success, and loyalty in the post-9/11 world.

The book became an international bestseller, as well as a Barnes & Noble Recommends selection; it was shortlisted for the Man Booker Prize, the Decibel Award, and the Commonwealth Writers Prize, and went on to win the South Bank Show Award for Literature.

There is no question that Hamid's unusual life experience, a cross-cultural stew of influences and perspectives, has informed his fiction.

In addition to consulting and writing novels, he remains a much-in-demand freelance journalist, contributing articles and op-ed pieces -- often with a Pakistani slant -- to publications like Time magazine,

The Guardian, The New York Times, The Independent, and The Washington Post. He holds dual citizenship in the U.K. and Pakistan.

An interview with Mohsin Hamid

Mohsin Hamid is the author of the novels Moth Smoke, The Reluctant Fundamentalist, and How to Get Filthy Rich in Rising Asia. His award-winning fiction has been featured on bestseller lists, adapted for the cinema, shortlisted for the Man Booker Prize, and translated into over 30 languages.

His essays and short stories have appeared in the New York Times, the Guardian, the New Yorker, Grant, and many other publications. Born in 1971 in Lahore, he has spent about half his life there and much of the rest in London, New York, and California.

Much of Mr. Hamid’s work focuses on issues relevant to his native Pakistan, namely globalization and the intersection of modernity and tradition. In the brief interview below, Mr. Hamid discusses these themes with the editors of Oxford Islamic Studies Online, an online resource designed to foster a more accurate and informed understanding of the Islamic world.

In a recent interview with Anis Shivani, you mentioned the development of the artistic community in Pakistan. “There may not be much support from the state,” you said at the time, “but there’s popular respect for the arts among people…people here care about fiction.” Can you elaborate on this? Have there been any specific events or trends in recent years that have helped or hindered the development of a modern Pakistani literary culture?

Mohsin Hamid: Pakistan has long had a modern literary culture—and has always had an ancient one for that matter. What’s new, perhaps, is the number of writers writing in English and the amount of attention they are getting abroad.

Historically, as a society with low literacy, the dominant literary form has been poetry, which is popularized through song. Sung poetry is hugely popular and well known, and classical poets are venerated as saints.

People visit their shrines, speak of them with veneration, even invoke them in prayers for blessings. It’s on that foundation that attitudes to modern literature in Pakistan are built. So there is real respect and warmth for the writer, for the notion of the writer.

There is also suppression and violence towards the heterodox, which comes from the state and from militant groups. So literature exists in a state of tension, between real warmth on the one hand and real hostility on the other.

Along with a commentary on globalization, your novel How to Get Filthy Rich in Rising Asia has an environmental message to it. The protagonist (the “you” of the story) is an enterprising young man who makes a fortune by selling filtered tap water as high-end mineral water, taking advantage of one of the many challenges facing growing urban centers in Asia. As a follow-up to the last question, are there any other social issues in this region that you would like to see more fiction writers address in their work? Are there pressing issues that they have so far shied away from, in your opinion? Any genres you’d like to see Pakistani writers explore, such as science fiction?

Mohsin Hamid: I’m a reader at least as much as I’m a writer. And as a reader I look for many things. Politics can be one of those things, but isn’t always. I look for language, for form.

And also for plot. A rip-roaring yarn, well-written, is always a pleasure to read. I’m very intrigued by the new, by what I haven’t seen done before. And so, yes, good science fiction from Pakistan would be very exciting to me.

Many Western readers may be surprised to find that religion does not have a more overt role in your most recent novels. That is not to say that it has no role, but your work seems to suggest that the political dimension of religion has been muted, and that the more pressing concerns of unemployment, violence, and educational opportunities have a greater impact on a person’s life in modern Pakistan. Is this accurate? And how do you see the role of religion changing as Pakistani culture changes?

Mohsin Hamid: Actually, religion is important to all of my novels, especially the last two. The Reluctant Fundamentalist looks at the politics of religious identification as something separate from the spirituality of religion. It’s about religious tribalism in a way.

How to Get Filthy Rich in Rising Asia is about spirituality, and uses elements of Sufi tradition to examine a love-based spirituality as an antidote to the depression of modernity. Neither of them uses the word “religion” very much, but each explores a different side of phenomena that are religious.

Among the many influences for How to Get Filthy Rich you have discussed is the tradition of Sufi poetry. Like the mystical poets, you use a second-person narrative device. Can you go into more detail about how this tradition has influenced your work, and what specific Sufi masters have been the most important in this regard?

Mohsin Hamid: Attar, Rumi, Ghalib—the list of Sufi poets that I’ve been influenced by is probably longer than I can articulate, since in addition to those I’ve read, there are many more who have shaped the culture of Lahore in which I grew up. My first novel, Moth Smoke, was in a sense a post-modern riff on the Sufi theme of the love of a moth for a candle flame.

Moth Smoke looked at what happened after such a love was consummated. What is interesting about Sufi thought is that, although it emerges from a Muslim tradition, it transcends religious groupings and can even transcend religious faith. It’s humanist in many ways.

Yet it is also ancient, and has co-existed with much more orthodox forms of religion for well over a thousand years. That fascinates me. The Sufi notion that love enables transcendence fascinates me. I’m drawn to explorations that base their inquiry on what one feels, rather than on what one believes.

You have said that you finished the first draft of the novel The Reluctant Fundamentalist in the summer of 2001. How much did the events of 9/11 change the structure, tone, and themes of subsequent drafts? For example, was the unnamed American character who listens to the protagonist a product of the new political context?

Mohsin Hamid: The novel changed completely. The basic plot was the same: a Pakistani man grows a beard and moves back to Pakistan, leaving behind a well-paying job and doomed love affair in New York.

But the tone, the voice, the style, the frame, the specific events—all of that changed. Before 9/11, there was no American listener in the novel. It was a quiet folk tale, a parable. Then it became something else. It had to.

You have discussed the issue of American drone strikes in your essays, short fiction, and even in a brief section of How to Get Filthy Rich. Besides your moral and political opposition of this type of warfare, is it safe to say that your work depicts this technology as a metaphor for the instability and conflict associated with globalization?

Mohsin Hamid: I think of drones as dehumanizing. Machines that can watch and kill. They are part of the general trend towards surveillance and violent intervention that we see all around us. I’m not saying that I think they should never be used. But I don’t think the way they are being used in the Pakistani context is helpful.

They contribute to an infantilization of Pakistani discourse and a failure of Pakistan to tackle its problem of militancy itself. At a broader level, human beings and machines are integrating, and in the process human beings are becoming more machine-like. It’s not a development I find particularly beautiful.

Robert Repine is an Editor in the Reference department of Oxford University Press. After serving in the Peace Corps in Grenada, he earned an MFA in Creative Writing at Emerson College. His work has appeared in numerous publications, including The African American National Biography (2nd Edition), The Literary Review, The Coachella Review, Hobart, and JMWW. His debut novel Mort(e) is forthcoming from Soho Press in 2014. You can follow him on twitter @Repino1.

Oxford Islamic Studies Online is an authoritative, dynamic resource that brings together the best current scholarship in the field for students, scholars, government officials, community groups, and librarians to foster a more accurate and informed understanding of the Islamic world.

Oxford Islamic Studies Online features reference content and commentary by renowned scholars in areas such as global Islamic history, concepts, people, practices, politics, and culture, and is regularly updated as new content is commissioned and approved under the guidance of the Editor in Chief, John L. Esposito.