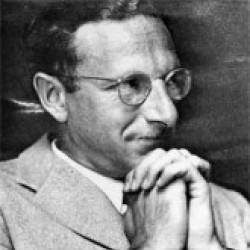 Eric Berne was a Canadian-born psychiatrist best known as the creator of transactional analysis. Eric was born on May 10, 1910 as Eric Lennard Bernstein in Montreal, Canada.He and his sister Grace, who was five years younger than Eric, were the children of a physician and a writer, David and Sara Gordon Bernstein.David Bernstein died in 1921, and the children were raised by their mother.

Bernstein attended Montreal's McGill University, graduating in 1931 and earning his M.D., C.M. in 1935.While at McGill he wrote for several student newspapers using pseudonyms. He followed graduation with a residency in psychiatry at Yale University, where he studied psychoanalysis under Paul Federn.

In 1943 he changed his legal name to Eric Berne.He continued to use pseudonyms, such as Cyprian St. Cyr ("Cyprian Sincere"), for whimsical articles in the Transactional Analysis Bulletin.

Berne's training was interrupted by World War II and his service in the Army Medical Corps, where he was promoted to the rank of Major. After working at Bushnell Army Hospital in Ogden, Utah, he was discharged in 1945.