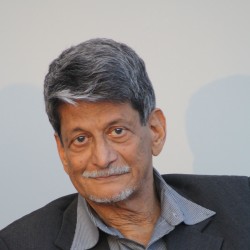 Kiran Nagarkar was born in Bombay in 1942. In addition to plays and screenplays, he has written four novels, establishing his reputation as an outstanding representative of contemporary Indian literature.

His books are a target of ideological critique due to the hybrid nature of his version of postcolonialism, involving irreverence alongside seriousness.

Nagarkar studied at the Ferguson College in Bombay and then worked as an assistant professor at some colleges, as a journalist and screenplay writer, and, notably, in the advertising industry.

His bitter and burlesque description of the young Bombazine Kunshan – achieved by means of a fragmented form and rendered in innovative language – is considered to be a milestone in Marathi literature.

In his first play Bedtime Story (1978), Nagarkar takes on the subject of modern responsibility by broaching the topic of political crises of the day (for instance the Cuban Crisis, the Vietnam War, and the State of Emergency called for by Indira Gandhi).

Due to problems with state censorship as well as religiously motivated restrictions that prevailed over the cultural scene, the play was not staged until 1995. His second book Raven and Eddie (1994) also met with a hostile response.

The story of the childhood of two young boys, one Hindu, the other Christian, from families who live next door to each other yet live in completely different worlds, was criticized both as anti-Hindu and anti-Christian.

The fact that Nagarakar chose to write this book and other subsequent writings in English, the language of his education, also encountered objections from his fellow countrymen.

In his subsequent novels, Nagarkar contrasts bigotry and extremism with a tolerance that feeds on doubt and is open to diversity.

In God’s Little Soldier (2006), the protagonist, who switches faiths without ever abandoning extremism, stands opposed to his questioning brother.

Consistent with the underlying idea of this book as a parable without a message Nagarkar affirms in an interview that we can never stop questioning ourselves, we must bring our convictions out into the light and prove them.

Nothing is more dangerous than being too much oneself, being completely sure of oneself, since such a belief will soon develop into an intolerance of others.

Nagarkar was distinguished with the H.N. Apte Award for the best first novel, the renowned Sahitya Award and the Dalmia Award for the furtherance of communicative harmony through literature.

He received a Rockefeller grant and was awarded a scholarship by the city of Munich. He lives in Bombay.