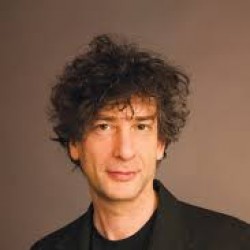 Neil Gaiman has written highly acclaimed books for children and adults and is the first author to have won the Carnegie and Newbery Medals for the same work - The Graveyard Book. The Sleeper and the Spindle, illustrated by Chris Riddell, won the 2016 Kate Greenaway Medal. His novel, American Gods, has been adapted into a major television series.

An interview with Neil Gaiman

In a not to be missed essay, Neil Gaiman talks about where his ideas come from, the differences between writers and other people, and much more. In a separate interview he talks about American Gods.

Every profession has its pitfalls. Doctors, for example, are always being asked for free medical advice, lawyers are asked for legal information, morticians are told how interesting a profession that must be and then people change the subject fast. And writers are asked where we get our ideas from.

In the beginning, I used to tell people the not very funny answers, the flip ones: 'From the Idea-of-the-Month Club,' I'd say, or 'From a little ideas shop in Bognor Regis,' 'From a dusty old book full of ideas in my basement,' or even 'From Pete Atkins.' (The last is slightly esoteric, and may need a little explanation. Pete Atkins is a screenwriter and novelist friend of mine, and we decided a while ago that when asked, I would say that I got them from him, and he'd say he got them from me. It seemed to make sense at the time.)

Then I got tired of the not very funny answers, and these days I tell people the truth:

People don't like this answer. I don't know why not. They look unhappy, as if I'm trying to slip a fast one past them. As if there's a huge secret, and, for reasons of my own, I'm not telling them how it's done.

And of course I'm not. Firstly, I don't know myself where the ideas really come from, what makes them come, or whether one day they'll stop. Secondly, I doubt anyone who asks really wants a three hour lecture on the creative process. And thirdly, the ideas aren't that important. Really they aren't. Everyone's got an idea for a book, a movie, a story, a TV series.

Every published writer has had it - the people who come up to you and tell you that they've Got An Idea. And boy, is it a Doozy. It's such a Doozy that they want to Cut You In On It. The proposal is always the same - they'll tell you the Idea (the hard bit), you write it down and turn it into a novel (the easy bit), the two of you can split the money fifty-fifty.

I'm reasonably gracious with these people. I tell them, truly, that I have far too many ideas for things as it is, and far too little time. And I wish them the best of luck.

The Ideas aren't the hard bit. They're a small component of the whole. Creating believable people who do more or less what you tell them to is much harder. And hardest by far is the process of simply sitting down and putting one word after another to construct whatever it is you're trying to build: making it interesting, making it new.

But still, it's the question people want to know. In my case, they also want to know if I get them from my dreams. (Answer: no. Dream logic isn't story logic. Transcribe a dream, and you'll see. Or better yet, tell someone an important dream - 'Well, I was in this house that was also my old school, and there was this nurse and she was really an old witch and then she went away but there was a leaf and I couldn't look at it and I knew if I touched it then something dreadful would happen...' - and watch their eyes glaze over.) And I don't give straight answers. Until recently.

My daughter Holly, who is seven years of age, persuaded me to come in to give a talk to her class. Her teacher was really enthusiastic ('The children have all been making their own books recently, so perhaps you could come along and tell them about being a professional writer. And lots of little stories. They like the stories.') and in I came.

They sat on the floor, I had a chair, fifty seven-year-old-eyes gazed up at me. 'When I was your age, people told me not to make things up,' I told them. 'These days, they give me money for it.' For twenty minutes I talked, then they asked questions.

And eventually one of them asked it.

'Where do you get your ideas?'

And I realized I owed them an answer. They weren't old enough to know any better. And it's a perfectly reasonable question, if you aren't asked it weekly.

This is what I told them:

You get ideas when you ask yourself simple questions. The most important of the questions is just, What if...?

(What if you woke up with wings? What if your sister turned into a mouse? What if you all found out that your teacher was planning to eat one of you at the end of term - but you didn't know who?)

Another important question is, If only...

(If only real life was like it is in Hollywood musicals. it only I could shrink myself small as a button. If only a ghost would do my homework.)

Those questions, and others like them, and the questions they, in their turn, pose ('Well, if cats used to rule the world, why don't they any more? And how do they feel about that?') are one of the places ideas come from.

An idea doesn't have to be a plot notion, just a place to begin creating. Plots often generate themselves when one begins to ask oneself questions about whatever the starting paint is.

All fiction is a process of imagining: whatever you write, in whatever genre or medium, your task is to make things up convincingly and interestingly, and new.

And when you've an idea - which is, after all, merely something to hold onto as you begin - what then?

Well, then you write. You put one word after another until its finished - whatever it is.

Sometimes it won't work, or not in the way you first imagined. Sometimes it doesn't work at all. Sometimes you throw it out and start again.

I remember, some years ago, coming up with a perfect idea for a Sandman story. It was about a succubus, who gave writers and artists and songwriters ideas, in exchange for some of their lives. I called it Sex and Violets.

It seemed a straightforward story, and it was only when I came to write it I discovered it was like trying to hold fine sand: every time I thought I'd got hold of it, it would trickle through my fingers and vanish.

I wrote at the time:

I've started this story twice, now, and got about half-way through it each time, only to watch it die on the screen.

Sandman is, occasionally a horror comic. But nothing I've written for it has ever gotten under my skin like this story I'm now going to have to wind up abandoning (with the deadline already a thing of the past). Probably because it cuts so close to home. It's the ideas - and the ability to put them down on paper, and turn them into stories, - that make me a writer. That mean I don't have to get up early in the morning and sit on a train with people I don't know, going to a job I despise.

My idea of hell is a blank sheet of paper. Or a blank screen. And me, staring at it, unable to think of a single thing worth saying, a single character that people could believe in, a single story that hasn't been told before.

Staring at a blank sheet of paper.

I wrote my way out of it, though. I got desperate (that's another flip and true answer I give to the where-do-you-get-your-ideas question. 'Desperation.' It's up there with 'Boredom' and 'Deadlines'. All these answers are true to a point,) and took my own terror, and the core idea, and crafted a story called Calliope, which explains, I think pretty definitively, where writers get their ideas from. It's in a book called Dream Country. You can read it if you like. And, somewhere in the writing of that story, I stopped being scared of the ideas going away.

Where do I get my ideas from?

I make them up.

Out of my head.