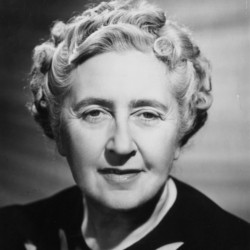 Agatha Christie was born in Torquay in 1890 and became, quite simply, the bestselling novelist in history.

Her first novel, The Mysterious Affair at Styles, written towards the end of the First World War, introduced us to Hercule Poirot, who was to become the most popular detective in crime fiction since Sherlock Holmes.

She is known throughout the world as the Queen of Crime. Her books have sold over a billion copies in the English language and another billion in over 100 foreign countries.

She is the author of 80 crime novels and short story collections, 19 plays and six novels under the name of Mary Westmacott.

She is regarded as the Queen of crime and mystery. She is also the most famous writer in the world after God (who wrote the Bible) and William Shakespeare I interviewed a month ago.

I am discussing about Agatha Christie, the second female novelist I met through an imaginary interview. During last months, indeed, I have mostly interviewed male famous novelists and I believe that a major room must be left to famous writer women, also.

For this likewise important reason, ladies and gentlemen, I interviewed for you, by disturbing her in the heaven, Mrs. Agatha Christie, the writer who invented  mystery and unforgettable detective  Hercule Poirot.

Rosalba: Mrs. Christie, I am very happy for this interview. I know you dislike publicity and gave few interviews in your life and for this, thank you so much for accepting to being interviewed by me.

Agatha Christie: I dislike publicity, it is true, but I like to meet foreign writers and reviewers like you, my dear Rosalba.

Rosalba: I read your biography and I know you used the last name of your husband in your novels, namely Christie. Which was your true name?

Agatha Christie: My former husband, you should say. But I’ll talk about this later. My true name was Agatha Mary Clarissa Miller. I was born on 15 September 1890 in Torquay, Devon, South West England.

Rosalba: Hence, you are a perfect British writer and a native speaker! Now, I hope you’ll correct my mistakes in English.

Agatha Christie: It will always be a pleasure for me. To tell the truth, I feel to be a French speaker, too.

Rosalba: And why do you feel this?

Agatha Christie: When I was five years, my family spent some times in France, where they rented a house with a French governess, Marie. I learned my erratic French, thanks to her.

Rosalba: Is true that your parents would prevent you to learn reading and writing until you were eight years old?

Agatha Christie: yes, it is damned true. But I got my revenge in my life: first because I learnt at five years, thanks to my siblings who helped me to read secretly from our parents and second because I became a novelist!

Rosalba: Why did you choose to write by using the surname of your husband?

Agatha Christie: Although I was born in a wealthy middle class family, during the previous years the first world war, my mother relocated in Egypt with me and my siblings. They left in 1910 after my father’s death for a chain of deadly heart attacks.

There , in 1912, I met my first husband Archie Christie, a qualified aviator who had applied to join the Royal Flying Corps. The first world war, however, separated us, him in France and me in my hometown (Torquay) to work as a voluntary nurse at a war hospital. They were the years that helped me write my first crime stories. In 1916, I wrote, indeed, my debut novel The Mysterious Affair At Styles .

The main character was detective Hercule Poirot. I used the surname of my first husband because I was married to him when I wrote my debut novel that would make me very famous later. I can only say I left this surname as a talisman and then because easier to use for my publishers.

Rosalba: I know you debuted very soon and before writing your first mystery with Hercule Poirot.

Agatha Christie: yes, I started writing my stories at 18 years old. Furthermore, you must know my mother was a good storyteller and a passionate writer and, obviously, I became a passionate writer, as well. Mine were short stories that were published revised only in the 1930s.

Rosalba: How long did you take to find a publisher for your first novel?

Agatha Christie: Much time. I took much time to write and later to find a publisher. My debut novel was published at the end of the war when my husband reached me in England and I sent my manuscript to four publishers.

The fourth, John Lane of The Bodley Head accepted my manuscript and insisting to make some changes, hired me for other five books. He also proposed me to set the conclusion of my mystery in a library.

Then, other famous novels followed such as The Secret Adversary and The Man in the Brown Suit. Since my publisher offered me unfair terms to release the books, I decided to find a literary agent who found a new publisher: William Collins and Sons, namely HarperCollins.

Rosalba: You also wrote very exotic mystery novels, the most famous are also set in the Middle East, such as the unforgettable Murder on the Orient Express, Death on the Nile, Murder in Mesopotamia and Appointment with Death. Where have you found the inspiration for these novels?

Agatha Christie: In my life, my greatest ambition was to travel on the Orient Express. I had the opportunity to travel on this charming train in 1928.

Thanks to this journey, I went to visit the archaeological area in Baghdad and I met archaeologist Max Mallowan who became my second husband.

On the train, we loved talking very much and just for these wonderful trips on this marvellous vehicle I got the inspiration to write my novels.

Rosalba: Where you got the inspiration to create the character of Hercule Poirot?

Agatha Christie: First of all, from my childhood in France and then from my experience as a nurse at the war hospital during the first world war. During the war, there were Belgian refugees in most parts of the English countryside, Torquay is no exception.

Although Poirot was not based on any particular person, I thought that this Belgian refugee, a former great Belgian policeman, could become a perfect detective for my stories. Moreover, as a nurse, I learnt to use many poisons and this is another reason that inspired me to write crime novels.

Rosalba: What advice would you like to give to modern and aspiring writers?

Agatha Christie: I believe tips and suggestions are evergreen and without time. I can suggest the one I was told by author and family friend Eden Philpotts when I started writing:

“The artist is only the glass through which we see nature, and the clearer and more absolutely pure that glass, so much the more perfect picture we can see through it. Never intrude yourself.”

Rosalba: How did you write your novels?

Agatha Christie: I always wrote stories about things I knew, namely my life, my experience, the places and the people I met. Sometimes, to sketch a story in my block notes it was sufficient a talk, a discussion or opinions I heard at a dinner party, for instance. My grandson always described me as a person who listened more than she talked, who saw more than she was seen.”

Another my fictional characher, for instance,  Miss Marple ,  was based on the description of my elderly aunt.  Plots come to me at such odd moments, when I am walking along the street, or examining a hat shop…Suddenly a splendid idea comes into my head”. I wrote always by hand and then I dictated my written words to a secretary who typed with a machine called Dictaphone.

Rosalba: Yes, you were a great novelist and rewarded with a great career. What do you feel to say at this moment?

Agatha Christie: What can I say now? Thank God for my good life, and for all the love that has been given to me. I wish the same to my colleagues.

Please also see my translation sample into Italian of Evil Under the Sun, another famous  Hercule Poirot mystery by Agatha Christie.