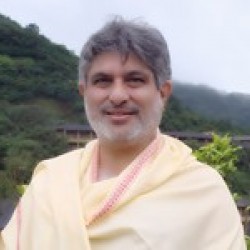 Guruji Naushir was a successful professional till he met with three mystic sages between 1998 and 2003. This changed his life completely and propelled him towards an intense journey ‘within’. From that seeking came answers to a human being’s deep rooted suffering and miseries.

At the same time in the year 2000 he started receiving written communication from Mahavtar Babaji, the deathless sage of the Himalayas. Since then Babaji became his constant source of knowledge and guidance. This culminated in 2010 with Guruji Naushir going to the wilderness of the Himalayas and being granted the rarest of rare gifts. A personal audience with Mahavtar Babaji.

Guruji Naushir is the founder of Mahavtar Babaji Tadekam Foundation, an organization dedicated to guiding human beings to rise from suffering to solution and from ignorance to enlightenment.