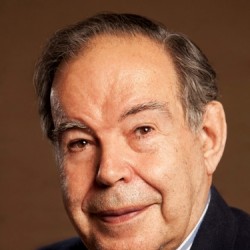 Edward de Bono invented the concept of lateral thinking. A world-renowned writer and philosopher, he is the leading authority in the field of creative thinking and the direct teaching of thinking as a skill.

Dr de Bono has written more than 60 books, in 40 languages, with people now teaching his methods worldwide. He has chaired a special summit of Nobel Prize laureates, and been hailed as one of the 250 people who have contributed most to mankind.

Arguably Malta’s most famous person, Dr. Edward de Bono is the world's leading authority on conceptual thinking as the driver of organisational innovation, strategic leadership, individual creativity, and problem solving. From the Six Thinking Hats tool to lateral thinking – a term he coined – his work has revolutionised the way people approach problems across the world. Now in his eighth decade, he shows no sign of slowing down;. He met with The Report Company to explain what his methods have to offer to an emerging giant such as China, and to discuss his new projects in Malta.

The Report Company: To what extent do you feel your work could have an impact in China?

Professor Edward de Bono: There’s been a lot of interest in China in my work.. The Chinese are very interested in my work because they know that they need creativity.. They realise that they need creativity and they realise that my approach fits a lot more with their thinking rather than just being mad and off the wall and so on. de Bono China http://www.debonochina.com/China are the authorised representatives of my training methods in China. They conduct seminars and workshops and train businesses in my work.

TRC: How does your approach work?

EDB: Mine is a structured approach based on logical patterning systems. My background is in medicine and once you realise the brain is a patterning system then you see that there’s an absolute need for creativity.

A lot of our thinking is what I call caveman thinking. Then, when something not standard crops up, no one knows what to do. We have never actually created thinking for generating value. It’s a huge deficiency in thinking. There’s a logical need for creativity to get to points which our existing patterns don’t get us.

People tend to use thinking to find the truth. Imagine a person in a kitchen and all the ingredients are top-quality ingredients but he doesn’t know how to cook. Finding the truth is fine but unless you can put things together to find value, it’s not enough.

Worldwide I think there’s a real need for better thinking. In most universities, the emphasis is on analysis. What does analysis do? It merely identifies a standard situation to which you apply a standard solution, like a doctor in a clinic diagnosing diabetes.

“Mine is a structured approach based on logical patterning systems. My background is in medicine and once you realise the brain is a patterning system then you see that there’s an absolute need for creativity.”

TRC: You are launching a Palace of Thinking in Malta. What made you choose Malta rather than another country?

EDB: One of the points about setting up my Palace of Thinking in Malta is that if I were to set it up in the US or Germany or England, it would be seen to reflect the political views of that country. Being a small neutral country without any political or military power, Malta can be seen to be independent. The motto would be that from the oldest civilisation, which Malta is technically, come the newest ideas. This Palace of Thinking is there to generate and create ideas for everyone.

TRC: What are the expectations for this Palace of Thinking?

EDB: The expectations are that we will produce from time to time new ideas and possible solutions which will be published; it can receive ideas from people who have ideas, it can organise conferences specifically to generate ideas, so once it gets known it’ll be the place in the world for receiving ideas and publishing ideas. The idea is to create a simple structured channel.

TRC: What are you working on right now?

EDB: As well as the Palace of Thinking, I’m working on my latest book, which is about thinking to create value. It is written and finished but not yet published. It’s surprising to me that no-one else is talking about these big deficiencies of human thinking. It’s not philosophy; philosophy is playing circular games. It’s about practical thinking and that’s why I work with business, which shows more interest in thinking than other areas of society. My Six Hats method is the first change away from argument in 2,400 years. We are very complacent about our thinking, which is not as wonderful as we believe.

“People tend to use thinking to find the truth. Imagine a person in a kitchen and all the ingredients are top-quality ingredients but he doesn’t know how to cook. Finding the truth is fine but unless you can put things together to find value, it’s not enough.”

TRC: How can Malta innovate to become more successful?

EDB: I think there are many areas. Obviously, things like new concepts such as the Smart City idea, but Malta can look at other ways of doing things differently.

TRC: How do you think creative thinking can be encouraged in Malta?

EDB: In 1992 I collaborated with the university of Malta to set up The Edward de Bono Institute for the Design and Development of Thinking. The institute offers a wide variety of courses and events based on my work and interelated subjects. They have been instrumental in making my creative thinking methodologies available at the University level. This means that those emerging from university having been exposed to important tools to help them to think creatively - on their feet. This has to have a powerful flow on effect as they move throughout their working and everyday lives, playing a role in shaping the future in Malta and internationally.

The Maltese distributor of my teaching methods, Donna Pace of DP & Associates works with businesses throughout Malta to apply my tools and methodologies to drive organisational innovation and business solutions.

In the past, I have had in the past meetings with various ministers of education to have my work taught in Maltese schools. I don’t know what the present situation is; it sort of comes and goes, but I would like to see thinking taught in all schools as formally as mathematics is taught. Thinking is as important if not more important as mathematics because it deals with everything.

It’s not actually very well-known that I am Maltese because I usually speak English, but I would say in history I’m probably one of the best-known Maltese internationally. I’ve published 70+ books in 42 countries.

EDB: Unfortunately, Anyone talking about thinking gets shunted into philosophy or psychology, not into the process of thinking itself. Lateral thinking is based on the logic of patterning systems, so there’s random entry. In a patterning system you follow a route. In a patterning system you can be blocked by openness. That sounds totally contradictory, but imagine you drive to work along the same road every day and it has a lot of traffic blocking the way so you have to take a side road. On the day there is no traffic and the main road is clear, you are therefore blocked from taking any side road. As we go in our minds from A to B, we are blocked from going to C.

I still think in many cases it’s still something new. It’s still pioneering and when thinking is taught in every school worldwide then I can say my goal has been achieved. Interestingly, business has been more interested in thinking than any other sector of society. In business you need thinking to be successful, to make money. In politics, it’s proving that you’re wrong or right. It’s not value creation at all.

TRC: What are your plans for the future?

EDB: I’m going to stop travelling so much.