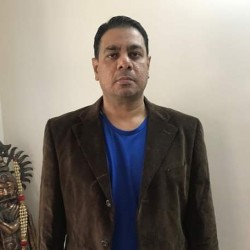 Mallikarjun B. Mulimani is a young electronics and communication engineer turned writer. He initially wrote poems; later took up to writing short stories, novellas, and novels. So far, he has contributed to seven books viz.

‘Abstractions’, ‘Buddha in a Mercedes’, ‘The Holy Plumber and Other Stories’, ‘Operation Epiphany - God’s Journey on Earth’, ‘Victims Incorporated-Circles of Sub-consciousness’, ‘Dams Across the Flow’ and ‘What Happened to my Creativity?’

Four of these books have been published by Writers Workshop, Kolkata, one by S. Chand & Company LTD. New Delhi, another by Current Publications, Agra, and the remaining one was self-published by CreateSpace. The author’s style is one in which he feels that brevity is of the essence. In his work, the author wrestles with the aspects of life, love, death, God, religion, sex, and other serious issues.

The author touches upon the metaphysical side of all the above-mentioned issues whenever he deals with them in his work. He is a serious writer, who also has a very subtle sarcastic wit about him. Even though he is still young, many eminent persons including the late Prof. U. R. Ananthamurthy have appreciated him.

All Mallikarjun B. Mulimani's Books