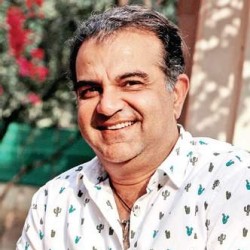 Vish Dhamija, a crime fiction writer, was born and brought up in Ajmer, Rajasthan. A commerce graduate, with an management degree from Manchester Business School, Dhamija, after a career in the corporate world, took to writing with the 2010 publication of Nothing Last Forever, a crime thriller, establishing him as a writer.

When are you planning for your next book?

The next book is in the DCP Rita Ferreira series. Titled Lipstick, it’s a story of serial killer and hence, it is dark, probably even darker than Bhendi Bazaar.

It is due to release in the third quarter of 2019. The previous two Rita Ferreira thrillers (Bhendi Bazaar and Doors) will be re-launched in 2019 too, so it’s a busy year ahead.

What are your interests other than writing?

What inspires you in life?

If you look beyond the surface, everything in this world can be inspiring. Notwithstanding the fact that the world looks at cacti as a thorny plant that grows in a barren desert, it flowers.

Some of the cacti juices are now being promoted as healthy. So while art, music, books, films and people usually inspire me, there are a lot of other inane and everyday items that inspire me.

Out of all your books, which is your favorite?

I’ve been asked this before, and I’ve been ambiguous, I do have a favorite one—to be honest—but I’ll reveal when the time is right J.

How often do you write?

I write whenever I can. That’s the best part about writing—one does not have to stick to a schedule. Some days I write for four/five hours, other days I don’t go near a computer. However, I make notes on my iPhone all the time, which help me organize my thoughts.

6: Do you have a set schedule for writing, or are you one of those who write only when they feel inspired?

There is no set schedule, but I prefer to write in the mornings. These past few months, I generally go to a café behind our house—the staff there is very friendly, they serve brilliant cappuccinos, and they’ve given me access to their Wi-Fi—put on my headphones and write for a few hours.

Somehow, the environment in the café, seeing people go on with their lives is more inspiring than sitting in a closed room with no one around.

What other genres do you enjoy reading?

I’ve read a few autobiographies but I wouldn’t say I really enjoy reading them. I do, however, enjoy reading comics. I read the entire set of Tinting comics every year.

Which of your novels best describes you as a person?

None is the right answer. None of the characters in my novels is autobiographical, and although they say never say never, I don’t think any of them will ever be.

Have you ever written a character based on the real you in some part?

No. There might be some of my hobbies that surface in novels, like golfing or a reflection of my taste in music, but they are merely superficial similarities.

Can you tell us about your current projects?

I’m currently writing Cold Justice, which has the same cast as Unlawful Justice. The story continues after Akash Ingrain won the initial case, so it can also be called a sequel. The working title is Cold Justice, and it’s a legal thriller.

If you were to change your genre, which one would you choose?

Honestly, I have so many plots for crime fiction in my head at the moment that the thought of changing genre hasn’t even crossed my mind. That’s not to say I may never write in another genre, but at the moment I have no idea what it would be.

I read it somewhere that “success is not happiness; happiness is success”, and I believe in it. I will write as long as it makes me happy—success or failure is at best temporary.

As an author (like in all other creative fields) you are only as good as your last book, and that too is subjective since you can never get the entire world to like (or dislike) a particular book. So I focus on what makes me happy, I focus on the next story because writing makes me happy.