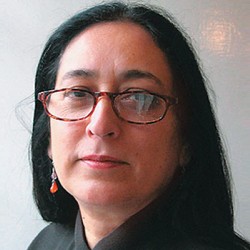 Nasreen Munni Kabir on the art of interviewing: ‘Don’t be a fan; never be bigger than your subject’

How to get film personalities to open up about their lives: hot tips from the author of numerous conversation books.

Nasreen Munni Kabir has been conducting interviews in various formats since 1983, when she organised screenings of Indian film classics at the Pompidou Centre in Paris and later across Europe. These screenings were preceded by interviews to glean information about the movies. The exercise led to the Channel 4 series Movie Mahal in ’86 and ’87, with each of the 46 episodes dedicated to profiling a Hindi film personality.

More interviews followed in the documentaries In Search of Guru Dutt and The Inner and Outer World of Shah Rukh Khan and Kabir’s series of books, starting in 2002 with Talking Films: Conversations on Hindi Cinema with Javed Akhtar. Apart from a second discussion with Akhtar on Hindi film lyrics in 2007, Kabir also has to her credit book-length interviews with Lata Mangeshkar, AR Rahman, Gulzar and Waheeda Rehman. Her most recent effort, Zakir Husain: A Life in Music, was released in January.

A bulk of Kabir’s professional life has been spent on asking, listening, teasing out details and conducting research. In an interview, she shares her thoughts on the art and craft of interviewing: “If you have observations and insights of people and how they work, you can get a good dialogue going.”

You started your interviews at a time when there was very little information about Hindi cinema in the public domain.

In the 1980s, there were virtually no books on Hindi cinema, no YouTube, no way of finding out much about a person except for film magazines.

So I did a lot of work with the actual material. I used to go to Poona where Mr PK Nair, the founder and director of the National Film Archive of India, was instrumental in making me think about cinema. He was fabulous on the detail. You would say to him, I need that song Chahe Koi Mujhe from Junglee, and he would immediately rattle off, that’s reel number 12. When you are in the company of people like him, you aspire to have some degree of knowledge.

So what I did do was look at the films carefully and ask the filmmakers and actors questions that would take them back to the film, the scene, the detail.

I will give you the example of Shammi Kapoor. There was very little written about Shammi Kapoor except for a few interviews. I noticed in his films, and in particular his songs, that they are cut in a particular way. On the beat, you will get a shot of Shammi Kapoor kind of flopping out of the frame. When I asked Shammi ji during the interview, where was the cut or the shot or how did it take place, he explained that he would jump out of the frame on the musical beat. The fact that I asked him that excited him, because I appeared to have an observation of his work.

How did the first book, ‘Talking Films: Conversations on Hindi Cinema with Javed Akhtar’, come about?

My first conversation book came out of a conversation. A friend of mine, Rukun Advani, the respected writer and publisher, was at Oxford University Press in those days. He said to me, why don’t you make this the format of a book? I didn’t believe it would work, that it would be a book rather than an article.

I did the first book, and it seemed to work very well. I was still making documentaries while the books were happening. Both fed into each other in terms of information and understanding.

Are there personalities you wish you had interviewed?

Unfortunately, the writing on Indian cinema has come very late. About the golden era – the ’50s and ’60s – there is virtually nothing. You can’t find a single in-depth interview of Mehboob Khan or Bimal Roy or Guru Dutt.

The horse had bolted by the time I got onto the scene. The best people who could have told you so much had already passed on, like SD Burman and Sahir Ludhianvi. But you cannot give up even before you try.

When I started, there were still some people around, but I didn’t have the wit to interview them. I missed three books of conversation that I deeply regret I didn’t pursue: Majrooh Sultanpuri, Vijay Anand and Raj Khosla.

How do you distinguish between journalistic interviews and conversations conducted for a book?

The primary aim or ambition of an interview in a newspaper is the here and now. The reader doesn’t expect it to be a biography. The conversation book should not be about the here and now, because if you do that, the book itself will have no shelf life. You have to make it an overview of that person.

If you do a conversation book over time, you get more time, literally, to reflect on what that person is saying so that you can layer it. The conversation books that I have been doing are over a year, in some cases, three years. Rahman was over three years because of stops and starts.

How does a conversation book typically begin and then proceed for you?

First, you persuade the person to agree. They will say, what is a conversation book? If you have a book on those lines, it helps. If not, you say, let’s be freeflowing about it and then we will structure it together.

When people talk, they can say lots of things and not necessarily remember things correctly. So you have to fact check. You have to be as thorough as possible.

My silent partner in these books is a woman called Shonali who lives in Bombay. I send her the audio files, she types them quickly and sends them back to me. That saves me a lot of time. I will edit every single day, because I want the editing and the conversation to stay alive. I can also see where the holes are. At the very end, I edit for style.

One of the biggest challenges is to get people to open up about their work and their lives. How do you do it?

I have been fortunate. I notice detail, psychological detail. Some people use certain words many times. They might tell you, ‘You do understand how it is.’ You realise that they don’t believe that the person they are talking to understands what they are saying. So then you are much more alert.

How do you get non-cliched answers from somebody who could be in a position of giving ten interviews a day? By asking them something that they haven’t noticed about their work. It is the surprise that makes people interested in talking. Sometimes, you might ask ten questions, but two questions should take them aback. Otherwise you have no new information.

Before the interview, it is good to spend a little time with them so that they know the parameters of the discussion.

I did not know everybody I met or interviewed very well. But I did have a sense of the period in which they worked. I had a sense of who they were talking about. If you know their world, they don’t feel that they need to explain the basics.

Who were the easiest to interview, and the toughest?

The easiest person was Javed saab because his answers were so brilliant that you had a very entertaining conversation. The person who was very insightful was Lata ji. She was extraordinary, her memory was extraordinary.

The one who was much more reluctant than he is now is AR Rahman. Rahman would hardly finish a sentence or say things in very short sentences. Now, he has no issues about opening up.

Because I had been trained in filmmaking, I didn’t come as a journalist or a film critic but as a practitioner. Once they know that you know your field, you get a better relationship.

One of the big problems is if the person gets defensive. If they start thinking they have to defend their position and their films, then you’re in trouble. But frankly, the people whose work I didn’t like or appreciate, I didn’t go to.

What are the aspects you ensure as well as avoid during your conversations?

I am not there to probe. I am definitely there to record their history and to record incidents in their lives that led to the making of an iconic song or movie.

I have never thought myself bigger than the subject. I am not a fan. I like to be an equal, and I feel I am in my own way, but I am never bigger than them. They are doing me a favour by allowing me into their lives. I must remember that. I am there because I like their work. So the relationship is primarily objective.

Many times people say, your books are very interesting, but there is no gossip. I wouldn’t be allowed through the door if I started that line of inquiry. Plus, I do believe I wouldn’t like anybody to ask me those questions. I like Waheeda ji or Gulzar saab because of their way of thinking. What they do in their private life may matter in terms of their behaviour, but in fact, what matters, and what will remain, is their work.

When you’re interviewing somebody, you’re in the position of three other people – journalist, policeman and doctor. These three can ask anything and get away with it. In a superficial way, the interviewer for a book or a documentary is sometimes doing what the shrink would do. The shrink may not involve his own story in the exchange. The space is for the subject. You have to know how to respect that space. You cannot be too familiar with the subject, like a shrink.

What place does the conversation book have in an age of information overload, blanket coverage of Hindi cinema in the media, and celebrity chat shows?

In the 1980s, there weren’t so many television channels, magazines and newspapers writing on Hindi cinema. There wasn’t a mass inquiry and mass pressure on film practitioners to be interviewed.

Today, everybody is feeding on celebrity status and the industry. There is an overload, an amassing of information about the here and now. I don’t see much analysis or self-awareness. There is a deadening effect of the stars today, and not because it’s their fault. It’s because they are everywhere, and the press has become obsessed by them.