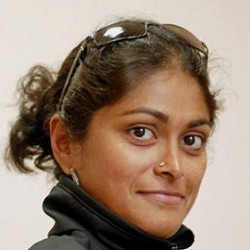 Anuradha "Anu" Vaidyanathan (born 1983 or 1984) is an Indian writer, entrepreneur and triathlete.

Vaidyanathan's first book, the memoir Anywhere But Home – Adventures in Endurance, was published by Harper Collins in 2016, to positive reviews.[

“The idea is to quit complaining and get the job done.” – Anu Vaidyanathan, Triathlete, Entrepreneur, Academic Extraordinaire.

Anu Vaidyanathan, at 32, sets one of the best examples in the recent times of the what the human potential is capable of and how it can be stretched beyond limits in order to achieve the best version of oneself.

She has been in the long-course triathlon scene  in India since the past few years and qualified for the Half Ironman 70.3 Clearwater World Championship in 2008. In 2009, she became the first and only woman to finish the well-renowned Ultraman Canada event  and went on to complete the Ironman Canada exactly three weeks later.

Apart from being an athlete, she is also the founder and CEO of Pathmark’s, which offers value added services in the field of intellectual property and has been a visiting faculty alit Ropar in the Department of Computer Sciences and IIM Ahmadabad. She also has a PhD in Electrical Engineering from University of Canterbury, which she completed in the record time of 26 months apart from a Bachelor’s and Masters in computer Science.

We engaged her in a little chat about her life and how she balances being a sports enthusiast, entrepreneur and academic extraordinaire simultaneously. Read on. : )When did you decide to compete for long course triathlons and what inspired you to do so?

I think the inspiration came from a combination of moving back to Bangalore, after a few years in the US, being interested in keeping my waistline at bay, being incredibly pissed with the bad traffic and general lack of healthy options for women who wanted to keep some semblance of sport alive in their lives – and of course, the huge element of adventure!

Going by the current situation of the education system in the country, getting into the IITs and B-schools is considered more prestigious than exploring other career fields, such as sports for example. What’s your take on this?

I agree that this perception exists and is crippling. I have met several bright students from NITs and other 2nd and 3rd tier colleges as far as Engineering goes. As far as exploring other career options goes, I think the scene is definitely changing with a host of opportunities opening up for the creatively inclined.

Of course, this is a direct function of the wealth of a nation and as we are getting wealthier, I believe that its not that hopeless. There is still a lot of interest and sustainable career paths outside of engineering and medicine. What is Pathmark’s all about? Tell us more about the services it provides and it’s future prospects?

Pathmark’s is an Intellectual Property Consulting firm with offices in Austin, Bangalore and Chennai. Having started Pathmark’s right out of college as a fledgling start-up, I have modeled the long-term vision at Pathmark’s to provide cost-effective advice and a high standard of deliverables.

We pretty much help all tiers of companies, from students to academics to start-ups to medium and large companies in identifying, filing and prosecuting all aspects of ‘Intellectual Property’.

I believe that in the long term, it is important to create value for clients by catering to their needs, striving to enable a world-class service and also have the balls to tell people when certain aspects of IP will NOT work, rather than running after the last rupee to be earned. Being a second-generation practitioner gives me this freedom. We are very selective in the clients we work with and strongly believe in quality over quantity.

Additionally, in 2014, we are very proud to announce the start of the Pathmark’s Foundation Scholarship program, identifying high-potential students and social entrepreneurs and providing them with pro bono IP services.

The students own their IP at the end of the day and our interest is in getting them started in protecting their ideas, so that they can later convert these into meaningful competitive advantages.

Well-known Athlete, guest faculty at IIT & IIM, having your own company and academic interests ranging from Applied Engineering to IP policy. How do you manage to keep up with so many roles? I keep things very simple, prioritize and generally avoid people who wouldn’t be adding any value to my life and endeavors. I am also very lucky to have a supportive family and spouse that really understand what makes me tick.

I see many people running against the tide all too often. There is no revolution to be won with personal endeavors. Do it or don’t do it, its all up to you.

What challenges did you face while being on the journey to be Asia’s only woman to complete the Ultraman alongside being academically successful? Plenty! I only remember overcoming those challenges to get to the finish line – it was a sweet feeling.

To be very honest, everyone has challenges. From the richest to the poorest, tallest to the shortest, smartest to the not-so-smartest. The idea is to quit complaining and get the job Donemana Vaidyanathan is a 2012 INK Fellow.

Every year, INK identifies a fresh batch of multidisciplinary young trailblazers who they believe will be the change-makers of tomorrow. You can listen to her INKTALK here.