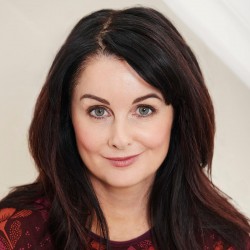 Marian Keyes (born 10 September 1963) is an Irish novelist and non-fiction writer, best known for her work in women's literature.

She is an Irish Book Awards winner. Over 22 million copies of her novels have been sold worldwide and her books have been translated into 32 languages.

She became known worldwide for Watermelon, Lucy Sullivan is Getting Married, and This Charming Man, with themes including domestic violence and alcoholism.

With 22 million copies of her books sold worldwide and two Irish Book Awards under her belt, Marian Keyes is one of the most successful Irish authors in the world.

Born in Limerick and raised in Monkstown in Ireland, Marian completed a law degree at Dublin University, before moving to London in 1986.

Her first novel, Watermelon, was published in 1995, while Marian was working full time at an accounts office. She got the publishing deal after sending a collection of short stories to a publisher and telling them she’d started writing a novel, which wasn’t entirely true.

When the publishers said they wanted to see the novel, Marian wrote four chapters in a week. This earned her a three-book contract, which is testament to her skill as a writer.

Marian’s books are always funny and heart-warming, but often deal with difficult issues, such as addiction and mental illness – topics Marian has been open and honest about her own experiences with.

To celebrate St Patrick’s Day, we had a chat with Marian about the importance of Ireland to her writing, as well as how disability is represented in literature and what blind and partially sighted people can do if they want to follow in her success.

RNIB: Who are your favourite Irish authors?

Marian Keyes: I couldn’t say, because I know so many, I’m friends with so many. So, if I say 6 or 7, I worry then about the people I haven’t mentioned.

All I can say is that there’s real support amongst the Irish authors, and it’s genuine. We’re all pretty much friends, which is a very nice kind of way to live. Even though there’s lots of different genres that we write in, we’re very supportive of each other. I couldn’t possibly mention some, because there are so many that I like. I’m sorry about that.

RNIB: Your books are always seeped in Irishness, if that’s a word.

MK: They are. I write as an Irish person, my characters are almost always Irish. So I write with the kind of Irish idiom, Irish slang, and the rhythms of my sentences are very Irish. Irish people speak English and write English according to a different rhythm, because we used to speak a different language.

So even now, although our words are English, the sentence structure often belongs to the older language, which I think just makes things more interesting, more colorful, more unexpected. There are many ways to convey the same information and I think Irish people can do it in a very entertaining and beautiful way.

RNIB: Some of your characters aren’t Irish, but do you see yourself ever writing a whole book about non-Irish characters?

MK: I don’t think so anymore, because I think I’ve learnt that, even though my books are, as you say, seeped in Irishness, that all stories are universal. All human beings are pretty much the same, I think, fundamentally we want the same things.

Most stories can be lifted from one setting and can function just as well in another. So, no, I’m more comfortable writing with the history of an Irish character, and I suppose I’m happy now to think that my books will travel and that people in different counties will read them and identify, even though the setting isn’t local to them.

RNIB: Another thing about your books is that they are always hilarious, really funny, but they often deal with difficult subjects, like addiction and mental illness. Do you think these issues should be better and more broadly represented in literature?

MK: I do, yes. Especially things like mental illness and addiction. I mean, nothing’s served by keeping them secret. They’re conditions that can’t be helped, you know. These aren’t moral failings, and I think there used to be the opinion that they were, and some people still think that they are.

But they’re absolutely not - they’re illnesses, or they’re conditions that are the same as physical illnesses. So, definitely the more that’s written about them and the more that they’re sort of normalized through commercial fiction or popular fiction, the less shame and secrecy that’s attached to them.

And even to write about rape or domestic violence in fiction is a really good way of reaching people. Rather than just non-fiction facts being delivered, if an issue can be explored via fiction, it can scoop up a lot more people, it can open the minds of a lot more people. So, yes, definitely, I do think that the more the better.

RNIB: Also, your descriptions of mental illness can help people who are dealing with the same experiences feel less alone.

MK: Yes, there’s something very comforting to find out that what you though was a fault unique to you isn’t a fault at all, it’s something that’s been felt by other people, there’s a great comfort in it.

RNIB: Similarly, do you think characters with disabilities, like sight loss, should be better represented?

MK: Absolutely, of course. I don’t know anybody who has trouble with their sight, and I think it must be really shocking and really hard to deal with, and I think that people are afraid of things they don’t know about. So, definitely, if it was written more about in fiction, people would be more empathetic, they’d get it more.

RNIB: Do you think talking about these difficult topics is even more important in books for children and young adults?

MK: I do. Children’s minds are very open and I think if they learn things at a very young age, it just seems normal to them. I think if things are hidden from them and done in a big reveal when they’re 12 or whatever, that it always seems a bit ‘other’. Definitely the younger the better. Because these are the realities of our world, and children are far more resilient than we realize, than we give them credit for.

MK: I don’t think of it being spoken out loud, because the only way I can write is to kind of pretend that nobody other than me will ever see it. It’s the only way I can be honest. For me, if I think of any particular person reading it, it will corral me, it will scare me, it will limit me. Because in some way I’m prejudging. So, no, I don’t, is the short answer.

RNIB: Would you ever consider narrating your own books?

MK: I did one – Under the Duvet, but it took me so long, even though it’s a tiny book. And it’s utterly exhausting. I’m not an actor – I wasn’t the right person to do the voices and the tones and everything. But I’ve done it once, and once was enough to let me know that I’m no good at it, and there are people who are far better than me who do a great job with it.

RNIB: You interact with your audience a lot on social media. Do any of the people who you talk to ever inspire characters in your books or find their way into your writing?

MK: I’m not aware of any yet. But the thing is, everything for a writer is information, everything goes into that kind of invisible database in the brain. So, I couldn’t give any solid examples. But I suppose in another way, Twitter for me is all about the Craic, it’s all about having fun. So I never really think of it that way. I let off steam on Twitter, it’s my downtime – it’s not work at all I use it for.

RNIB: You hate the term Chick Lit, quite rightfully. But publishers do need to market a book and package it somehow. How do you think that can work better?

MK: It is such a demeaning term. It could be ‘women’s fiction’, but there are men who write and read ‘chick lit’. I don’t know what to suggest – publishers and bookshops need to have shorthand to categories different genres, but I wish there was a better word, because it is particularly infantilising, I think.

I love David Nicholls – I’ve met him and he’s a really nice man, so I’m not saying anything to be mean, but David Nicholls was long-listed for the Man Booker – there’s no way he would have been if he was a woman. This isn’t sour grapes on my part, it’s a simple fact.

RNIB: Is there a book that you’ve read that you wish you’d written?

MK: So many, oh my god, millions and millions. I mean, there are people whose books I know I would never be able to write, like the Pakistani writer Mohsin Hamid.

I saw him on Tuesday night – he wrote The Reluctant Fundamentalist, Moth Smoke and How to Get Filthy Rich in Rising Asia, and he’s got a new book out now. I just think he’s so fabulously clever.

Millions of times I’ve read books and kind of gone into a slump afterwards, knowing that I will never be able to, but he’s the one that’s in my mind at the moment.

RNIB: Finally, what advice would you give to blind and partially sighted people who want to be authors?

MK: The same advice that I would give anyone – read as much as you can. It’s a great grounding in how to structure a novel, and it also gives you almost an instinctive sense of when something is good and when it isn’t. Then, once you’ve decided that you really want to write a book, simply sit down and do it.

People hate when I say that, because people think that there’s some sort of magic formula that published authors know that they keep secret from other people. But it’s simply a question of sitting down and putting one word in front of the other.

When I started I had a full-time job, so I used to come into work an hour early and write for an hour before I started my day job, and then in the evening I’d edit. So it meant that I had to get up an hour earlier, and sometimes I used to go to the gym before work, so I had to stop that.

So if somebody wants to write and they’re serious about it, I think they need to face the fact that sacrifices have to be made – the time has to come from somewhere.

Some sort of commitment must be made, it’s no point thinking that you can sort of fit your book in in the gaps of your life, because it doesn’t happen like that. You’ve got to carve out the time.

Another thing I would say is don’t try and be like anyone else, even if you really love somebody. It’s very important that you find your own voice and write in that, rather than thinking you’d be the next JoJo Moyes, for example.

We already have a JoJo Moyes – be yourself. Everyone has a unique voice, and it’s the uniqueness that is the most attractive in anything. And write for the love of writing, not for the hope of being published.