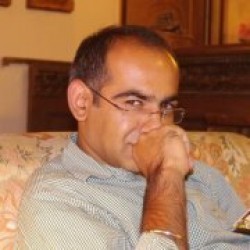 Based out of Rainhat, he is now a struggling entrepreneur and a happy writer. A self-proclaimed eccentric, he is an avid blogger who loves to read and cook.

Cooking stories, however, is his passion. The Homing Pigeons is his debut novel. --Este text se referee a la edition

Meet one of the most impressive debuts in Indian English Literature of 2013 – Sid Bahri’s ‘The Homing Pigeons’.

In the middle of the catastrophic 2008 recession, Aditya, a jobless, penniless man meets an attractive stranger in a bar. Little does he know that his life will change forever.

When Radhika, a young, rich widow, marries off her stepdaughter, little does she know that the freedom she has yearned for is not exactly how she had envisioned it…

…The Homing Pigeons is the story of love between these two unsuspecting characters as it is of lust, greed, separations, prejudices and crumbling spines.

Now that almost all of you have read the book, it is time to celebrate its success with the prolific author Sid Bahri. First things, read my review here, followed by the interview.

Congratulations on the overwhelming success of The Homing Pigeons. Did you expect such huge response for your debut venture?

Thank you, Priyanka. The ride for The Homing Pigeons has been fairly bumpy. It was written by night while I was working a day job. When all those nights of labor ran into rejections, I was almost beginning to lose confidence. Yet, most people who’ve read it have liked it.

I’d be lying if I said that I expected the book to be a dud but I wasn’t expecting this overwhelming response either. All in all, it’s a good start that I hope to build on.

Aditya and Radhika belong to a new breed of protagonists, much unlike the ideal hero and heroine. What made you break the formula and sketch characters most people would not dream falling in love with?

You are right when you say that Aditya and Radhika aren’t perfect protagonists. You can’t blame me for not creating perfectly relatable characters though. My intention was to create characters that live amongst us.

They come from middle class backgrounds. They are faced with dilemmas and they choose the path that they felt was right. It doesn’t mean that the path they chose was the morally correct path but for them, at those critical junctures, it felt right.

I’m not sure if they aren’t lovable people though. I’ll use the lines from my next novel to elucidate that point “Structurally, a moth and a butterfly are the same. They both have wings and I hear that they come from the same family.

It’s just that one is beautiful, has spots and stripes and the other is plain and ordinary. Yet, in our minds we love one and abhor the other. We’re all flawed like the moth. It’s just that some of us have money, beauty or fame to color our wings. It’s taken me a while to realize that moths are also beautiful.”

You have set the story in Delhi and Chandigarh without being too descriptive about the places. Can you please share some of your experiences in these cities?

I grew up in Chandigarh and spent most of my adult life in Delhi and Gurgaon. It helped me find a setting for the story. Culinarian, for example, is one of my favorite eating joints and I used to stay in Greater Kailash, not very far away from the fictitious Happenings Massage Parlor.

And even while I’ve lived in those cities, I can’t fathom going back and living in those cities again. I’ve been in Rainhat for over a year now and it’s the closest that you can get to heaven. I haven’t seen a traffic signal since my last trip to Delhi. I haven’t seen a traffic gridlock in months. I don’t miss any of that except the food joints that Delhi has to offer.

There are quite a few traits in the main characters and situations which would attract the contemporary youth, like – recession, classmates in love, Hindu-Sikh riots, stinky rich widows. I could instantly relate to being a recession victim. Which other factors do you think helped you to connect with the readers?

Believe me when I say this, none of this was done intentionally. You may have read the origins of The Homing Pigeons in another interview; the book was started at the height of the recession. I was with Citi then and my company’s share was cheaper than a cup of coffee. Aditya’s character was a manifestation of the worst that could happen.

The book began on my laptop in office when my boss thought that I was typing a longish e-mail. I wasn’t writing for the market – I was writing about a few things that I felt strongly about – recession, unregulated capitalism, vendetta, education, adoption, abortions and riots. I’m glad that most people think like me and so, they found it relatable.

There is a conflict of morality throughout the book. I have two sub-questions on this topic:

A lot of readers expressed dislike on Aditya being an alcohol addict. Do you think you should take a cue from this in your next books?

Aditya was not an alcohol addict. He liked to drink himself silly when he couldn’t handle the stress. If you’ve lived in Delhi or Chandigarh, you’ll find half a million Aditya’s out there.

I’m glad that I wrote my second book much before the first one was published. All this feedback tempts you to write about what will sell or what people will like. I’d rather tell my stories and create my characters as I envision them. It may mean that the publishers and the readers shun me but I’ll take that risk.

Abortion still carries a lot of moral baggage in the Indian society. Did you want to skip a controversy while dealing with this aspect in Radhika’s life?

My intention at all times was to bring forth a set of severely flawed characters that are faced with dilemmas and make not-so-intelligent or morally correct choices. And, I think I’ve been fairly successful at that brief.

You have stepped into Indian English Literature with a flair in Romance. Do you contemplate attempting any other genre in future? We’d also like to know about the projects you are working on at present.

My wife would be happy to lynch anyone who calls me a romantic. It’s just not me – I’m too severely practical and if you think that I have flair in Romance, I’ll take that as a compliment. I think it’s too early in my writing career to stereotype myself in a particular genre.

My next book, the sequel, has shades of love but you can’t classify it as a romance. The plot also has a corporate crime incident but you can’t call it crime fiction. All in all, it’s not trapped in a genre.

The next book can be called a thriller but it can’t really be one if the lead characters are a middle aged guy who works in a BPO and a terminally ill cricket coach. But, there’s also a terrorist who is working in the background. As long as the story is worth writing, I will write it and hopefully, will be able to do justice to that story.

Armed with heavy degrees, most debut authors are serving their resume with the books to the readers. You have added one more dish in your platter – an original soundtrack in Punjabi. Do you think these publicity measures weigh down quality of the book to some extent?

I’m glad that I am not guilty on the first count. I don’t have any heavy degrees to flaunt. I am very comfortable in my own skin and don’t need a resume to bring forth my identity.

The original soundtrack was an idea that came to me when I read Jodi Picoult’s Sing You Home. I thought it was a fantastic idea to pair a book with an audio-visual medium that would capture the moods and characters of the protagonists.

I didn’t have the resources to see my dream come true until I met Vineet Panchal. Panchal and I had worked together, many years ago but found our calling in different fields. I was writing in the hills and he was running a digital studio in the foothills of Dehradun.

When we first spoke about the soundtrack, we weren’t sure if we wanted to do a soundtrack in English or Hindi. I thought that the soundtrack would be more relatable if it was done in Hindi. The Punjabi number is just for the book trailer and isn’t part of the soundtrack. I wish it was, though.

I’m not sure if you’ve listened to the soundtrack. It’s music created by the same team that works on some of the most popular radio and television advertisement jingles. In all ways possible, the soundtrack only adds to the quality of the book.

Well, that was a more than amazing conversation with an equally superb writer. We wish Sid all the best for his future endeavors.

Here’s something exclusive for the readers – a set of trivia written by Sid himself, only for you.