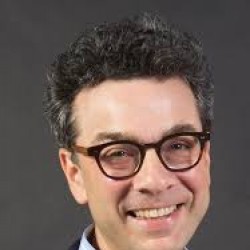 Stephen J. Dubner is an award-winning author, journalist, and TV and radio personality. He is co-author of the “Freakonomics” book series, which have sold millions of copies in 40 languages, and host of Freakonomics Radio, which gets 15 million global monthly downloads and is heard by millions more on NPR and other radio outlets.

Dubner’s journalism has also been published in The New York Times, The New Yorker, and Time, and has been anthologized in The Best American Sports Writing, The Best American Crime Writing, and elsewhere. His other books include Turbulent Souls (Choosing My Religion), Confessions of a Hero-Worshiper, and the children’s book The Boy With Two Belly Buttons.

He has taught English at Columbia University (while receiving an M.F.A. there), played in a rock band (which started at Appalachian State University, where he was an undergrad, and was later signed to Arista Records), and, as a writer, was first published at the age of 11, in Highlights for Children. He lives in New York with his wife, the documentary photographer Ellen Binder, and their children.

How does it feel to have invented, with your co-author Steven Levitt, the genre of popular economics?

We didn't, really. There was a variety of similar books in the past. I guess our first book, Freakonomics, was different, in that there were two of us. We had a division of labour. I find it ironic that none of the economists in the world who had preached the beauties of division of labour for centuries had actually ever tried it.

The freakish part is the subject matter. So, for example, you mention the word "prostitution" and people titter and get nervous. It's amazing how some topics are left unconsidered simply because they are illicit, or embarrassing, or politically sensitive. If there's one thing we rush

to do, it's find topics that are otherwise underexposed. Usually, they're underexposed for a reason, and the reason is that the methodology that we use hasn't been brought to bear on it yet. So, it's not hard for us to be freakish, though I guess at some point we'll run out of topics.

Underpinning all the examples you discuss is the idea that people respond to incentives.

Right. But bear in mind that economists do factor in incentives that are not financial. That's really important. Incentives other than financial ones are very strong: social incentives, moral incentives, and so on.

You are very influenced by behavioural economics. What do you think its principal contribution has been?

The reason that I started writing about economics, maybe ten years ago, is Richard Thaler, co-author of Nudge. When one starts to read the behavioural literature, one gets very, very excited. It's so sexy and counter-intuitive. The insights gained from behavioural economic research, when put in the hands of someone like Thaler, can work practically. For example, he came up with the idea that every time people get a raise, they should contribute a slightly larger amount to their pension and still take home more money at the same time. You basically hide the pain of saving more, and it works well for everybody. To design a good nudge, it helps to know what the research in behavioural economics has said in the past.

Sometimes it seems as if behavioural economists are claiming to have perfected a general theory of human behaviour.

Levitt and I actually ridicule, to some degree, the efforts to come up with a grand, unified theory of human behaviour through economics. Which is to say that when we hear that Homo economicus is innately x, or y or z, these proclamations should be taken with a gigantic grain of salt, especially if they are developed through laboratory research. If you can use real-world data rather than lab data to measure human behaviour, then you can gain some insights. But the insights you're going to gain are not that human beings are innately x, y or z. It is much more restricted than that. It would be that most human beings, in such and such a situation, when presented with such and such a scenario, will respond in such and such a manner. Which is much less satisfying to tabloid headline writers.

You and Levitt take great delight in some of your counter-intuitive conclusions about human behaviour.

If we were only going to reinforce what everybody thought, it wouldn't be worth writing. Perhaps the most enthusiastic sector of our readership is teenage boys, and that's because when you're very young, you're protected by your parents; you're deceived and lied to a lot. It's benevolent lying, but lying nonetheless. Then you get to the age when you start to learn the way things really work. To the human brain, that dissonance is very jarring, and this naturally leads people to become sceptical and, if they're not careful, cynical. I'd like the rest of the world to feel a bit more like those teenage boys.

Why don’t you have anything to say about the financial crisis?