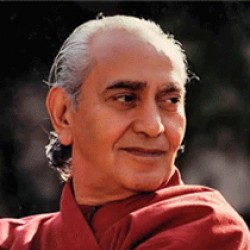 From an early age he was raised in the Himalayas by his master Bengali Baba and, under the guidance of his master,

traveled from temple to temple and studied with a variety of Himalayan saints and sages, including his grandmaster, who was living in a remote region of Tibet.

From 1949 to 1952 he held the prestigious position of Shankaracharya of Ariapita in South India. After returning to his master in 1952 and practicing further for many years in the Himalayan caves,

Swami Rama was encouraged by his teacher to go to the West, where he spent a considerable portion of his life teaching, specifically in the United States and Europe.

He is especially notable as one of the first yogis to allow himself to be studied by Western scientists.

Swami Rama authored several books in which he describes the path he took to becoming a yogi and lays out the philosophy and benefits behind practices such as meditation.

One of the common themes expressed in such books as "Enlightenment Without God" and "Living with the Himalayan Masters" is the ability of any person to achieve peace without the need for a structured religion.

He was critical of the tendency for yogis to use supernatural feats to demonstrate their enlightenment, arguing that these only demonstrated the ability to perform a feat.