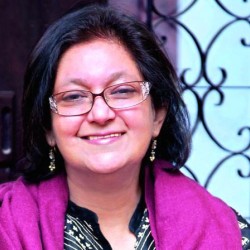 Namita Gokhale is a writer, publisher and co-director of the Jaipur Literature Festival. Her books include the novels Paro: Dreams of Passion, A Himalayan Love Story, Gods, Graves and Grandmother, The Book of Shadows and Shakuntala:

The Play of Memory and the non-fiction works, The Book of Shiva and Mountain Echoes: Reminiscences of Kumauni Women. She has also retold the Mahabharata for young readers and co-edited In Search of Sita: Revisiting Mythology with Dr. Malachi Lal.

Which character do you prefer - Paro or Priya?

Paro, the dramatic, self obsessed, larger than life protagonist of my first novel, was fun to write about precisely because she was observed through the caustic vision of the less glamorous Priya. Midway through the story, Priya says " .....I had an instinct, a faculty, for truth. I saw things as they were, not as they should have been or people tried to pretend they were.

It was this faculty for truth that had haunted me for years, distorting the happiest moments of my life, mocking love, security, happiness. Even amidst the deepest flow of emotions I could never abandon the unmoved voyeur within me, the wary spectator in the crowd, never participating, only watching. " That was what interested me about Priya.

Paro was a risqué novel, especially for its time. Was writing it a risk?

I think Paro was ironic and irreverent rather than risqué. It was a novel of the moment, it struck a chord, and I am glad that it has continued to amuse, if not to instruct, new generations of readers.

The sequel, Priya: In Incredible India, did not make waves like Paro had. What changed?

I wrote the sequel out of a sense of curiosity about what might have happened to the characters of my first book, and as an exercise in craft.

I enjoyed writing it, and I think it works, even though it stands overshadowed by the cult status faro. It's a very different voice, especially as the magnificent Paro is not there as a foil for the narrator Priya.