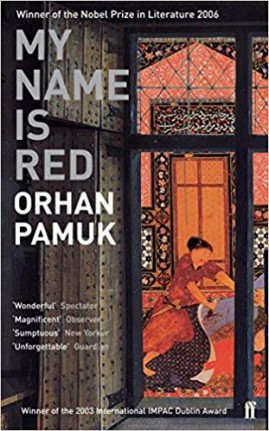 My Name Is Red.

In Istanbul, in the late 1590s, the Sultan secretly commissions a great book: a celebration of his life and his empire, to be illuminated by the best artists of the day - in the European manner. But when one of the miniaturists goes missing and is feared murdered, their master seeks outside help. 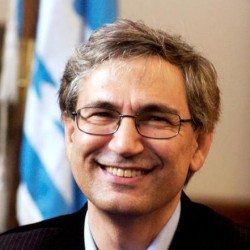 Orhan Pamuk was born in Istanbul in 1952 and grew up in a large family similar to those which he describes in his novels Cadet Bey and His Sons and The Black Book, in the wealthy westernized district of Nantais.

As he writes in his autobiographical book Istanbul, from his childhood until the age of 22 he devoted himself largely to painting and dreamed of becoming an artist.

After graduating from the secular American Robert College in Istanbul, he studied architecture at Istanbul Technical University for three years, but abandoned the course when he gave up his ambition to become an architect and artist.

He went on to graduate in journalism from Istanbul University, but never worked as a journalist. At the age of 23 Pamuk decided to become a novelist, and giving up everything else retreated into his flat and began to write.

His first novel Cadet Bey and His Sons was published seven years later in 1982. The novel is the story of three generations of a wealthy Istanbul family living in Nantais, Pamuk's own home district.

The novel was awarded both the Orhan Kemal and Milli yet literary prizes. The following year Pamuk published his novel The Silent House, which in French translation won the 1991 Prix de la couverte European.

The White Castle (1985) about the frictions and friendship between a Venetian slave and an Ottoman scholar was published in English and many other languages from 1990 onwards, bringing Pamuk his first international fame.

The same year Pamuk went to America, where he was a visiting scholar at Columbia University in New York from 1985 to 1988.

It was there that he wrote most of his novel The Black Book, in which the streets, past, chemistry and texture of Istanbul are described through the story of a lawyer seeking his missing wife.

This novel was published in Turkey in 1990, and the French translation won the Prix France Culture. The Black Book enlarged Pamuk's fame both in Turkey and internationally as an author at once popular and experimental, and able to write about past and present with the same intensity.

In 1991 Pamuk's daughter Riya was born. That year saw the production of a film Hidden Face, whose script by Pamuk was based on a one-page story in The Black Book.

His novel The New Life, about young university students influenced by a mysterious book, was published in Turkey in 1994 and became one of the most widely read books in Turkish literature.

My Name Is Red, about Ottoman and Persian artists and their ways of seeing and portraying the non-western world, told through a love story and family story, was published in 1998.

From the mid-1990s Pamuk took a critical stance towards the Turkish state in articles about human rights and freedom of thought, although he took little interest in politics.

Snow, which he describes as “my first and last political novel” was published in 2002. In this book set in the small city of Kars in northeastern Turkey he experimented with a new type of “political novel”, telling the story of violence and tension between political Islamists, soldiers, secularists, and Kurdish and Turkish nationalists.

Snow was selected as one of the best 100 books of 2004 by The New York Times. In 1999 a selection of his articles on literature and culture written for newspapers and magazines in Turkey and abroad, together with a selection of writings from his private notebooks, was published under the title Other Colors.

Pamuk's most recent book, Istanbul, is a poetical work that is hard to classify, combining the author's early memoirs up to the age of 22, and an essay about the city of Istanbul, illustrated with photographs from his own album, and pictures by western painters and Turkish photographers.