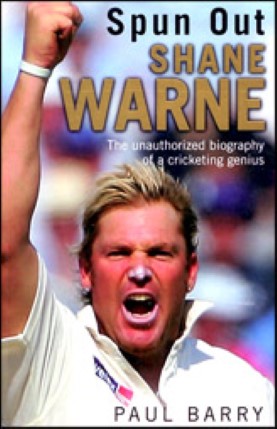 At first there were nerves and chubbiness. Then came wild soaring legbreaks, followed by fame and flippers. For a long while there were women, then a bookmaker, then diet pills, then more women - and headlines, always headlines. Now he has come out the other end, his bluff and bluster and mischief and innocence somehow intact. The man who in 2000 was rated among the five greatest cricketers of the 20th century was, in 2005, bowling better than ever.

When Shane Warne likened his life to a soap opera he was selling himself short. His story is part fairytale, part pantomime, part hospital drama, part adult's-only romp, part glittering awards ceremony. He has taken a Test hat-trick, won the Man-of-the-Match prize in a World Cup final and been the subject of seven books. He was the first cricketer to reach 600 Test wickets. He has swatted more runs than any other Test player without making a hundred, and is probably the wiliest captain Australia never had.

His ball that gazoodled Mike Gatting in 1993, bouncing outside leg stump and cuffing off, is unanimously esteemed the most famous in history. He revived legspin, thought to be extinct, and is now pre-eminent in a game so transformed that we sometimes wonder where the next champion fast bowlers will come from. For all that, Warne's greatest feat is perhaps his latest.

Returning from a one-year hiatus for swallowing forbidden diuretics, he swept aside 26 Sri Lankan batsmen in three Tests, and the following year scalped 40 Englishmen in what sometimes appeared to be a lone stand in a thrilling Ashes series. Nowadays he is helped by his stockpile of straight balls: a zooter, slider, toppie and back-spinner, one that drifts in, one that slopes out, and another that doesn't budge. Yet he seldom gets his wrong'un right and rarely lands his flipper.

More than ever he relies on his two oldest friends: excruciating accuracy and an exquisite legbreak. Except that he now controls the degree of spin - and mixes it - at will. Like the great classical painters, he has stumbled upon the art of simplicity. His bowling has never been simpler, nor more effective, nor lovelier to look at.