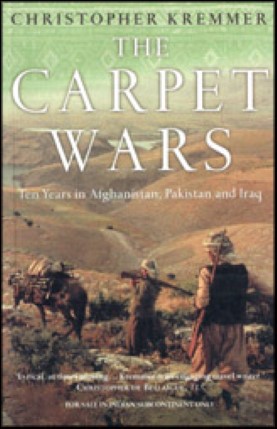 In Afghanistan, Pakistan, Kashmir, Iran, Iraq, and the Central Asian republics, carpets are viewed as objects of reverence and expressions of the highest artistic achievement. As the region's second largest export behind oil, they are also big business. "The early Muslims inhabited lands where people were born on carpets, prayed on them, and covered their tombs with them. For centuries, carpets have been a currency and an export, among the first commodities of a globalized trading system," writes author Christopher Kremmer.

Even in the midst of turmoil and war, a bazaar will spring up during breaks in the fighting and carpet merchants will quickly resume business as if nothing had happened. In this detailed look at the culture and recent history of these countries, the carpet trade serves as both backdrop and metaphor for the shadowy and complex politics of the region in which trickery, illusion, and manipulation are part of the game.

The result of 10 years spent as a journalist in the region, Kremmer's book explains how the fragile web of tribal and religious alliances and the influence of outside powers have impacted the politics and economy of the area and began a continuous cycle of exile and return, along with the rise of militarism and terrorism.

The book also serves as excellent travel writing, with fascinating anecdotes and telling conversations and encounters that illustrate the customs of a region that is now the focus of international attention. --Shawn Carkonen 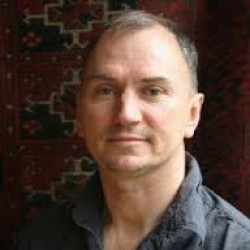 CHRISTOPHER KREMMER is the author of five books, including fiction and non-fiction, short stories and a substantial body of journalism.

Like few writers over the past twenty years, he has explored Asia's tumultuous journey from tradition towards modernity, producing a series of acclaimed books that includes THE CARPET WARS, BAMBOO PALACE and INHALING THE MAHATMA.

More recently he has turned his focus homeward to Australia with the publication of his debut novel, THE CHASE. His early short stories won several awards, including the Patricia Rappolt Prize for young writers in the prestigious Canberra Times National Short Story Competition. Other short fiction was published in Australian Short Stories.

After completing a Bachelor's degree in Professional Writing at the University of Canberra, Christopher worked in broadcast and print media in Australia. During a period spent in London he wrote comedy sketches for the long-running Canal Cafe Theatre company, and some of his work was performed at the Edinburgh Arts Festival.

His work during a decade spent as a foreign correspondent in Asia—first for the Australian Broadcasting Corporation, and later for The Sydney Morning Herald—earned him an international profile as an insightful and sensitive observer of the region.

Since returning to Australia, Christopher has spoken widely at literary festivals and other events across the nation. In 2008 he was invited by the international writers group PEN to contribute to its '3 Writers Project' leading to the publication of a series of essays, Courage, Survival, Greed. He is currently completing his doctorate with the Writing and Society Group at the University of Western Sydney, and teaches literary non-fiction writing at workshops in Australia and abroad.