Home / Books / My Own Country 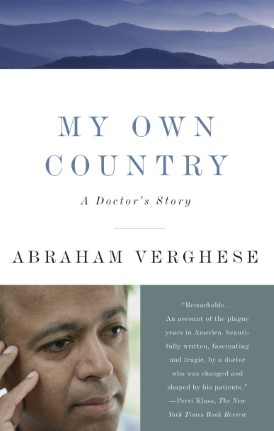 By the bestselling author of Cutting for Stone, a story of medicine in the American heartland, and confronting one's deepest prejudices and fears.

Nestled in the Smoky Mountains of eastern Tennessee, the town of Johnson City had always seemed exempt from the anxieties of modern American life. But when the local hospital treated its first AIDS patient, a crisis that had once seemed an “urban problem” had arrived in the town to stay.

Working in Johnson City was Abraham Verghese, a young Indian doctor specializing in infectious diseases. Dr. Verghese became by necessity the local AIDS expert, soon besieged by a shocking number of male and female patients whose stories came to occupy his mind, and even take over his life.

Verghese brought a singular perspective to Johnson City: as a doctor unique in his abilities; as an outsider who could talk to people suspicious of local practitioners; above all, as a writer of grace and compassion who saw that what was happening in this conservative community was both a medical and a spiritual emergency.

Abraham Verghese (born 1955) is an American physician, author, Professor for the Theory and Practice of Medicine at Stanford University Medical School and Senior Associate Chair of the Department of Internal Medicine. He is also the author of three best-selling books, two memoirs and a novel. In 2011, he was elected to be a member of the Institute of Medicine. He received the National Humanities Medal from President Barack Obama in 2015.

He was born in Ethiopia to parents from Kerala, India, who worked as teachers. In 2009, Knopf published his new book and first novel, Cutting for Stone. In 2010, Random House published the paperback version of the book and since that time, it has risen steadily up the bestseller charts, ranking #2 on The New York Times trade paperback fiction list on March 13, 2011. It has been on The New York Times list for well over two years. In 2014, Dr. Verghese received the 19th Annual Heinz Award in the Arts and Humanities.