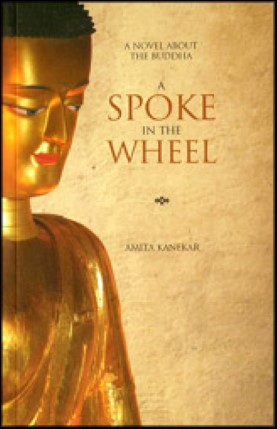 A Spoke In The Wheel.

A Spoke in the Wheel is an epic story alternating between two narratives -- the story of the Buddha himself, and his times, told not as frozen legend, but brought to life with historical detail and craftsmanship. The parallel narrative is that of the chronicler, Umali, a Buddhist monk living in the time of the Mauryan Emperor Ashoka, three hundred years after the Buddha's death.

Umali, an embittered survivor of Ashoka's infamous conquest of Kalinga, attempts to recover from the horror of war and destruction by writing the "DE glorified and factual" story of the Buddha's life and teachings.

This turns out to be a difficult, even dangerous exercise, for Umali is swimming against the tide, at a time when the Buddha's Sangha is poised to rise to immense imperial patronage and splendor under Emperor Ashoka. This is a patronage that will sustain Buddhism for over a millennium and help it reach out to half the world's populace.

A Spoke in the Wheel is a story of the Buddha and his disciples “among them an ordinary monk plagued by many questions, and an extraordinary king who seemed to have all the answers and was bent on unifying Buddhism's many schools of thought and making Buddhism his state religion.

Kanika, who teaches comparative mythology at the University of Mumbai, has said that she began writing her novel on the Buddha in 1998, as the first step in a personal quest to understand India's forgotten social and political revolutions, the historical conditions in which these movements were born, what they achieved, and how these achievements tended to get lost over time in myth and legend.

In a statement released about the book Kanika says she has seen the Buddha as a "historical figure who lived in the foundational epoch of Indian civilization, whose life and struggle are now almost completely lost in myth, and whose ideas evolved to mean very different things to different people, yet continue to resonate with an all-inclusive and rational message of peace even today, 2500 years after they were first propagated." 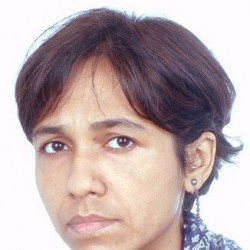 Amita Kanekar is a Goa-based writer and architectural historian, whose well-received debut novel A Spoke in the Wheel was published by Harper Collins Publishers and later again by Navayana.

Kanekar's second book was a guidebook to Portuguese sea fort architecture of the Deccan, while her third was another novel, Fear of Lions, published by Hachette in 2019.

She also writes essays and newspaper columns on architecture, history, and politics, and also teaches architectural history and theory at the Goa College of Architecture.