Home / Books / Discover The Diamond In You. 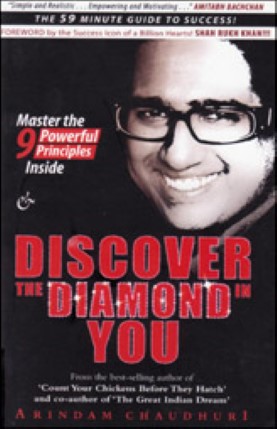 Discover The Diamond In You.

"This one, which you are holding in your hands, I can assure you is a real diamond . . . The 9Ps of success that Arindam so swiftly and lucidly narrates will help you overcome failures and achieve success - because we all need some guidelines when we are down . . . This book is guaranteed to inspire you and it will definitely get you started on your path to discover the diamond within. There is a lifetime of learning squeezed into this innovative book.

59 minutes is all Arindam asks from you and you will have a more positive approach to your life forever. I finished this book in 59 minutes flat and it read like a story I have often lived and experienced. You too will discover a part of yourself in these pages and get inspired." "Simple and Realistic ... Empowering and Motivating ..." AMITABH BACHCHAN FOREWORD by the Success Icon of Billion Hearts! SHAH RUKH KHAN!!!

Arindam Chaudhuri is the Hony. Dean at the Centre for Economic Research and Advanced Studies at IIPM, India's leading B-School. He is also the founder of the Planman Group which has business interests in Consulting, Media and Entertainment and the Editor-in-Chief of The Sunday Indian - the only news magazine in the world that comes out in 14 languages.

The author of Planning India as well as the bestselling books, Count Your Chickens Before They Hatch and Great Indian Dream, he teaches Leadership and National Economic Planning at IIPM. His public seminars on Leadership are a rage with thousands attending them. Since 2001 he has been annually presenting a much-watched 'Alternative Budget' programme on TV, on the day before the budget is announced. He has won numerous awards for his work and in 2004, at the age of 32, he was selected as an advisor to the consultative committee of the Planning Commission of India in the Education & Social sectors.

Under the banner of Planman Motion Pictures he has made several highly acclaimed films and was awarded the National Award for Faltu in 2008 and The Last Lear in 2009. He is also the founder of the charity, Aurobindo Chaudhuri Memorial Great Indian Dream Foundation, which works in the areas of health, education and employment.